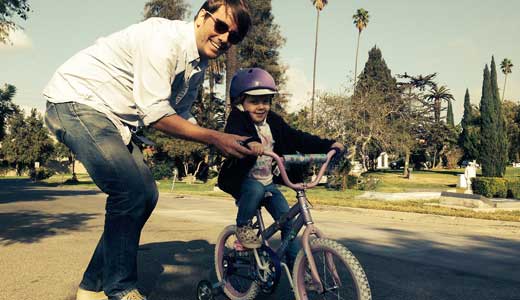 Growing up in Louisville, Morgan Lebus wasn’t necessarily one of the cool kids. When he started discovering underground music in middle school, his first favorites were bands from the Washington, D.C., Dischord scene. But he found them by following other kids to shows at unconventional venues like the Another Place Sandwich Shop on Frankfort Avenue. Now, 20 years later, he works out of the massive CNN building on Sunset Boulevard in Hollywood, next door to the Amoeba Records store, running an indie label that has helped several hip bands reach an international audience.

Growing up preppy on Mockingbird Hill Road, Lebus felt out of place among crowds that then included some less-than-tolerant skinheads. “It was very Mad Max-y for me,” he laughs. But he soon fell in with kinder, gentler punks like Endpoint. The band Evergreen led him to look into local music’s recent, more artsy history. When members of Pavement and Sebadoh moved to Louisville, Lebus started down his indie rock path.

At the turn of the century, while bored at a job in New York, Lebus was recommended for the job of tour manager for a Scottish indie band, Arab Strab, who were selling out shows nationwide, by mutual friend Dave Pajo, the guitarist and a fellow Louisville native. Lebus hired Louisville musician Paul Oldham to join as their live soundman. “It was a blast. It was transformative. It was the first time I’d ever traveled across the country,” Lebus says. Oldham’s brother Will, of Bonnie “Prince” Billy, soon asked Lebus to manage his tour, and then Pajo did, too. He also briefly managed each artist and made some “mediocre” videos with them and other acts.

Through Brown School classmates Pajo and Will Oldham, Lebus met Laurence Bell, whose London-based label Domino released their records in Europe. Lebus began sending Bell demos of unsigned New York bands he liked. After Domino broke through with their band Franz Ferdinand, Bell expanded his American office, hiring Lebus in 2006. Lebus was then able to help bring bands he knew, like Animal Collective and Dirty Projectors, to the company.

Lebus started his label — which also includes publishing services — as a spin-off of the similar but larger Domino after working there for five years. After Lebus suggested signing a few bands that Bell passed on, and then watched those bands become successful with others, Lebus decided to try something fresh. He and Bell began Ribbon Music as a joint venture, with Lebus as the boss making the decisions.

He moved to Los Angeles to give his growing family more space, while staying close to his industry’s power center. Some of Ribbon Music’s acts now include Laura Marling, Django Django and Thao & the Get Down Stay Down, artists who appeal to both Pitchfork readers and public radio listeners.

In describing where his career has taken him lately, Lebus makes an analogy grounded in a Louisville upbringing. “I didn’t want to be an A&R guy forever. The lifespan of that is like a thoroughbred.”