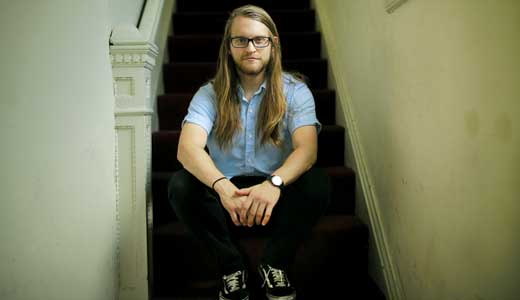 If you are a fan of local punk and indie, chances are you’ve already seen some of Max Moore’s work. A young filmmaker, Moore has worked with local luminaries like Coliseum and Xerxes, as well as national acts like Converge and Into It. Over It., to make stylized music videos that serve as a visual narrative to the music contained therein.

Moore’s interest in film started early and has only grown with time. When asked about the origins of his status as a cinefile, he notes, “Though I didn’t consciously realize it at the time, the first thing I really connected with while watching films from an early age was their ability to completely captivate me inside their visual story. Since the moment I picked up my dad’s VHS camera at age 8, I think I already understood the power of that trickery. I was hooked.”

There is only one solution to the stress of working up a good treatment. “Whenever I’m writing for a music video and I’m running low on inspiration, I put the song on repeat and walk over to Cherokee Park to this specific tree overlooking the park. For some reason, I’ve come up with some of my best and most successful music-video concepts while sitting under this tree. So when all else fails when writing for videos, my lucky tree is always my backup plan.”

Much as he found an early interest in film, Moore grew up around music and musicians. “Growing up, I was always involved with music in one way or another — whether that was playing in bands, touring with friends’ bands or just going to shows,” he says. “It was, without a doubt, the center of my adolescence. I really saw the transition become apparent when I decided to attend the film program at Western Kentucky University. Before long, I was directing videos for my friends’ bands, then my friends’-friends’ bands, and it just snowballed from there.”

What advice would Moore give an aspiring artist? “If there was one thing I could say to aspiring filmmakers who are just starting out, it would be to approach your work with a DIY and aggressive spirit. So many people have preconceived notions that they need to live in a certain city, own a certain camera or know the right people before they can even start thinking about making things worthwhile. But that’s just not the case. If filmmaking is something you are serious about, the only way to achieve any level of success is to get up off your couch and make something.”