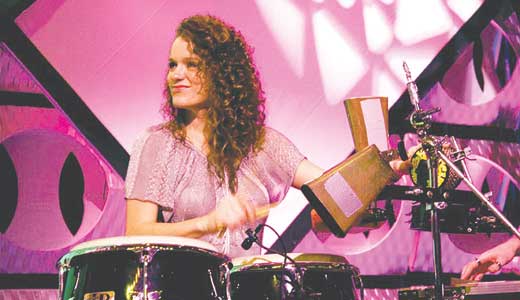 Dani Markham was there when elementary school teacher Diane Downs found abandoned instruments in a closet in the early ’90s. “She was, like, ‘Look what I found! Let’s do this.’ And we started a group.” The group Downs started is now called the Louisville Leopard Percussionists, and it has become known globally. In the group’s first year, young student Markham was stuck in a classroom next to Downs’. “I was just envious,” Markham says, “Like, ‘How can I get over there? How can I do that? I want to play all those songs.’ So it was so exciting when I went from second to third grade and we got to play.”

Along with Prince drummer Hannah Ford, Markham is part of the first wave of LLP alumni to begin making their own mark on the global stage. Markham now plays percussion with the Oakland-based avant-pop band Tune-Yards, who play this weekend at the Forecastle Festival.

As a Leopard, Markham also enjoyed the support of her parents. Her mom was the roadie, taking the seats out of the family’s van to haul instruments to every show. “She never missed one beat,” Markham says, unintentionally making a drummer joke.

She continued at YPAS, where she focused on symphonic and orchestral percussion, playing with a percussion ensemble and taking private lessons with Todd Parker. In college at Florida’s University of Miami, Markham began learning about different world percussion rhythms and grooves, studying with a Brazilian instructor. After graduation, she stayed for a couple of years, but soon realized she needed even more options. So she moved to New York.

While that’s often where the story begins, it didn’t happen that way for Markham. She decided she should be on the West Coast instead, where her road trip took her to Oakland, a city that had become home to some Miami colleagues. One weekend, she played at a big tribute event, where she encountered hundreds of musicians she had never met. Two of them separately emailed Markham to tell her about an upcoming Tune-Yards audition. “Things were just making sense. When it happened, it was, like, ‘This is weird, but this is awesome.’”

At the audition, she says, “It was just love at first sight for me. So it was the best audition experience I’ve ever had.” She went in relaxed, having arrived in town recently and not expecting something big to happen in Oakland. “It was just fun. It was, like, ‘Cool, I have to learn music.’ It reminded me of being back in school, because (bandleader Merrill Garbus’) music is so intricate. She wanted me to sing and play percussion at the same time, so learning those patterns, I had to put in the time.”

In little time, Markham was touring the world, and she recently made her TV debut on the Jimmy Fallon-hosted “Tonight Show.” She loves traveling and doesn’t expect to settle down soon. But she will always love us, she says. “Once you leave Louisville, you can never really leave.”