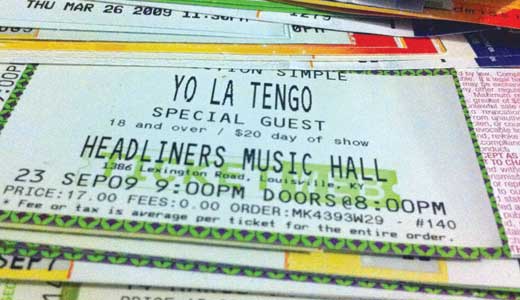 I’ll never forget March 2, 2013, when Tame Impala played Headliners. The Australian band had been playing 1,200-3,000-capacity venues and festivals, and Louisville was seeing them in a 700-capacity room. The tickets were announced months before, and you could feel the excitement all over social media and at bars when the show was brought up. It took until the day of the show for it to sell out. Out of nowhere, Facebook was overcome with post after post pleading for tickets; a young man approached me outside of Headliners before the show, almost in tears, asking for an extra ticket to see his favorite band.

What happened? The band the Henry Clay People have a great lyric: This ain’t a scene, it’s just a place to be. This is an important quote for Louisville, because too often, large groups want to be where everyone else is hanging out rather than blazing their own path.

The biggest question I’m faced with is, “The show sold out … why does it matter?” This question is the answer to the most common question: “Why won’t ___ play Louisville?” Booking agents keep precise databases of every town and venue their bands play. If that Tame Impala show sold out the week tickets went on sale, red flags would have shot up for that booking agent, and you can bet the band would be back as soon as possible.

When a show sells out the day of, booking agents aren’t sure if it was the band or circumstance. I know from throwing shows that if it rains, I can lose half of my expected attendance. Are there any other big shows that night? A sellout doesn’t tell a booking agent enough; a sellout way in advance tells them everything.

Probably the most important reason why you should buy advance tickets is the hardworking talent buyers here. They are directly responsible for making Louisville part of the “best music scene in America” conversation. Put yourself in their shoes — there are only two ways to gauge how a concert is selling: 1) advance ticket sales and 2) its Facebook event page (but those numbers are never to be trusted). Let’s say one of these talent buyers has seven advance ticket sales for a 400-capacity room. They will reach into their wallet even more and buy radio and print ads, hang more posters, do giveaways and more, even though in Louisville, such a small amount of advance sales can ultimately lead to a sold-out show.

The last defense I hear is probably my least favorite and the cause of many frustrations: “I didn’t even know ___ was playing in town until the day of, and now it’s sold out!” Pick up a LEO Weekly, and like, follow and read other great local music news sources.

The next time a band you love announces they’re playing, buy your ticket right away, and don’t worry if it’s the place to be when the time comes: You’re there with the band you love … that’s all you need.