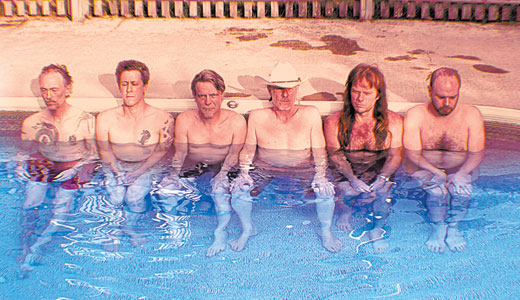 I was more than a little intimidated by Michael Gira. Noted for his work with Swans and Angels of Light, Gira has been making critically acclaimed music, music I love, for longer than I’ve been alive. It wasn’t just the anxiety of a misplaced or poorly researched question that filled me with dread, but rather the mythology around Gira as a larger-than-life, take-no-nonsense iconoclast. The Gira in my head was a rage-fueled Bukowski demon, which was the furthest thing from the truth; Gira certainly had a smoldering intensity about him, but he was easy to talk to and polite, neither of which I’d expected.

What I certainly didn’t anticipate was to laugh. Even a cursory listen will reveal that this most recent incarnation of Swans is a well-oiled machine, and one comprised of longtime contributors. Gira confirmed what I believed — that this current lineup, which features longtime Swans collaborator Norman Westberg, along with many other familiar faces, represents the band reinvigorated by rebirth. When asked if there was anyone he didn’t manage to nab for his dream team, Gira laughs, “I had very much wanted Tiny Tim to be the lead singer, but he was unavailable.”

With a 30-year-plus career, it’s hard to know exactly what you’ll get from a Swans set. Still, the one thing that seems to be universally agreed upon is the pathos put into the playing, that each set is a cathartic experience. Or so I’m told. Asking Gira about this phenomenon — that people I know have personally described seeing this iteration of Swans as life-changing — Gira shrugs. So what is it that makes a great set? According to Gira, “Commitment. How do you describe what makes for the best, most spiritual sex? I think you don’t. It’s about being in the moment and total commitment.”

This commitment has tangibly manifested into some very long tracks over the past few albums. Each successive entry into the Swans canon seems apt to embrace digital technology to its fullest, at least by ignoring any sort of traditional time constraints. How do you saddle such a beast and rein in your songs? “You don’t, really,” Gira says. “They grow organically. If you listen to the song ‘Bring the Sun/Toussaint L’Ouverture,’ where it starts and where it ends with ‘Toussaint’ … that happened through intuition, from us playing and the dynamics of us playing and committing to something. It’s not like a prog-rock kind of thing. It’s something that grows.”

Gira explains the band’s writing process. “Almost every song starts with an acoustic guitar. So I write them there, I sing them, I start working with the guys and we build them up. There was this (32-minute) long piece, ‘The Seer,’ from the last album, and at the end, as it opened up and became this spacious thing, we started adding all these grooves and ideas to it, and adding new ideas on stage. The rest of them grew out of these … I don’t want to call them freeform, but they grew out of the need to make something live. We’re doing both of these songs live.”

Inspiration is more than just a reflection of your environment, Gira says. “My art or music, that’s all a product of what I’m reading, with whom I’m having sex, who I hate, who I love. It’s not being too precious about your experience, and hopefully making something bigger than yourself. There is a song on the record, ‘Kirsten Supine,’ (I wrote) after seeing a beautiful film by Lars von Trier called ‘Melancholia.’ In the early days of Swans, you could’ve linked it to early NYC, but since then, the influences grow out of themselves.”

So what’s next? For Gira, the difference between the birth and rebirth of Swans is vast. “In the early days, there was no future. And now, perhaps there isn’t, but there was a considerable past,” he says. “I’m still working in pretty much the same way, but maybe with a little more experience. It was just everything in the moment. I didn’t think about the future — I didn’t care at all.”