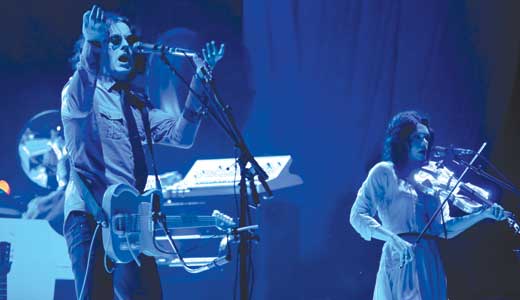 Forecastle is about more than just music. Now, I’m not talking about the art and environmental activism stuff, because however awesome and important those things are, the majority of attendees seem to ignore them. What I’m talking about is the atmosphere.

I want to believe that I will never forget the utter dominance that was Jack White’s extended set, or the adorkableness of Beck covering Michael Jackson, or the pride I felt seeing the outpouring of support for local act Jalin Roze, or the way Jenny Lewis made me feel like a Lisa Frank sticker, or a dozen other memorable moments from the three-day festival, but the only thing I really know I will remember about Forecastle is its “come as you are” vibe.

At one point in the weekend, I found myself sitting next to two middle-aged couples (who were chatting about concerts they attended in the ’80s) and a gaggle of college-aged kids in high-waisted norm-core booty shorts (they were busy helping that one friend everyone has who got too drunk). Neither group batted an eye at the other. We just all shut up, smiled and started listening. —April Corbin

You can keep your international main-stage headliners and radio-friendly flavors of the week — the majority of the performances I was looking forward to at this year’s Forecastle were from locals, and I don’t think my personal biases can fully account for that. I’m not even mad it was rainy and actually a little chilly during Old Baby’s set, the first performance on WFPK’s stage Friday afternoon. As frontman Jonathan Glen Wood noted during a batch of mostly new songs, sunshine doesn’t suit the band’s doom-ridden, sex-starved psychedelia anyway.

Jalin Roze may not have the same cult of personality that surrounds a larger-than-life legacy act like Outkast, but with songs like “How We Do,” which repurposed that duo’s classic “SpottieOttieDopalicous” beat with a full live band, the Louisville rapper made a pretty convincing argument in favor of the new generation over yesterday’s heroes.

Of course, the monolithic local institution Slint should be news to nobody by now, and there’s a good reason why we keep inviting them to trot out their 20-year-old tunes: They took rock music somewhere it had never been before in the ’90s, and they deserve all the credit in the world for that. But local torchbearers Anwar Sadat and Seluah, in their own starkly contrasting ways, have both picked up key elements from the Louisville school of rock standardized by Slint and taken it in previously unheard directions, and both bands showed Forecastle precisely why we consider them among the cream of the crop. Let’s hope it doesn’t take another two decades for the rest of the world to catch up. —Sam Benanti

Next year’s Forecastle should feature a band named Polar Vortex, because, let’s be honest, it was the clear highlight, and a return appearance would be more than welcome. The weather was incredibly mild for two-thirds of Forecastle 2014; sure there was some drizzling rain, but it was never soaking and was just enough to mist eyeglasses and make you check park benches before taking a seat. Sunday reminded us of years past with temperatures in the 90s and oppressive soul-baking sun.

Never mind all that, I got to see Outkast! The duo put on a great set, just back from the European leg of their 40-date reunion tour (and judging by Andre’s “Sold” tag attached to his outfit, probably our last opportunity to see them together). New Orleans brass band the Soul Rebels put on the most enjoyable set of the weekend, but don’t leave out Jalin Roze’s continued takeover as one of Louisville’s premier live acts.

The Forecastle crew deserves congratulations for the most efficiently run experience possible, with every act starting on time, only one cancellation and nothing newsworthy happening except three days of great music. This was my third Forecastle, and most enjoyable. Let’s celebrate next year for my Fourthcastle with Prince and the Roots. (Pretty please?) —Damien McPherson

This was one of the few weekends when people could praise the clouds rather than the sun. It was a gray Forecastle weekend, and, as a result, attendees could save a little cash on sunscreen rather than bake in the humid, Ohio River-adjacent onslaught of sun years past have brought. The music, however, was anything but dreary. The first night’s headliner, Outkast, put every other Friday act to shame.

Saturday night was the highlight for me, however, as Jack White obliterated the main stage and put on a perfect performance. It was the best show at Forecastle since My Morning Jacket in 2012. You should have been there. Jalin Roze and Band of Horses also put on great shows.

Sunday was more laidback. Blue Sky Black Death and Reignwolf surprised me, and seeing Billie Joe Armstrong (with The Replacements) do something that wasn’t Green Day after Warning was pretty cool. The Ocean Stage sported many a crowd surfer late in the weekend. —Ian Ording

Tweets: Relive the festival 140 characters at a time

Day One: Change scares me, but Outkast delivers