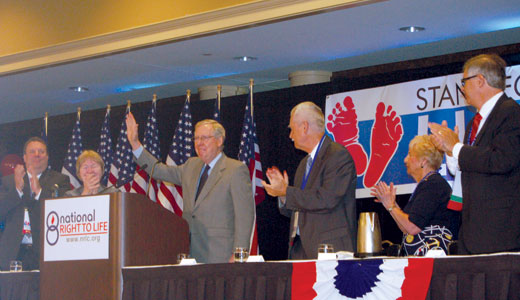 The National Right to Life Commission (NRLC) held their national convention in Louisville this weekend at the Galt House, rallying supporters to their cause of ending legal abortion in America. Their featured speaker Saturday morning, Sen. Mitch McConnell, told a slightly more than half-full conference room that “the tide is turning” on the issue, and he would help the anti-abortion advocates win their fight.

“I’m not sure when it first occurred to me that we are winning this debate, but there’s no question that we are,” said McConnell. “The signs are everywhere, and you have played a huge role in that.”

One of those signs came two days later, when a 5-4 Supreme Court decision ruled in favor of the craft store Hobby Lobby, who argued that they should be exempt from an Affordable Care Act mandate that they must provide their employees coverage for four types of birth control the company considers “abortion,” because this violates Hobby Lobby’s religious freedom. Despite no legal or scientific basis for that claim, the court ruled that “closely held” private companies — which make up 90 percent of American companies — are exempt from this mandate if they claim it goes against their religious beliefs, granting such companies the same religious rights as persons.

With the current makeup of Congress and the Supreme Court, Roe v. Wade does not appear in imminent danger, but abortion opponents openly celebrated the Hobby Lobby ruling as an advancement for their larger cause of chipping away at women’s reproductive rights. At last weekend’s convention in Louisville, McConnell urged attendees to help elect him majority leader of the Senate this fall so he can push through legislation banning abortions past 20 weeks of pregnancy, which has already passed the House.

Two Republican congressmen from Kentucky, Representatives Andy Barr and Brett Guthrie, who also spoke Saturday morning, are co-sponsors of legislation that would not only ban all abortion in America — with no exemptions for rape, incest and health of the mother — but could go further than the Hobby Lobby decision, banning many forms of birth control.

While Democrats have termed the Republican Party’s attack on reproductive rights — as well as opposition to equal pay legislation and the Violence Against Women Act — as a “War on Women,” McConnell and several speakers at the convention flipped the script, accusing Democrats of waging the “real” war on women — for allowing female fetuses to be aborted and giving women a legal option to terminate a pregnancy.

“Kentuckians who want to do something to fight back against the growing discrimination we’ve seen against unborn girls in this country, through sex education abortion, aren’t even being allowed to vote on this issue in the U.S. Senate,” said McConnell.

McConnell claimed to be a supporter of “every” pro-life bill in the Senate, but accused Democratic Senate Majority Leader Harry Reid of blocking a vote on every one of these bills, “however modest they may be.” In fact, there is one piece of legislation in Congress that McConnell has not signed onto as a co-sponsor — the Life at Conception Act — that is certainly not “modest,” nor was it mentioned at last weekend’s convention.

The Life at Conception Act, sponsored by Sen. Rand Paul, would give fertilized eggs equal protection under the 14th Amendment and does not provide any exemptions for rape, incest or health of the mother. Pro-choice advocates logically assume this could not only make all forms of abortion illegal, but could ban any form of birth control if it is deemed to make the implantation of a fertilized egg in the uterus more difficult.

Such “personhood” legislation is popular among far-right abortion opponents but is shied away from by groups like NRLC and many establishment Republicans, who view such legislation as electoral poison with voters. Reps. Barr and Guthrie are two of the three Republicans in Kentucky’s U.S. House delegation to co-sponsor the Life at Conception Act.

At the convention, Barr decried Democrats for not having “empathy for” or respecting the “privacy of” women going through an unplanned pregnancy, calling Planned Parenthood “an abortion factory in disguise that has nothing to do with planning or parenthood.” Barr added that Democratic concerns for the life and health of the mother “has become a cover for late-term abortion on demand and the even greater horror of infanticide.”

After his speech, Barr told reporters that the only two issues related to abortion before Congress are bills limiting abortion to 20 weeks and defunding Planned Parenthood. Asked by LEO about his sponsorship of the Life at Conception Act and its lack of exemption for rape victims, Barr replied, “The Life at Conception Act makes sure that unborn children have 14th Amendment protections. So thank you all very much, I have another meeting,” and walked away. According to a questionnaire Barr filled out from Kentucky Right to Life, he does not support an exemption for rape victims and supports banning birth control preventing fertilized eggs from attaching to the uterus.

After initially telling LEO he is not for banning all forms of birth control, Rep. Guthrie then conceded that emergency contraception would be banned under the Life at Conception Act. When asked why rape victims should not receive emergency contraception, Guthrie said that such exemptions should be added to the bill. “We’ll see as the bill moves forward how to correctly do it,” said Guthrie.