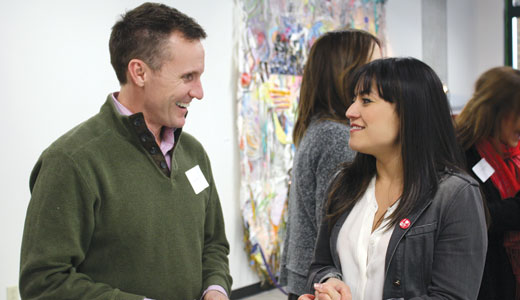 Not surprisingly, everyone is drawn to the booze first. Set up at a table in the back of the Central Park information center in Old Louisville are unlabeled mason jars filled with liquids of assorted colors — one of them might be mistaken for Mountain Dew, at least until that unmistakable smell overwhelms you. This is Kentucky-proud moonshine, and samples are free flowing.

The hawker of the product, which despite the lack of labels tonight is most definitely legal and not made inside a bathtub, is Raymond Tri. In about 30 minutes, after everyone’s had a chance to sample all three of the available flavors, he will address the crowd and tell everyone about this line of flavored moonshine, Amendment 21, and the business behind it, Southern Shine. He will impress people by explaining that at 80 and 121 proofs, his ’shine will be the strongest on the market. He will also field questions about his distilling process and long-term plans for the business.

Then will come the final question: What do you need?

This question serves not only as the backbone for this reoccurring event, called Mix+Pivot, but also for the organization that hosts it. IDEAS 40203 — technically short for International Dialogue and Engagement Art Space + Zip Code, though nobody refers to it as that — is all about needs: those of the community, of business, of artists, of entrepreneurs. Its position is that all of those needs are one and the same.

“They all dovetail quite beautifully together,” explains founder Theo Edmonds. “That’s how a community is built. It’s built on all these little networks.”

Of course, Louisville is home to plenty of mixers and meet-ups that aim for that same goal, especially among the startup tech community. What sets Edmonds and IDEAS apart are the organizations that have bought into the concept. IDEAS began as a collaborative exhibition between the Old Louisville Chamber of Commerce and New York City-based contemporary art organization Residency Unlimited. (Edmonds says he wanted to bridge the gap between the two cities and “show New York what was going on in Louisville.”) From there, it grew into the first contemporary arts chamber of commerce in the country.

“We are the creative catalyst,” says Edmonds. “We help create leaders from artists and help leaders be creative. We are a synthesis of art and economic development.”

That is a synthesis Edmonds knows well, having grown up in eastern Kentucky and “bought into the script” that success can be judged by corner offices and fancy business cards. He earned a law degree and a master’s degree in health administration, and advanced far within the industry before he acknowledged what he calls “the transformative power of the creative,” and left to pursue that calling, which led him to another degree (this one a master’s of fine arts) and eventually to a position at Residency Unlimited.

Business and contemporary art have more in common than many realize, he says. “They both have the same kind of barrier. They can be inaccessible to the everyday person.”

It is with this in mind that Edmonds honed in on 40203 as the nonprofit’s zip code of choice, though in practice their work extends far beyond its gerrymandered borders. Named the 13th poorest zip code in the country, the area includes the Smoketown and Limerick neighborhoods, as well as parts of Old Louisville and Portland.

“The thing I’m passionate about is fairness in all forms,” says Edmonds. “It’s time for an honest dialogue. We seek the right answers. We need the right questions. Artists are really great at asking those types of questions.”

Within the past year, IDEAS has delivered on their vision of meshing community, art and economy, and not just through the small but meaningful interactions at reoccurring events like Mix+Pivot.

They partnered with the Louisville Fund for the Arts, the Louisville Visual Art Association, and Jefferson Community and Technical College to provide a crash-course in business for amateur artists not yet making a living off their passion. They’ve been a part of curated local business accelerators alongside established programs Velocity, Forge and XLerateHealth. In the wake of the so-called teen mob violence in Waterfront Park and downtown, they held a series of poetry and music performances across town that explored the theme of art as a disruption to the cycle of violence. They’ve sponsored local artist residencies. Oh, and they raised more than $5,000 to send at-risk Kentucky youth to Versailles, France — yes, France.

IDEAS’ latest endeavor is even bigger. Last week, they announced they have received a $250,000 ArtPlace America grant to develop a “Creative Innovation Zone” in Smoketown. The highly competitive grant was awarded to only 55 of the nearly 1,300 applications received nationally. With the money, IDEAS will work to develop economic, educational and environmental infrastructure within the low-income community by placing artists and innovators in roles within the revitalization efforts.

The project builds off the $101 million development project of Sheppard Square, which was demolished in 2012 using a HOPE VI grant from the Department of Housing and Urban Development and only recently reopened (partially) to mixed-income residents.

“We now have this amazing opportunity,” says Edmonds. “Now, it’s about figuring out how do we do this incredibly well, in a way the community will be proud of?”

Edmonds believes that answer will come as everything before has — through collaboration. YouthBuild Louisville, whose office is located in Smoketown, is their primary partner for the innovation zone, and Louisville Metro, Kentuckians for the Commonwealth, and IDEAS’ sister organization Residency Unlimited will be some of the key partners.

“What people are starting to realize is, this is about form and function,” says Amelia Gandara, an IDEAS board member. “We have to have both. We have to have this creative side along with the functional. You can put houses anywhere, but unless there’s systemic value in the community, nothing gets better. I think we bring that side.”

If anyone understands the marriage of the two hemispheres of the brain, it’s Gandara. She came to Louisville as a professional ballet dancer but left the industry after earning an engineering degree from the University of Louisville. Now, she’ll use both her creative and analytical side as a community builder at GE FirstBuild, another local outpost who’s partnered with IDEAS.

IDEAS and FirstBuild are collaborating on the latter’s maker’s space, which will be located on Brandeis and Floyd, near U of L. GE will supply artists provided by IDEAS with technical tools they might otherwise not have access to, and artists can provide fresh, outside eyes on appliance design or other projects engineers are working on. This new “innovation initiative space” is set to have its official grand opening at the end of July.

When asked whether he expected IDEAS to be as involved with as many projects as it has in its year of existence, Edmonds comes up blank, then adds, “We’ve been so busy working. I don’t think we’ve had time to think about that.”