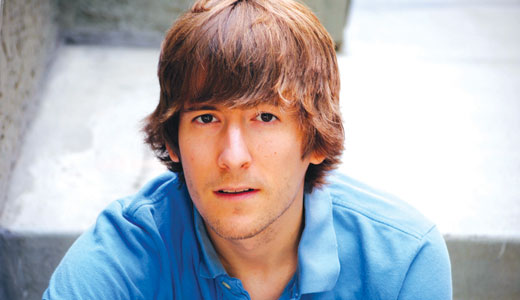 Rob O’Reilly is wicked funny. The Cleveland native works hard as a touring comic with an impressive and continually growing resume. He’s appeared on “The Tonight Show with Jay Leno,” “Last Comic Standing” and “America’s Got Talent.” He also worked as a correspondent on MTV’s “Total Request Live” and currently works as a writer/producer on MTV’s “Ridiculousness.” I caught up with him at home in Los Angeles to talk about his upcoming shows here at the Laughing Derby.

LEO: Who were the most influential comedians to you?
Rob O’Reilly: Dave Attell, Jim Gaffigan, Mitch Hedberg, Brian Regan — mostly guys who had Comedy Central half-hour specials in the late ’90s.

LEO: It’s interesting seeing the young comedians revere them, the way those guys revered Carlin and Pryor.
RO: Yeah, it happens generationally: There’s a changing of the guard. And I’m sure Pryor and Carlin and those guys were looking at Lenny Bruce. It just happens that way.

LEO: What’s the worst gig you’ve ever had?
RO: It was a company Christmas party, and no one knew there was going to be a comedian, and then all of the sudden they stopped the party and were, like, “OK, everyone, quiet down and listen to this comedian.” It was pretty awful. They paid me in advance, so as soon as I got off stage, I just ran out to my car and left.

LEO: Did you have any crappy jobs before becoming a comedian?
RO: Yeah, I was a cashier at a grocery store and a K-Mart, too. I used to have to get drunk just to get through my shifts … I probably spent more money getting drunk than I made at that job.

LEO: What’s the biggest sacrifice you made to become a comedian?
RO: Financial stability, relationships — just the normal life of an adult male. And it’s a lot of traveling and not much money.

LEO: Is there anything that isn’t allowed to be made funny?
RO: No, I think the darker something is, the funnier the potential is, because if you’re making light of something that’s horrible, it’s ironic that you’re making light of it — that irony is funny to me. But I stay away from those topics usually. I have rape jokes, but I tend not to tell them. Because if one in six women has been raped, I know there are probably people in the audience who have had difficult experiences they don’t wanna be reminded of while having fun in a comedy club.

LEO: People tend to say comedians are always unhappy people. Is that true?
RO: For the most part. I think I would be a lot more successful if I were less content. The more messed up your life is, the more fodder you have, the more material you have, funnier issues to talk about. Good storytelling involves conflict, and the more conflict you have, the better story you have to tell. But sadly, overall I’m pretty content.