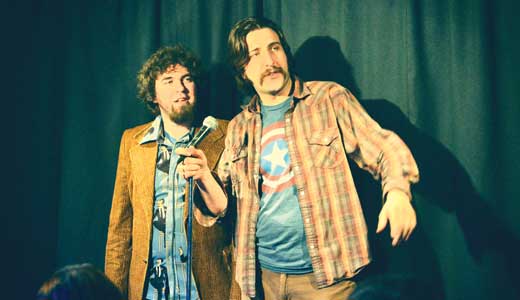 Have you ever opened your eyes on a Sunday afternoon, realizing your head feels like there’s a marching band stomping around inside? Maybe there’s dried chunks of something that may or may not be vomit plastered to your shirt, and perhaps you’re not 100-percent sure you know the name of the person lying next to you? These are the Sunday afternoons “The Late Late Breakfast” was designed for: zany, unpredictable comedy in a place with booze, a full menu and free donuts. What more could a hangover ask for?

The show began in the lobby of the Comedy Caravan. Founding comedian Tyler Jackson later moved to Chicago and left “The Late Late Breakfast” in the hands of his friends and fellow comedians Jake Reber and Kent Carney. Recently, it has found a new home at The Cure Lounge in Germantown. “When the new owners of (Comedy Caravan, now the Laughing Derby) came in, we felt like the red-headed stepchild,” Reber says. “We felt like we were a burden to them, and they weren’t really interested in keeping the show — at least that was the impression I was left with … so I moved it. Now we have a little more freedom, more elbow room, and it looks more like a comedy show than it ever did at the club.”

Audiences have begun responding to this quirky show that didn’t quite fit in at a standard comedy club, and are building back up. “A lot of comedians are coming back, as well,” says Reber. “It’s a really great stage to come out and work on material you’re writing in a very different venue.” The show is meant to be outlandish, to be oddball — the kind of comedy you wouldn’t be able to see on any other stage in the city. “It’s a gatekeeper show, because it’s the first open-mic a lot of guys ever do. We also play a lot of games and weird stuff from the stage to keep it light and fun for the comics who are doing a lot of open-mics around town … just to keep it fresh.”

It wasn’t always clear the show was going to survive when it left the Laughing Derby, but due to Reber’s resolve and the comedy scene banding together, they found a new home that would not only keep this little gem alive, but also allow it to flourish.

Hosts Reber and Carney are charming and goofy, with a stage presence that walks a fine line between hipster cool and geeky. “Honestly, Kent and I just do stuff we think is going to be funny to us,” says Reber. “Hopefully everyone else comes along with us, but I think the nature of the show is that you can’t over-think it.”

They never charge for the show, and Reber says you never know which of Louisville’s best (and inevitably, perhaps worst) might show up to take a stab at some new material. “Mark (Parris) is always down for a game when he’s here — that’s how he writes some new material. Raanan Hershberg comes here to discover new ways to tell audiences to ‘fuck off.’ And Jacob Williams comes through when he’s in town … I guess he’s a name.”