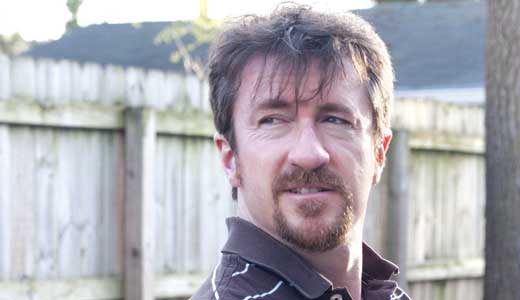 The poem is printed on a single sheet. The paper is thick and the letters are set noticeably deeper than the page’s surface. The bottom half is taken up mostly by an illustration of a tree with a single bird’s nest in it, imagery from the Graham Foust piece above.

“A broadside is a poem that’s printed on a single piece of paper that’s meant to be framed … They’re pieces of art as well as poems,” says Sean Patrick Hill, founder of Green Fuse Press.

Green Fuse is in its infancy; it has only published one work, the aforementioned Foust poem. But Hill has a very specific direction in which he wants his new operation to go.

It is exclusively a broadside printing press. It will only print broadsides of poems, and in limited runs to boot. Only 70 copies of the maiden verse by Foust exist, and they’re being sold at $20 apiece.

He has several reasons for tackling such a project, none of which involve striking gold. “I’m never going to make money off of this,” says Hill. “And that’s not the point … If there’s extra money being generated, what could I do with that? It’s really about investing in something new, something cool.”

In a world where making work for very little to no pay is a cruel reality to most poets, Hill wants to make sure the writers he prints know he supports them.

“When you’re a poet, most places that publish, whether they be small journals or even books in some cases, don’t pay,” says Hill. “One of the main stipulations is … that I’m going to take some of the money, and I’m going to pay the poet as well.”

Like many Louisville creatives, Hill hopes this can help elevate the national perception of the city’s artistic community.

“Louisville has a lot of stuff going on, as far as what you would consider to be a national poetry scene,” Hill says. “What I’m trying to do, also, is that I’m contributing something nationally, in the national literary scene in this country, but it’s housed here in Louisville.”

This was a big reason behind choosing a nationally recognized poet like Foust for the first broadside Green Fuse produced. He wants to first use some bigger names to build somewhat of a reputation before enlisting the work of Louisville-based writers.

Hill wants to make sure the broadsides immediately prove their worth to whoever picks one up. “Hopefully people see this is worth 20 bucks — four coffees,” he says. This, along with maintaining a distinctly Louisville feel, are some of the main reasons why he chose Hound Dog Press on East Market Street to do his printing.

Nick Baute, one of Hound Dog’s owners and operators, is Hill’s partner in creation with Green Fuse. The broadsides are printed by hand on a 1950s Vandercook press, the second-youngest at Hound Dog. Baute’s presses date back to the late 19th century.

In addition to producing the pages for the poems, Baute makes the visual art on the broadsides. “You know, it’s always tough with poetry. I don’t want to take away from the words,” Baute explains. “So when it comes to visual elements, I try to keep it simple to not distract anyone from the importance of the piece.”

It’s a partnership that, for the foreseeable future, will remain intact.

“As long as he wants to keep continuing with it, we’ll keep printing for him,” Baute says.

In order to drum up both short-term and long-term interest in the project, Hill is hosting a release party tonight at Decca. The party will feature readings from local poets including Kiki Petrosino, Adam Day and Makalani Bandele.

Hill hopes the party will sell a few dozen copies of the broadside and make enough money to secure the ability to produce a second one.

“I’m not saying this is a big deal,” Hill says, “but I would hope they increase in value and someday someone could say, ‘Hey, Graham Faust won the Nobel Prize, and look what I got: a signed, singular, no-one-else-has-got-it broadside.’”

For more info on Green Fuse Press or to obtain a broadside, check out greenfusepress.org.