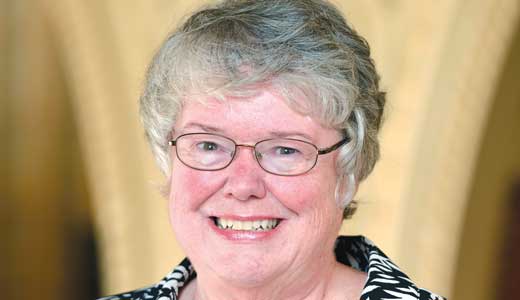 When she was a student at Indiana University in Bloomington, Karen Mann longed to be a writer. An English literature major, she loved books and the written word, but never quite summoned the courage to take a creative writing course. And yet she continued to dream what seemed to her the impossible dream, finally enrolling years later in the late 1980s in a class taught by bestselling novelist Sena Jeter Naslund at the University of Louisville.

“I just didn’t have any confidence,” Mann says now with a laugh. “I was absolutely terrible at the beginning. I wrote poetry and it rhymed, and it was about the seasons … and love — everything that could be bad about a poem.”

But her writing improved, and nearly 30 years later, Mann’s first novel, “The Woman of La Mancha,” a moving romantic epic that serves as a companion to Cervantes’ classic “Don Quixote,” has just been published. The novel is a product of years spent serving her craft, researching and writing draft after draft, but also supporting other writers.

For nearly 14 years, Mann has served as administrative director of Spalding University’s low-residency Master of Fine Arts in Writing program, which she helped found with Naslund in 2000. Ranked as one of the top such programs in the nation, Spalding has produced a distinguished stable of award-winning writers Mann helped shepherd through the program.

Instead of being draining, Mann says her job at Spalding has energized her own writing life. “I’ve completed six book manuscripts. Only two of them have been published, but that’s quite a few pages over time.”

One of those books was “The Woman of La Mancha,” which tells the story of Luscinda, a farm girl who is only briefly referenced in “Don Quixote.” Using those few lines as inspiration, Mann crafted a back story set in medieval Spain, which begins with the character as an 11-year-old girl waking up in a cart with no memory of who she is. As she comes of age, Luscinda learns to question her place in the world and encounters a young nobleman who falls in love with her and begins his own awakening.

Mann began the novel in 1998 after seeing the national tour of the beloved musical “The Man of La Mancha” starring Robert Goulet. In an email to a friend, she mentioned having seen the show and her love of Naslund’s novel “Ahab’s Wife,” a companion to “Moby Dick.”

“When he wrote back, he said, ‘Why don’t you write the companion book to ‘Don Quixote’?’” she recalls. “That gave me the idea, but it scared me to death, and I felt I couldn’t possibly do that. I mean, it took place in Spain; it’s a whole other language, it’s a different country. But while it scared me, it also challenged me, so I decided to start the research.”

Mann confesses to an aversion to travel, so in lieu of touring Spain, she spent long hours in the libraries of IU and U of L, poring over manuscripts to immerse herself in what the young Luscinda might have eaten, worn and encountered in a society in which women and children were considered property. What she realized saddened her. “I felt that, in some ways, women hadn’t really advanced very much in 400 years. Even if you consider the advances we’ve made, we still have a ways to go.”

She further explores the relationship between the sexes in “The Saved Man,” an e-book set in the first century A.D. that was also released in May. The novel is the first in a series in which four immortal men follow the souls of the women they love when the women die.

With the release of her two books so close together, Mann is getting used to her own writing being front and center. “So much of it has just been a surprise to me,” she says, “like people saying to me, ‘I can’t wait to read your book.’ That was a total surprise to me that people would say that. It’s exciting, and it feels like completion, like a full circle.”