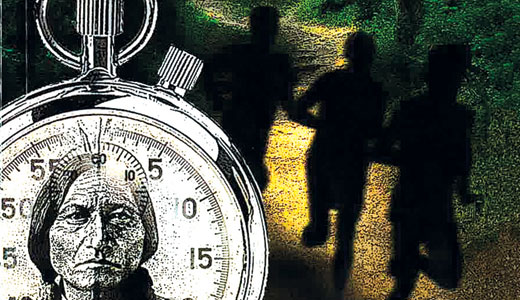 My uncle is a coach. He works at a small liberal arts college where he has spent decades training soccer players to score goals and baseball players to hit home-runs. Yes, these are obvious descriptions, because I am not sporty stock and, frankly, don’t know what he does. But I do know he has quite a temper if you happen to win at a game against him, and he was pleased the one time I bicycled 100 miles along Montauk Highway.

What does that have to do with “Sitting Bull Run” by Pat J. Daly? For me, quite a bit. At first, through the nostalgic feel of the book, I was an outsider. Not growing up a boy, sporty or Catholic, the first handful of chapters had me feeling like the wrong demographic. But I pulled at personal memories — i.e., the set-on-winning uncle and the bike ride along the ocean — to involve myself. After a stack of pages, my head game was rewarded. An interweaving of secrets and crime is the real story of “Sitting Bull Run,” a bent absent from the cover art, title or description.

Set in a tight community on Long Island in the early 1970s, the book tells the story of a male high-school cross-country team, power-wielding Catholic priests, and how world politics (in this case the Vietnam War) seethed its poison into towns intent on keeping the world out. The action follows three teenagers: Dennis, William and Peter. Labeled “the three little pigs” by a less than charming character, the runners are hoping athletics will ensure success beyond their childhood homes. That is until something happens — something ugly — and a crime novel begins to take over the pages of what started with the tone of an affectionate memory.

This shift isn’t the only confusion. The book is framed as the first of the Jack Hogan series, named after the running coach in the story. Yet Hogan’s role in “Sitting Bull Run” is not center stage. Maybe, as the series continues, Hogan will rise in prominence, but if this is the case, a glimpse into the next Jack Hogan book at the end of “Sitting Bull Run” could have maintained suspense for upcoming publications.

If you grew up as a distance runner, or in a Catholic family on Long Island, connections will be made as soon as you pick up “Sitting Bull Run.” Or, if you are looking to add to your communal shelf of reads at the summer cottage, I can imagine taking in “Sitting Bull Run” while lounging on a porch swing, waiting for family and friends to return from the beach.

And if you’ve read this far and are wondering why someone who isn’t athletic would take a long ride along Montauk Highway, rest assured, it was not my athletic prowess; I did it as part of a ridiculous romantic pursuit. What can I say? I like to hang in until I get the whole story.