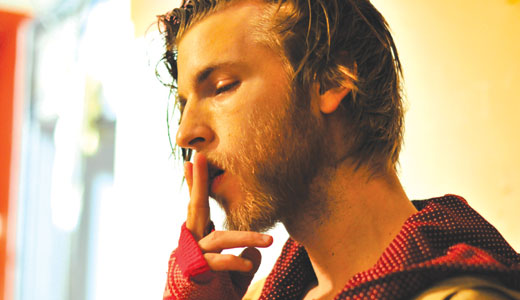 Andrew Sellers is a man of many names. His current nom de song is Andrew Rinehart, though that is certain to change with his ever-metamorphosing musical style. After starting his music career in a hardcore band, the Louisville native has made a 180-degree turn to playing folk music.

His current project, Everything, is coming in three parts, the first currently out and the second coming in August. In celebration of this trilogy, he’s playing release shows in his two most recent homes, L.A. and New York, as well as one Friday at Haymarket Whiskey Bar.

LEO: Are you doing anything special for the Louisville show?

Andrew Sellers: I don’t play a ton, so I put a lot of thought into curating the show — like, “Where is it?” and “Who’s likely to be there?” I do think about what would make a good show for the context … It’ll be more acoustic; folky music is in the water there.

LEO: What’s different about playing in New York or L.A.?

AS: People in New York regard country as super kitschy. In New York, everyone’s super into DJs … In California, they’re really into Brits; they just fucking worship that shit. Anything obscure and British, they’re jerking off to that shit.

LEO: You’ve changed up your music from project to project. What do you think you’ll do next?

AS: I’m kind of bored playing acoustic. I grew up playing borderline-metal shit, and we all pretty much lost interest in that. After being in New York so long and being in Splash — it’s like they were all good at drum machines and synths. It’s so fucking easy; you can just take it in your backpack in New York.

LEO: How often do you come back to Louisville to perform or otherwise?

AS: I try to get back as much as I can. My family and parents are there, and I have lots of old friends there. I’ve been in New York the last three years and recently moved to L.A., but I get back at least two to three times a year … I make up reasons to come back.