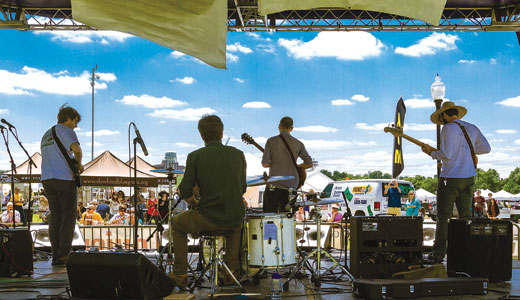 If you invite JohnBen Lacy now to a party in 2020, he might get there. The songwriter, vocalist and guitarist for the Louisville indie rock band Bookshelf, now 29 years old, still used a flip phone until last year. Bookshelf began in 2012; it’s Lacy’s first band.

What took so long? “I don’t know, man. It’s just a matter of figuring things out — determining what I find creative joy in, and being honest about what I am able to do and making it a reality … I guess I’ve just been slow in figuring out my process.”

Neat and organized, having collected several years worth of writings, drawings and other ideas in an oversized notebook, Lacy found his confidence and sense of adventure. At 27, when some rock stars die, he was finally ready to jump into the band world. He asked old friend and fellow Atherton grad Chris Martin, a drummer, to play with him; they added guitarist Drew Bagby, who Lacy knew from Centre College, and Bagby suggested his friend Tommy Arnspiger for bass.

Also a filmmaker, Lacy writes the core of the songs, but then sees them grow and change form as the others add their performances. “Starting from what I put into it, it doesn’t come out the same thing. I think of it like a computer that receives an input, and then something happens in between, and then there’s an output that’s nothing I could create on my own.”

Their first EP, Stranger to Be, was released earlier this year. Lacy and his bandmates all enjoy different strains of music — from indie and experimental to jam bands — which is less obvious in the finished product, so far, but more so in the hour-long “brainjams” that begin each practice.

Relatively new to what can be a very self-contained scene, Bookshelf has made friends, hopping on to shows and even the occasional festival. “We haven’t had any horror stories yet … So far, so good,” Lacy says.