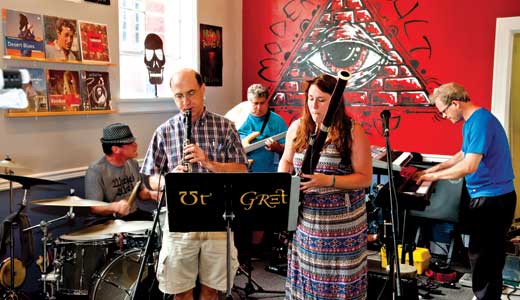 Conroy credits Roberts, saying, “He has connections that defy description. There’s no interest in the States for the kind of music we do, it’s a more esoteric thing, but the Italians love us, and it turns out that the Belgians and the Brazilians and the Portuguese love us. The album’s getting unbelievable press overseas, where this music is taken seriously.” This comes without having played in Europe, although Conroy dreams of a “Sister Cities Tour.”

When Ut Gret moved here from Santa Cruz, Calif., their first gig was at Tewligan’s, where they performed Terry Riley’s “In C.” “That was a signal that we were going to do compositions,” Conroy says. “Roberts is a great composer … showing up with every part of the composition extremely detailed and mapped out. I’m more like, ‘We’re going to do this, then this, and now we’re going to figure out how we’re getting from Section A to Section B.’ He’s writing melodies and rhythms that he has in his head; I’m writing things I hear people doing when we improvise — ‘You like to do this, so let’s do this some more.’ I’m writing with the personnel of the band in mind.”

Conroy continues, “Our music is complicated. There are times when we’re playing in different time signatures. Multi-ethnic has always been part of our MO. I wanted to make sure that the whole world was open to us.”

With influences as varied as King Crimson, klezmer, gamelan, Zappa and jazz, it still comes out Ut Gret. “As long as the musicians can see the vision, it’s going to be us. We’re not trying to be revivalists, but we are certainly standing on the shoulders of giants. If you’re not, you’re not seeing very far.”

For more on Ut Gret, check out utgret.net.