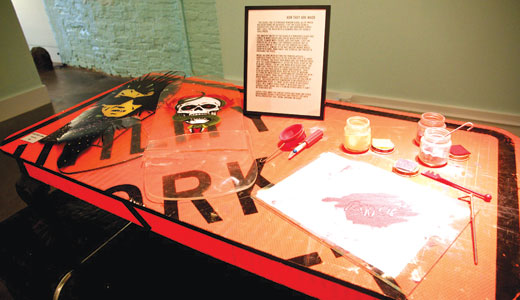 Chris Chappell is an artist whose new exhibition, “Glassics,” marries his glassmaking day job with the skateboarding culture in which he grew up. You may already know Chappell’s work around town, including the mural on the side of Dragon King’s Daughter in the Highlands. If not, his new exhibition at Revelry Gallery is the perfect chance to introduce yourself to the work of this hometown painter. Skateboard photography by Matthew Hirsch accompanies Chappell’s exhibit.

LEO: Your show is titled “Glassics.” What is “classic” to you?
Chris Chappell: In this case, it happens to be some of the first images I remember seeing as a child in the ’80s, which weren’t necessarily the most popular things at that time but things that were in my household and neighborhood. I didn’t come up with the title of the show. I posted a contest for someone else to name the show, and my dad suggested this, and people agreed, so I thought it was rad that my dad titled it. The whole show came from talking to others; I can’t take full credit for it.

LEO: How did you come to the decision to present your work as skateboard decks? Does this presentation, as opposed to a normal canvas, affect your work?
CC: People have been painting on wood decks for decades, and there are always skateboard art shows — it is a canvas of its own. I just happened to start working around glass eight years ago and thought it would be cool to try to make a deck in glass. I like trying things I haven’t seen before. It doesn’t affect the work: It’s just a different process. Creating is creating, and there are always problems to solve, which is one of my favorite parts.

LEO: How do you think Louisville has informed your art and this series?
CC: I’ve been here for 36 years, never left, and I’m quite all right with that. I love Louisville. I really don’t need more than this, but couldn’t do less, either. I’ve traveled to big cities and I get it, I think. But, yeah, it’s unique, well balanced. We have at least one of everything in the world, and it’s helped form who I am today, and I wouldn’t want to be from anywhere else.

LEO: Could you explain the trajectory of your career, being self-taught and all?
CC: I got a good scholarship to a good art school but still couldn’t afford it, so I opted for community college and almost graduated. I just skated, mostly, not doing much art, but became influenced by all the art that was in street/skate/hip-hop cultures and saw that there were artists doing it and making it, so I got back into it and am still trying to figure it out. It’s a tough problem to solve, but that’s what I like, right?

LEO: Could you talk about Matthew Hirsch and how his work adheres to the ethos of your show?
CC: I just met Matt and it was (Revelry owner) Mo (McKnight Howe)’s idea to have him show in the opposite room. She sent me a photo, and I was, like, “Yes!” It was skate, mine was skate, it more than worked. The work is great, and if you don’t know anything about Louisville’s skate-park community and people, just look at his photos.