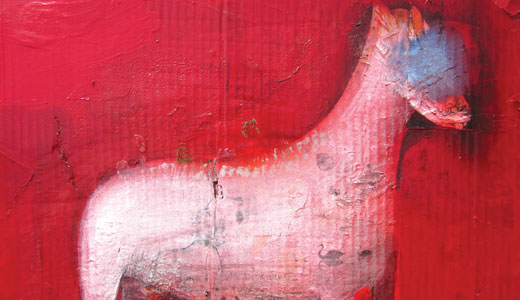 While America has been deemed a melting pot, some of us concoct a whole new stew for the world in which we reside. Andrew Abbott lives in a “world soup.” He’s an artist who is truly a global citizen. After spending some time talking with Abbott about his new exhibit at Garner Narrative, I can’t quite figure out if I’m most impressed by his plentiful travels, his fanciful art or his expertly cultivated laidback air.

Abbott hopes art enthusiasts are transformed by his unusual paintings. “Life is a strange process,” he says. “I’ve gotten the inclination that painting is my thing, but I still do lawns a few times a week.”

Angie Garner, whose mother Joyce is the gallery owner, was struck by Abbott’s honesty in his work. “He paints about what it’s like to be human and has an amazing repertoire for the messy parts,” she says. “It’s tough to make work that involves a high level of personal exposure, especially as an artist’s audience grows and the stakes get higher.”

Abbott’s artwork is not done justice by the written word. I’ve spent quite some time viewing his pieces in hopes of coming up with an appropriate description. They’re modern, hypnotic, strange, full of depth and unexpected.

He’s not quite sure where his inspiration comes from at times, so he turns to the tools he’s using. “I look into the painting to influence me — it’s like a puddle of paint, and I just move it around and it becomes something. I build on those ideas.”

While there are 15 of his pieces on display at Garner Narrative, he is currently working on more than 100 at his living room studio. His collection is even more expansive — he’s currently exhibiting work in Miami, Chicago and Germany.

His travels have taken him around of the world — from Nova Scotia to Puerto Rico — and he says he loves being exposed to art of different countries. “I think the whole world is so beautiful — others’ art, the inspiration comes from everywhere, the influence comes from everything.”

The title of his show, “i live in a world of soup,” was inspired by a Facebook post about how grateful he felt to be alive. “I’m trying to have the perspective that the whole word is your yard, the whole world is there for you,” he says. “But I realize it’s not always so easy to tap into its accessibility. So I keep trying to be, because I’d like to do amazing things.”

Abbott would like to be in every home, and with the help of the Internet, he feels like he is there. “What a whimsical world we live in to be connected to the whole world from your pocket.”