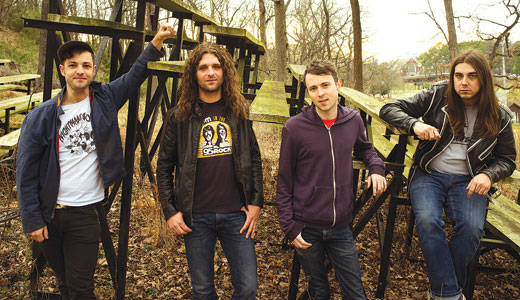 Lee Bains III & the Glory Fires’ label, Sub Pop Records, touts them as a party band. But this is one party band that can appeal to the head as well as the feet. “I have always been drawn to music that can be intellectual and visceral at the same time. That’s what I strive for,” says singer/guitarist Bains. “I think rock ’n’ roll that, as a form, has power and a fast beat and a loud guitar, and thoughtful lyrics, are not at odds. They can support one another and sharpen each other.”

Bains started forming that notion after discovering the literate punk of Hot Water Music, Against Me! and Avail growing up. As lyricist and chief songwriter, Bains shows he is an articulate, thoughtful writer who also just happens to like to rock really hard. On the band’s newly released second album, Dereconstructed, several songs (including “The Kudzu and the Concrete” and “Mississippi Bottomland”) deal with Bains’ roots in the South (he grew up in Birmingham), examining its culture, the characteristics that make the South unique and how this plays into the values and ideals Bains is developing as he grows further into adulthood and seeks to gain a greater understanding of himself.

“This album is definitely toying, or at least trying to, with the notion of Southerness and identity,” Bains says. “I have found my perspective and my experience, no matter how much I’ve wished it wasn’t at different times in my life, is a Southern one. I am a product of my place in some regard, as I think we all are … I think, if anything, this is just my attempt to confront and reconcile myself to my cultural inheritance.”

There’s also a topical element, as Bains looks at corporate greed and corruption (“Company Man”), the homogenization of communities in pursuit of profit (“What’s Good and Gone”) and blind allegiance (“Flags”).

Some of the songs were written during the time of the Arab Spring and the Occupy movement in the United States and were inspired by these actions. “I was really … experiencing a sense of anger, but also excitement and hope, to some degree,” he says.

Dereconstructed is considerably harder rocking than There is a Bomb in Gilead, their 2012 debut. Bains feels the outspoken content of some of his lyrics played a part in this musical shift. “I think there were a few (factors),” he says. “I think playing so much, the songs had started to become faster and more intense, the songs from the last album. And those were the songs we all most enjoyed playing and I thought felt most natural. So that was part of it. But on the other side, there were, I guess, issues I was considering when writing this album that just inspired more of that type of sentiment in me. I felt like there was more aggression behind the songs than there was on the first album.”

Dereconstructed was also influenced by the evolution of the Glory Fires lineup. Bains formed the group after a stint in the Alabama-based band the Dexateens. But about a year ago, the Glory Fires went through a significant lineup change, with new guitarist Eric Wallace and new bassist Adam Williamson joining Bains and drummer Blake Williamson (Adam’s brother).

“I think as a result of touring so much, Blake and I have definitely established more of a musical rapport, I guess, and I think also gradually ratcheted up the intensity of our shows,” Bains says. “Then, bringing Adam and Eric into the band pushed that up a lot more, just because they’re really great players as well as energetic presences.”

Liking the harder-hitting sound of the new lineup, the group wanted to capture that raw, full-throttle sound on Dereconstructed. There’s a little Southern twang, plenty of garage punk-ish aggression and a good deal of melody in the songs, which makes Dereconstructed an enervating, in-your-face and, most of all, fun experience. The power and personality of the band’s music means that even though there’s intelligence to the band’s songs, a Glory Fires concert is hardly an intellectual exercise.

“We play rock ’n’ roll music and our shows are — well, we definitely have fun at our shows,” Bains says. “There’s definitely a wildness to it. It’s not a cerebral experience, going to one of our shows.”