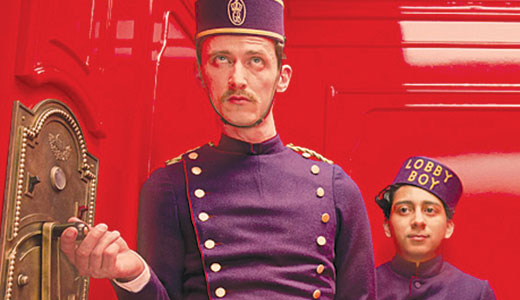 Many people consider writer/director Wes Anderson (“Moonrise Kingdom”) a genius. We won’t go that far, but he does make some damn clever and surprising movies. Case in point: this entertaining/weird mix of romance, adventure, murder, slapstick, daring prison escapes and war starring F. Murray Abraham as the former lobby boy of a European hotel, reminiscing about boss Ralph Fiennes and their many misadventures. But the true joy here is Anderson’s breathtaking creativity. Just relax and check in with fellow travelers Tony Revolori, Tilda Swinton, Jude Law, Adrien Brody, Saoirse Ronan and a host of others. Wonderful.

In a world of Legos where “everything is awesome,” a “perfectly average” Lego man, voiced by Chris Pratt and dedicated to uniformity, finds himself declared “extraordinary” and is thus thrust into a quest to save the Lego universe. The expensive voice talent gets lost amid the breathtaking animation, hilarious puns and painfully cheap humor, all of which builds to a fever pitch until halted by a brief live-action segment that sets you up for an off-the-rails finale. We’re embarrassed at how much we enjoyed this movie. A must-own.

Alexander the Great, arguably the most resourceful and charismatic leader in human history, unified nearly all of the known world some 2,300 years ago while still a very young man. But how much of his legend is true and how much did he and others invent to assist his quest? This jaw-dropping six-part BBC exploration takes us on a journey across the ancient world, stopping in Asia and present-day Afghanistan to find the reality of the man — some of which is even more amazing than the myth. Riveting, exciting and even inspiring.

Detective Chief Investigator Alan Banks (Stephen Tompkinson) is an absolutely ruthless and cunning policeman, willing to go to any lengths to solve the most horrendous crimes imaginable. Under his charge, D.S. Annie Cabbot (Andrea Lowe) finds herself knee-deep in arson, murder, blood and decades-old mystery in an impressive — and extremely graphic — cop show from the masters at the BBC. And rather than make another weekly series of simpleminded mystery shorts, the creators go deep, focusing the entire season on the many tentacles of a single four-plus-hour case. Shocking and intense, this thing rawks; highly recommended.

INVASION OF THE SCREAM QUEENS

The 20th Anniversary Edition of a guilty pleasure of ours. Director Donald “Demon Queen” Farmer introduces us to a bevy of legendary cult actresses including Michelle “Hollywood Chainsaw Hookers” Bauer, Brinke “Sorority Babes in the Slimeball Bowl-O-Rama” Stevens and Mary “Eating Raoul” Woronov, along with great behind-the-scenes pieces on “I Spit on Your Grave,” “Slumber Party Massacre” and many others. A required component of any good cult-movie collection.

Ken Kirzinger (Jason from “Freddy vs. Jason”) returns from the original “Joy Ride” to reprise the role of Rusty Nail, the truck-drivin’ anti-hero/psycho out to punish those who bruise his strict moral code. This time he targets a group of street-racing goons who get squashed in inventive ways. Unfortunately the innocent get no better treatment than the guilty (a theme of the series), putting blonde cutie Kirsten Prout (“Kyle XY”) in harm’s way — chained to the front of his 18-wheeler!

This low-budget South Korean drama is surprisingly good — and with nary a Kung Fu kick nor bloody shoot-out in sight. On the surface, it’s the tale of a struggling, likeable young tax attorney who agrees to represent a friend in court. But you realize as the movie progresses that this decision is a metaphor for SK’s cultural changes — some might say devastation — of the past 20 years, leaving the current generation of young professionals conflicted as to who they are and how they should proceed. Universal in its appeal.

This British-made sci-fier is excellent. In the near future, a pair of researchers are completing development of the world’s first truly autonomous artificial intelligence, called “Ava” (played by Caity Lotz, Black Canary of TV’s “Arrow”). Once housed in a nearly impregnable robot body, their employers, the Ministry of Defense, swoop in and start a brutal training regimen to turn her into a merciless killing machine. The childlike Ava cannot resist, so the scientists band together to save their creation and mankind’s future in the process.

THE RISE OF THE NAZI PARTY

We’ve often wondered how Hitler — a whiny, low-level academe — could mastermind the greatest criminal conspiracy in human history. Well, now we know, and you can, too, by watching this 10-part doc on how a handful of ideological thugs slyly manipulated German culture in ways that America’s current Republican Party seems to have studied very well. Bottom line: Money is the root of all evil; people are hard-wired for prejudice; and a sense of entitlement can spark many flames. One more truism: To have a future, you must learn from the past. Watch this.

Elizabeth Banks is at her sexy, comic best here as a would-be news anchor who goes on a drunken bender after flubbing the audition. Problem is, when she wakes up the next morning, she doesn’t know where she is, who she’s in bed with, or what she did the night before. Oh, and her agent has left her a message saying she got the job — provided she can get her drunken butt to the office ASAP! The rest of the film is a sexy, racy gigglefest as she uncovers her previous night’s entanglements at the worst possible moments. With James Marsden, Gillian “Community” Jacobs and Seneca High grad Sarah “21 & Over” Wright.

Mark Webber of “Scott Pilgrim vs. the World” leads this low-rent horror remake of the Thai flick “13: Game of Death” about a quiet man with a good life who gets a phone call telling him he can win millions of dollars by performing a series of ever-escalating tasks. The first? Swat a fly. But the danger ratchets up quickly until it threatens fiancée Rutina Wesley (“True Blood”) and draws the attention of cop Ron “Hellboy” Perlman.

ADJUST YOUR TRACKING: THE UNTOLD STORY OF THE VHS COLLECTOR

This is an unrepentant, fun, kinda goofy doc on that world-changing invention: the VHS tape, and the insane fans determined to keep the format alive. In many ways, this stubbornness mirrors the resurrection of the vinyl LP for music, except that VHS tapes, by design, are inherently fragile, rotting away despite the best of intentions. But to the rabid – some might say “pathetic” – fans of the medium, this just makes them all the more precious.

More low-budget shocks from our friends at Midnight Releasing. This one finds a pair of likeable young professionals buying a weekend getaway place … next to the rotting remains of a boarding school, the site of a gory massacre years earlier. You just know this isn’t going to end well, don’t you? The china-doll-like title character is a brilliantly conceived and beautifully stylish nightmare that’s worth the price of admission.

A very personal doc on the rise of openly LGBT elected officials throughout America, each telling their own tale in their own way from their unique perspective, with minimal use of news- footage. There’s little if any discussion of politics (in the dirtiest sense of that word); keeping the focus squarely on the individual’s personal struggle and how it might apply to the viewer’s own experience.

Another great BBC cop series, this one more comic in nature thanks to its fish-out-of-water premise. Scotland Yard DI Richard Poole (Ben Miller, “Primeval”) is sent to a Caribbean island to help solve the murder of a cop. Problem is, he doesn’t like seafood. And can’t stand the heat. Or the sun. Or the music. Or the sand, the surf or the insects. But his Brit-bound boss likes him right where he is, so he’s stuck there, investigating ever more complex and gruesome murders with the help of fellow officers Sara Martins (“Tell No One”) and Danny John-Jules – Cat from “Red Dwarf.”

For the sadly uninformed, James Thurber was America’s greatest “god-damn humorist” and cartoonist. Most famous for writing “The Secret Life of Walter Mitty,” he also coined our own personal mantra: “Early to rise and early to bed makes a man healthy, wealthy and dead.” This doc, perfectly narrated by George Plimpton, looks at his life with all the usual talking heads – comedians and the greats of modern American literature – but is most entertaining when told through Thurber’s written words. Recommended.

Sinbad has always impressed us by his ability to make us laugh while keeping things clean. But for the past few years, he’s been absent from the stage, happily ensconced in the studio doing voiceover work, largely in children’s films, so this return to standup in his Detroit hometown is quite a treat. He’s older, wiser, balder, a bit more aggressive and visibly angry at all the talentless hacks who put their names on overpriced crap aimed at inner-city kids. The guy’s still got it.

Wow! Six well-chosen flicks from butt-kickin’ Kung Fu babe and classic beauty Angela Mao Ying! While best known for her portrayal of Su Lin in Bruce Lee’s “Enter The Dragon,” here we get to see many sides of this versatile vixen, from 1973’s “When Tae Kwan Do Strikes” and “The Tournament” (reportedly made from “Dragon” out-takes), through 1976’s “A Queen’s Ransom” (aka “International Assassin” with Yu Wang and George “007” Lazenby). Watch for such greats as Sammo Hung Kam-Bo, Yuen Biao and the underrated Carter Huang from “Big Trouble In Little China.” A steal at this price.

TOP HAT & TALES: HAROLD ROSS AND THE MAKING OF THE NEW YORKER

Love it or hate it, The New Yorker is as American as a publication can get. And given that publications are an endangered species today, it’s a joy to watch the backstage magic that goes into each issue of this iconic almost-weekly magazine. Stanly Tucci narrates its evolution, born in the ritzy glamour of 1925, showing the many ways in which it has held on to the style of that day while growing to produce cutting-edge analysis, trenchant commentary and those trademark cartoons. This is how you make a doc.

A two-disc, 21-episode collection from Comedy Central’s “Tosh.0,” plus a couple of special features, the best of which is his entire, uncut, now-legendary 45-minute rant on the 2003 dwarfism movie “Tiptoes,” starring Matthew McConaughey, Gary Oldman and Kate Beckinsale. In many ways, this may be Daniel Tosh’s finest hour.