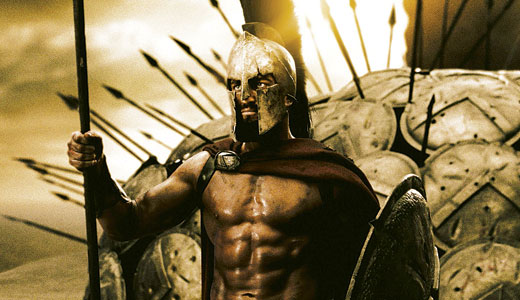 While this lacks the impact of 2006’s “300” — partly because director Noam Murro simply doesn’t have original writer/director Zack Snyder’s supernatural talent — it makes up for it by having one of the best screen villains we’ve ever seen: the incomparable Eva Green. She plays Artemisia, ruthless commander of the Persian Navy who can wield a blade, a bow, her razor tongue or those voluptuous hooters (which are displayed prominently in a brief nude scene) as required to bring any man to his knees. There are worse fates. Lots of bloody sea-farin’ fun.

Something of a flawed masterpiece, this romantic fantasy stars Colin Farrell as a would-be robber who discovers “Downton Abbey”’s Jessica Brown Findlay dying — and he may have the power to save her, even from death. In lesser hands, this would have never made it to the screen, but screenwriter Akiva “Fringe” Goldsman does a great job, with the resulting fantasy/adventure mixing destiny and the eternal struggle of good vs. evil in surprising ways with help from Russell Crowe, William Hurt and Jennifer Connelly. If only he hadn’t directed … still, worth your time.

A somewhat experimental and very surprising drama that swirls in documentary elements to tell insightful tales of LGBT life in heartland America. Cat Smits plays a documentary filmmaker from Amsterdam who travels to the small town birthplace of her late gay friend, looking for insights into his suicide, but discovering more about herself than she expected. Proof that films can entertain, inform and move audiences without zillion-dollar budgets.

A poorly named five-disc collection of exceptional British costume dramas and comedies, including those based on works by Jane Austen, Charlotte Brontë and Elizabeth Bowen. Our favorite is “The Lady’s Not For Burning,” which finds worn-out scoundrel Kenneth Branagh meeting cute Cherie “Secret Diary of a Call Girl” Lunghi while awaiting their executions. Others star Kate Beckinsale, Samantha Morton, Ciarán Hinds (“Game of Thrones”), Andrew Lincoln (“The Walking Dead”) and Miranda Richardson. Five great tales at a great price.

Is the process of hydraulic fracturing, upon which America has based its economic future, safe as proponents claim, or is it an ecological disaster of biblical proportions, hiding beneath our feet, waiting to kill us all? This doc looks into the science, the political spin and troubling ecological events across the U.S. and Europe to uncover the “real” truth. Too often sides with the pro-frack lobby, but even if you buy the industry’s arguments, this whole thing is scary. As. Shit.

I SPY: THE COMPLETE SERIES

The year was 1965: Pink Floyd first performed, St. Louis’ Gateway Arch was completed and Robert Culp and Bill Cosby took the James Bond craze to America’s TVs, completely ignoring the fact that one was white and the other black at a time when separate-race bathrooms and water fountains were common. And it was one helluva good action-adventure show! With hot babes, sinister plots, fast humor and a constant air of danger as the two travel the globe undercover as a pro tennis bum and his trainer. One of the best damn TV shows ever made and a slice of history, now available in a complete 18-disc boxed set; 82 must-own episodes.

This excellent British private-eye show continues to soar for two reasons: First, the breathtaking landscapes of western Ireland, and second, Jack Taylor (Iain Glen, “Game of Thrones”), as mule-headed and ornery a drunken ex-cop as ever brawled his way out of a pub. But Jack is the perfect man to wrestle the truth from the rugged crags of Galway. In this set, he must deal with his mother’s stroke, a beheaded and possibly pedophilic priest, and a tough-as-nails 11-year-old Traveler who may have witnessed her mother’s murder. Beauty, intrigue, fisticuffs, humanity, romance, humor and the best of the Ol’ Sod in equal measure. Highly recommended.

Based on the real-life tale of an NYC couple who repeatedly robbed mafia “male social clubs” with impunity until they got greedy and became targets of both the Mob and the FBI. Michael “Seven Psychopaths” Pitt and Nina “Tower Heist” Arianda are suitably funny, attractive, sexy, dangerous and smart as the leads, with Gumba-greats Andy Garcia, Ray Romano and Burt Young as their targets. With the always welcome Griffin Dunne, who rotted away so nicely in “An American Werewolf in London” (1981).

THE CHEF, THE ACTOR AND THE SCOUNDREL

The supposedly true damn weird tale from 1942 China about the Japanese, testing a biowarfare agent on a Chinese city, causing an outbreak of cholera that decimates even their own troops. The doomed Chinese cannot find a vaccine that works until a Japanese general and biochemist are tricked by a scoundrel into thinking they’ve been captured, then taken to a local restaurant where an opera actor lives. There they stage an impromptu opera meant to confuse the two into revealing the vaccine and save the city! Weird, funny, shocking and entertaining.

Crazy serial-killing pig-hunter Mick Taylor (John Jarratt) returns in this follow-up to the surprise Australian hack-’em-up hit from 2005. This time it is Ryan “Underbelly” Corr’s turn to visit Australia’s Wolf Creek Crater and wind up in Mick’s underground hole of horrors. Luckily he’s brought lovely-eyed TV actress Shannon Ashlyn along to share her skinny-dipping tips and test out the sleeping bags.

Dominic Purcell from “Prison Break” is one of the most bankable action stars around, proving it in this otherwise run-of-the-mill boxing drama. He’s a washed up boxer who gets a chance at a big comeback with the help of a perfect pair of oldsters, Michael Ironside and James Caan. A better-than-it-had-to-be tale of mastering your personal demons with help from Louis Gossett Jr., Kim Coates and Famke Janssen.

This doc on Anita Hill, who famously accused aspiring Supreme Court Justice Clarence Thomas of sexual harassment, has become something of a cause celebre, once again painting Ms. Hill as a tower of virtue, an innocent victim who bravely stood against a corrupt, male-dominated oligarchy. Yes, she may truly be a martyr, but we’re not convinced. Check it out for yourself before you brand us as chauvinists.

Scott Aukerman (“Between Two Ferns”) and Reggie Watts (“Conan”) created and star in this most unusual “talk show” that isn’t. Yeah, it looks and feels like a talk show, and there are guests and they do talk, but this show is the beating heart of the alt-comedy scene. This season includes a visit by the vastly underrated Andy Richter — whose late, lamented “Andy Richter Controls the Universe” was one of our favorite shows — and too-sexy-for-words Jessica Alba, who takes over the studio to run her own game show. The most unpredictable and inventive show on the tube.

There’s no reason why this hokey low-rent thriller starring TV soapers you probably never heard of should work, but somehow it does. Part of the reason is a script by underrated screenwriter/actor Jenna Mattison, which finds lovers Mark Hapka (“Days of Our Lives”) and Alicia Ziegler (“Rise of the Dinosaurs”) getting snuggly. Then she falls strangely ill. Then she learns of the mysterious disappearance of Mark’s previous girlfriend, and of his weird devotion to his mother, soap great Donna Mills. Silly TV fun.

We’re surprised that Kentucky Senate Republicans haven’t sued Netflix for revealing their secret dirty laundry in this thinly disguised tale of Sen. Mitch McConnell, the Terror from Tuscumbia, Ala. Kevin Spacey plays the powerful majority whip who will do anything to anyone to stay in power, endlessly back-stabbing and dirty-dealing his way toward the presidency with wife Robin Wright by his side. Not that his fellow politicos are any better! To a man they consider their constituency to be cattle. This series scares the living bejeebers out of us, despite the welcome nudity. You’ve been warned.

The fourth season of this “Carol Burnett Show” spin-off focuses more on Vicky Lawrence’s cantankerous Mama character, including a number of tales that look into her secret youthful escapades — stories that she isn’t going to divulge without a fight! Ken Berry returns, as does Dorothy Lyman as her brassy daughter-in-law, to see Mama take up tap dancing, become hooked on the Home Shopping Network, inherit a parrot that may hold the secret to a hidden fortune (one of our faves), appear on “Jeopardy” and visit Hawaii in a two-parter.

MASTERS OF SEX: SEASON ONE

Michael Sheen and Lizzy Caplan star in this wet dream of a cable TV concept: the trials and tribulations of early sex researchers, Dr. William Masters and Virginia Johnson. While the two staidly go about their work, seemingly surprised at the amount of misinformation around them, the audience gets to feast on a bevy of nekkid people, all learning to enjoy the various ways that humans pleasured themselves in the ’50s. We particularly liked the performances of lovely Rose “Tinkerbell” McIver and Caitlin “Gossip Girl” FitzGerald, but the vibratory surprises of Nicholle Tom (little Maggie Sheffield from “The Nanny”) were the best. Enjoy.

While the closest thing that American TV ever had to this distaff PI series may have been “Rizzoli & Isles,” Suranne Jones (“The Sarah Jane Adventures”) and Lesley Sharp (“From Hell”) go in a completely different direction for this popular BBC hit. Far less graphic than most Limey dick-shows, this considers their home life, rendered chaotic by their stressful and unpredictable jobs. One is a mature mom, the other is, frankly, a child in a woman’s body, but together they prove greater than the sum of their parts. Addictive.

One of our favorite underutilized actresses, Rumer Willis, stars with Chris “Weeds” Marquette in this truly brilliant, painful and cathartic road trip through America’s least-traveled byways. She’s a victim of childhood abuse who runs screaming from L.A. He’s a hermit, obviously suffering from an obsessive-compulsive disorder; unable to understand social conventions yet brilliant at detailed tasks. Apart they are lost, but together they just might fit. Indie cinema at its best.

Finally available — including the never-on-video third/final season — this legendary chapter in the Transformers canon. The good guys, Optimus Prime, Bumblebee, Bulkhead, Prowl and Ratchet, stuck on 22nd century Earth, continue to hide the AllSpark from the evil Decepticons and their minions. With David Kaye instead of Peter Cullen as the voice of Optimus Prime, and Bumper Robinson, who played the continuing character of Leon on “Night Court” as a child, as the voice of Bumblebee.