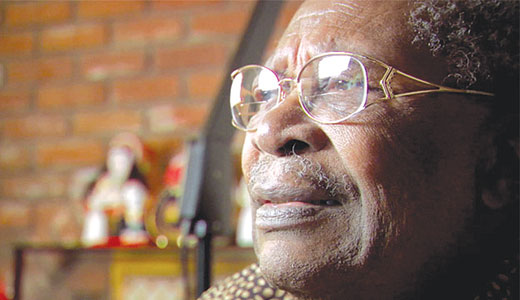 B.B. King: The Life of Riley

B.B. KING: THE LIFE OF RILEY

It’s hard to believe, but no one has ever made a doc before on living blues legend B.B. King. Long overdue and narrated by Morgan Freeman, this fills in the gaps of his early history as a wretched Mississippi cotton picker who crawled out of brutal racism and poverty to embody America’s greatest musical heritage. Lots of wonderful family tales and old-time gospel music mix with blues-tinged comments from Bono, Clapton, Raitt, Dr. John, the Stones and President Obama to flesh out the tale, with B.B. providing the masterful soundtrack. Recommended.

A perfectly chosen 55th Anniversary collection of the best episodes from the best anthology series ever broadcast. No collection — except the Definitive Collection: the entire series on 28 discs for $299.99 — could satisfy every fan, but for a handy two-disc “best of,” you’d be hard-pressed to find a better selection. Includes such greats as Burgess Meredith in “Time Enough at Last,” big Richard Kiel in “To Serve Man,” William Shatner in “Nightmare at 20,000 Feet,” Donna Douglas in “Eye of the Beholder” and over a dozen more from the original Rod Serling series. Indispensable. ’Nuff said.

Daniel “Harry Potter” Radcliffe gives his usual great performance in this dark Limey two-season dramedy series. He’s the fresh-faced medic thrown into the chaos of a creepy middle-of-nowhere hospital populated by loons, many of them with bizarre maladies, just as the Russian Revolution is powering up. Now the cool part: He copes by asking advice from his future self, Jon “Don Draper” Hamm! A simply brilliant bit of insanity; absolutely nothing on the telly to compare it to.

This Tolstoy tale has been filmed almost three dozen times — including at least six times in the silent era — so why watch this ’70s version? Because being a 10-part Australian BBC series gave it the pedigree, resources and talent to do it right. Anna is played by classic beauty Nicola Pagett, with appropriately handsome and hunky Stuart Wilson (Dr. Hatcher from “Hot Fuzz”) as her Vronsky. Arguably the most faithful adaptation ever made, it cheats just enough to keep the budget in line, yet delivers all the heartbreaking, sumptuous delights this tale is known for.

This ridiculously titled horror-thriller (originally “Yellow”) is more Giallo than slice-’em-up as newcomer Margaret Grace seeks a quiet life in the ’burbs. But her job is literally killing her, and her new friend, a female sex-line operator, is becoming increasingly unstable. Then she gets fired. And people around her start dying. A minor no-budget indie to be sure, but you gotta admire the spunk and determination to not make “just another horror movie.”

Wales is a land haunted by time: darkly beautiful, rugged and dangerous, populated by people who are all too familiar with hardship and the fleeting nature of life. Into this land steps police detective Richard Harrington (“Bleak House”), a man with no time for people, particularly those who commit murder and especially those who keep quiet about it. He reluctantly joins forces with Mali Harries from “Doctor Who” to wrest the truth from these hard souls while the strain takes its toll on his mind and body. Another earthy cop hit from the masters at the BBC.

Ian “Pillars of the Earth” McShane is the titular antique dealer/antihero in this dark, dangerous and almost swashbuckling con-game series from the BBC. Frankly, he’s a rogue and he loves it. Whether the game is outfoxing those who would profit from crime, bedding a winsome heiress for information, or helping those who have been cheated, “Lovejoy” is joy — ably assisted by Lady Jane (Phyllis “Downton Abbey” Logan), brain-dead assistant Eric (comic Chris Jury) and inebriated oldster Tinker (Dudley “Cockneys vs. Zombies” Sutton). One of the most popular and entertaining series the BBC ever produced, now available for a reasonable price.

A completely unrepentant “crazed killers on a spree” thriller with the Cast of the Low-Rent Gods: Eric Roberts, Charles Durning and Robert Loggia. OK, those are all cameos: The real star is Robert Bogue from TV’s “Wallflowers” who plays a psychopathic chainsaw-killing judge, doting on his equally crazed girlfriend, scream-queen/Playboy Playmate Rachael Robbins. A guy could do worse. While not a movie for the faint of heart, the two FBI agents are freakin’ hilarious. Worth a look.

This winsome romantic Indian drama is warm, wise and uplifting (everything we hate in a film). It centers on two people, a businessman grieving his recently deceased spouse, and a young wife who feels unappreciated by her busy husband. One day the man receives what he thinks is his usual dismal lunch, only to discover that it is delicious, so much so that he returns a thank-you note. But the meal actually came from the young wife whose day is brightened by his simple courtesy. Better than it sounds (would have to be); includes a glorious walk through the colorful streets of Mumbai.

Right up front: Donald Rumsfeld represents everything despicable about Washington and the lying assholes who drag us all ever closer to tyranny. Whew! We feel better! Back to it: Here we get to see Rumsfeld’s ability to lie and rationalize away the most perverse, inhuman and illegal acts in an extended talking-head interview with Oscar-winning documentarian Errol Morris (“The Fog of War”). From ’60s congressman to instigator of the Iraq War to ultimate power broker, still manipulating YOU for his own profit, his influence goes unchecked after half a century. We actually vomited.

Hardworking indie stars Clif Prowse and Derek Lee wrote and produced this surprisingly good no-budget horror/sci-fi thriller to prove that found-footage movies don’t have to suck. Similar to (but better than) “Contracted,” it finds the pair traveling the globe, living life to its fullest until one of them comes down with a strange malady. To say more would spoil the fun, but this thing goes nicely off the rails. Very satisfying, with skinny/sexy Baya Rehaz as the all-important woman they meet in Paris.

An earnest, no-budget Sasquatch adventure/drama filmed “rat where it happened” in the wilds of Alabama. In a prelude, a deer hunter goes missing, and it is evident that something ate him. Something with really big feet. Fast-forward five years to find his offspring and film crew friends following Father’s footsteps, unafraid of the frightful fallout of fucking with Bigfoot. Good low-rent fun.

What a terrific idea! This doc takes us on a journey to discover the real and very deadly truth behind some of America’s best-known urban legends and their associated horror movie franchises. Includes The Hookman, The Candyman, The Babysitter And The Man Upstairs, and Phantom Clowns. Part investigation, but mainly just great spooky fun — though meeting the shocked police detectives and victims’ families may make this far too disturbing for some. We liked it.

Yeah, that title is a mouthful and we weren’t expecting much from this, our first introduction to the franchise, but we were completely blown away. A sequel to “Avatar: The Last Airbender,” it follows a young girl who has mastered all of the elements except air, which sets her on a quest in the dangerous steampunk world of Republic City. Nicely written, with great humor, innocent sophistication and animation that is simply superior: smooth and fluid, with an attention to detail like we haven’t seen in a decade. Worth your time.

Season 4 of Cartoon Network’s biting animated social experiment — delayed a good four years since the end of Season 3 — picks up without a hitch with an episode called “Pretty Boy Flizzy,” about a blues singer who helps Tom and Sarah with their marital problems. And if that sounds kinda lame, then you really need to spend more time in the boondocks! Politically savage and decidedly not-PC, this gut-busting Afro-centric cartoon takes on society in ways that even Fox’s gutsy “Family Guy” can only dream of. Our favorite this season? Granddad falls in love with his phone’s Siri, finding that she can be one nasty disembodied bitch when crossed!

The Slasher ’80s were well underway when a trio of low-budget scripters, including Ronald Shusett, who worked on the “Alien” films, decided to focus a bit more on the suspense before delivering the gore with this tale of park rangers besieged by a murderous backwoods mama. Stars Adrian Zmed (of course), with bits by Lewis Smith (“Django Unchained”), Daryl Hannah, Rachel Ward and Joe Pantoliano. Now on Blu-ray with lots of bonus goodies.

Australians really know how to make great horror films on the cheap. Case in point: This no- budget Aussie romp through the Indonesian bush in search of a fabled leopard. It stars Rupert Reid from the two latter “Matrix” movies as a conservationist who discovers too late that there’s a deadly, unearthly creature in these parts — and it’s stalking him! Co-stars Agoes Widjaya Soedjarwo from “The Phantom” and “The Island of Dr. Moreau” (1996 both).