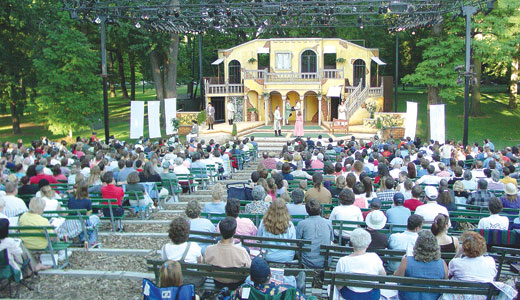 At 10 a.m. sharp on a Saturday, Matt Wallace addresses his “A Midsummer Night’s Dream” cast and crew, who are scattered around a morning sunlight-bathed wooden floor sipping coffee, stretching, strapping on character shoes, flipping through worn scripts.

“I just went to see our set,” he tells them, beaming. “I got chills walking on it.”

He moves around the large Artspace studio on Broadway, pointing to colored tape markings on the floor, explaining that their challenge with this newly expanded set would be not so much the width stage left and right, but the depth — the Central Park amphitheater stage now stretches several more feet downstage, jutting into the audience. Paul Owen, a 38-year Actors Theatre set designer who originally designed the amphitheater 22 years ago, has updated the structure and has also added platforms that wrap around the two adjacent trees, giving the actors even more room to play and, as Wallace points out, highlighting the beauty of the park.

The stage isn’t the only part of Kentucky Shakespeare’s 54th summer season that is bigger and more exciting.

Last August, Matt Wallace was appointed producing artistic director of Kentucky Shakespeare after some turbulence with his predecessor, which left the company at a low point. Wallace, who’d held nearly every position at Kentucky Shakespeare at one point or another, and left the company in 2010 thinking he’d never return, spent the beginning of his new tenure mending relationships.

“The first months were challenging,” he admits, “but that makes it all the more rewarding now that we got through it. And we didn’t just get through it; we got through it on top, and now we’re in a really good situation financially and artistically.”

As he points to Shakespeare in the Park flyers from the 1960s and ’80s that hang in his office, he says for this summer season, he wants to return to the original model: three shows, not just one or two. For William Shakespeare’s 450th birthday, he says, he thought it would be suitable to do a comedy, history and tragedy, so this season’s lineup is “A Midsummer Night’s Dream,” “Henry V” and “Hamlet,” performed by the company’s 17 repertory actors. On July 26, they’re doing a marathon night of all three in a row. And yes, the “Hamlet” cast is the same group that toured the show for the first Shakespeare in the Parks (with an “s”) series in nine local parks this past spring, which Wallace says was a success.

In addition to those three offerings, Kentucky Shakespeare’s student company, The Globe Players, will perform “Love’s Labour’s Lost,” but the festival doesn’t stop there. During the first two weeks of August, four community theaters will rotate their productions: Le Petomane Theatre Ensemble’s “As You Like It”; Walden Theatre’s “Pericles”; Savage Rose’s “King Lear”; and ShoeString Productions’ “Women of Will.”

That brings the festival total to 56 performances of eight productions over the course of 10 weeks, and each night will have a pre-show featuring a local band or community group. And, similar to the Urban Bourbon Trail, a new idea Wallace had for this season is a Festival Passport, where attendees can get their cards stamped at each performance and receive a T-shirt if they manage to catch all eight productions. There will also be at least one food truck and a Brown-Forman cash bar at each performance.

“I keep coming back to, ‘This is your Kentucky Shakespeare,’ and that has been my mantra all year,” Wallace says. “It’s a homecoming for me, and I want everyone else to feel what I feel. It’s going to be what I’ve always known it could be — it’s a festival, a community event.”

Before their rehearsal that recent morning, and after he’d already gone to Old Louisville to see the set, he guided me around the Kentucky Shakespeare offices and costume shop, where Oberon and Titania’s regal fairy garb hung on dress forms, designed by Donna Lawrence-Downs. In another room, he pointed to a table of neatly organized mysterious black objects, which he told me was their new, state-of-the art wireless microphone system, bidding farewell to their ongoing sound problem on the outdoor stage, which they were able to purchase with the help of donors.

“The community outpouring of support from the day I started has been 100-percent positive,” he says. “Just so many people. It’s really what has made this year so special.”

In his office also hangs a photo of a past Shakespeare in the Park performance, which he says he looks at for inspiration. The photo doesn’t focus on the actors on stage; it’s a view from the back of the audience where every seat is filled, with more people stretched out on blankets.