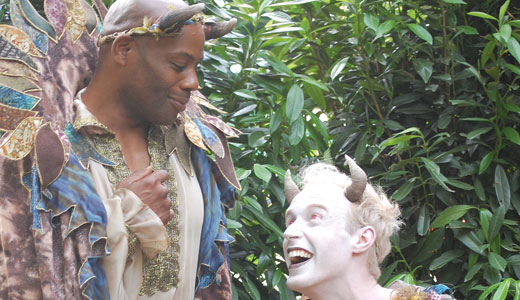 ‘A Midsummer Night’s Dream’
A Kentucky Shakespeare production. Continues at Central Park through June 22, then runs in repertory July 15-27 with other plays from this summer’s season. Tickets are free. For information, go to kyshakes.org.

For those who love the theater, there is no more inspiring play than Shakespeare’s “A Midsummer Night’s Dream.” It must have been close to Shakespeare’s heart as well, for here, more than anywhere else, he demonstrates in loving fashion the impossibly heroic nature of the theatrical imagination.

“A Midsummer Night’s Dream,” which opened last week in Central Park’s C. Douglas Ramey Amphitheatre, is the first installment of Kentucky Shakespeare’s summer season (and the first production under the leadership of the company’s new producing artistic director, Matt Wallace, who also directs this production).

The play offers a complicated tangle of comic plots that revolve around romantic love, parental interference, magical enchantments, love potions, fairy kings and queens, forest sprites, and a troupe of amateur actors — dubbed The Mechanicals, because in “real life,” they have day jobs as carpenters, weavers and the like — who hope to produce a play good enough to be performed as part of their Duke’s wedding celebration.

The romantic scuffles begin when Hermia (Karina Strange) refuses to marry the fellow (Demetrius, played by Madison Niederhauser) that her stern father (Kyle Ware) has selected. Rather than follow her father’s dictate, or submit to life as a cloistered nun, she opts to head for the woods with her lover, Lysander (Eric Werner).

The geometry of comic love requires a fourth corner — and a fifth, and sometimes more. So enter Helena (Maggie Lou Rader), who loves Demetrius — and somehow thinks that helping Demetrius track Hermia into the woods will help her cause.

The woods also happen to be occupied by a community of fairies led by a quarrelsome king and queen, Oberon (Dathan Hooper) and Titania (Tia Davis), and Oberon’s minion, the pale-faced sprite called Puck (Tony Milder).

But it’s The Mechanicals (Matt Lytle, Daniel Hill, Zachary Burrell, Jeremy Sapp, Jonathan O’Brien and the brilliantly pompous Gregory Maupin) who own this show. Their time in the woods and their clueless, comic, “let’s put on a play” ingenuity in figuring out how to stage “The Most Lamentable Comedy and Most Cruel Death of Pyramus and Thisbe,” and their droll performance when they finally bring it to the stage (coupled with the sly, snide commentary from their courtly audience), elicited ripples of constant laughter throughout. Yes, it’s a mockery, but it’s also Shakespeare’s knowing tribute to the enduring power of theatrical fantasy. Whatever happens: Don’t leave early.