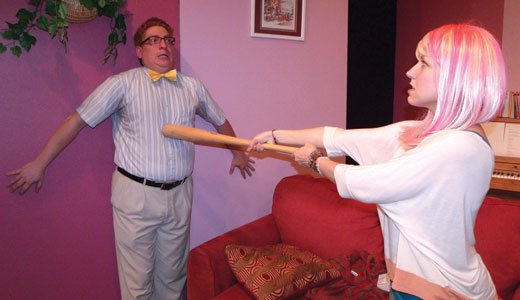 ‘Drinking Perfume’
Written by Lindsay Price. Directed by Beth Tantanella. Continues through June 29 at The Bard’s Town, 1801 Bardstown Road. For tickets and info, go to thebardstown.com.

If we’re stereotyping, such a title would probably suggest a romantic comedy or, dare I say it, a play version of a chick flick (ugh). But there’s an edge to it — just the thought of drinking perfume can instigate queasiness. Imagine a sweet-smelling tonic intended to be sprayed delicately upon your neck and wrists, inviting others to catch a whiff as you walk by, misused and instead poured down your throat, tearing your insides apart. Now, no one knows it’s in there but you.

Lindsay Price’s script is all about shattering stereotypes, and the nature of this romantic comedy is the type that is very easy for the audience to watch and understand, but which can pose quite a challenge for actors and directors, who are tasked with finding the depth and those quiet moments within the banter. Even the bright, disco-y music that plays as the audience files into the theater is what you’d expect of a romantic comedy as you take in the pink walls (with vertical stripes) of Beth’s apartment.

We never actually meet Beth, though her presence is known throughout the piece and she’s the only thing Stan and Claudie (Sean Keller and April Singer) have in common — or so they think. Claudie sports bright pink hair, Stan wears a bowtie — two seemingly minor quirks that stand out and overtake each personality, and are mentioned constantly. Stan has practically become his tidy neck accessory, which nearly chokes him, same with Claudie’s “Jem and the Holograms” locks. They judge one another by these immediately, but we soon learn they’ve already given in to the reputations their appearances have invited society to create for them — almost.

Stan and Claudie are the only characters who are actually seen, and Singer and Keller carry this long, fast, heavier-than-it-seems script with unyielding energy and a sharp, consistent pace, helped by director Beth Tantanella’s clean, specific blocking. They dart back and forth across the stage with adept physical comedy and bubbling chemistry.

Singer and Keller never allow their energy level to drop even for a second, but it makes for an overwhelming first two-thirds of the show, which feels like it is spent almost entirely yelling. Their alarm at their situation is funny, but at times it feels like they’re pushing too hard. They have room to pull back just a tiny bit and allow the humorous lines to flow more innocently into the dialogue, catching us off guard. Some of the jokes feel anticipated; at some points it’s effective, like when Claudie is looking desperately for a baseball bat that is in plain sight the entire time. It’s a tricky balance to pull off. There are so many opportunities for laughs, and actors want to make sure they get them, but not by using too much force.

That said, once the actors calm down and have their quiet, sincere moments, the beauty and complexity of “Drinking Perfume” really shines through, and the contrast makes it worth it. The extreme intensity of the first act conveys how incredibly trapped they both feel in the caricatures of themselves, and it is a profound sigh of relief, both for the actors and the audience, when they can finally let go. It’s an important lesson enfolded in a sweet summer show.