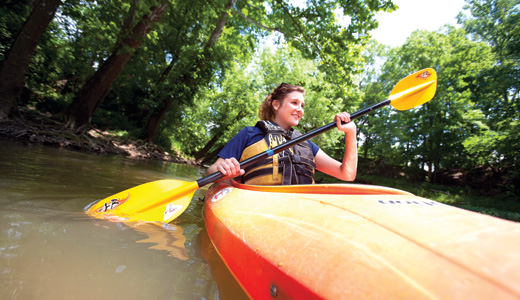 Kayak @ The Parklands
The beauty of being a late adopter is you get to maintain a lofty, wait-and-see kind of an attitude, while others do the dirty work of getting the latest new thing perfected — like the kayak. Skipping from seal-skinned Aleutian models to today’s resin skimmers, wait long enough and somebody thinks of putting in a comfortable seat and a dry box, and then — like color TVs and TV dinners — the price finally plummets to a point where you can pick up a nice kayak, with paddle and life vest, for maybe $450. Add an old pair of “creek shoes” and a water bottle, and you’re set to go.

Thrills @ Kentucky Kingdom
The Big Kahuna, Tornado, Deluge — Mitch McConnell’s nicknames for his penis, or rides at Kentucky Kingdom? (Or both?) After years of waitin’ and speculatin’, the no-longer-Six-Flags-affiliated Kentucky Kingdom and Hurricane Bay is back in action, just in time for summer fun (when kids should, more productively, be on a year-round schedule of academia to keep their impressionable minds focused and further prepare them for the realities of the adult working world they will inherit sooner than they realize — but I digress).

So if you need a vacation like some of us, or just want a fun Saturday of thrills ’n’ spills, enjoying dozens of newly built or refurbished rides, head toward the airport, but don’t go quite that far. Business tycoon Ed Hart (allegedly an inspiration for the classic TV series “Hart to Hart”) has stepped back in again as head of the formerly most-popular place in the land to make our Kingdom wet, safe and profitable once more.

Whatever happens, at least it’s not in the hands of those stinky Koch brothers. There’s now a bunch of new rides (in addition to old favorites), 5-D cinema (because, obviously, 3-D still is not what it should be), rescued sea lions, flying scooters, a Mega Wedgie … if there’s anything you wanted that they don’t already have, you’ll never be happy, so why don’t you stop being such a cry baby already, you big baby? More info: kentuckykingdom.com. —Peter Berkowitz

Bike @ Waterfront Park
Did you know May was Bike Everywhere Month? Indeed, the local bicycle advocacy organization Bicycling for Louisville, along with Metro’s Bike Louisville, designated it so and celebrated by hosting a variety of themed meet-ups and rides throughout the month, all culminating with the annual Bike to Work Day held last Friday. If you missed all this, it’s probably because your mind is a car driving too fast and not paying attention to all of the amazing things around you. Lucky for you, there is nothing stopping you from slowing down and making June Bike At Least One Place Once Month.

One great place to start is Waterfront Park, where you can inexpensively and easily rent a set of wheels by the hour, day or half-day at Wheel Fun Rentals. Here, those uninitiated into the wonderful world of bicycling don’t have to worry about riding alongside car traffic or not having enough stamina to make it up any hills. Carouse along the riverfront or cross the Big Four Bridge. (Their stand is located right off the finally completed bridge to somewhere.) They offer several types of bikes, including tandem bikes for you lovers and low-rider choppers and surreys for people who can’t be bothered to balance themselves.

If all that makes you feel too much like a tourist, head instead to locally owned Scheller’s Fitness & Cycling. They’ll rent out road and hybrid bikes, as well as bike transport add-ons for your car, so you can take the rental wherever you please. More info: wheelfunrentals.com and schellers.com. —April Corbin

Movies @ Georgetown Drive-In Theatre
Ah, the drive-in movie theater. A place where you can watch a first-run movie from your car, protecting yourself from the human interaction required at a typical movie theater. Also a place that tends to remind people of the classic “Grease” scene featuring John Travolta and Olivia Newton-John watching “The Blob.” But, as the first drive-in celebrates its 81st birthday this summer, they are increasingly difficult to find and experience. Thankfully, the Georgetown Drive-In Theatre lies only 20 minutes from Louisville.

The Indiana theater has two screens, each showing two flicks a night. Showings are weekends only until June 13, when nightly showings begin for the summer.

Of course, there is a concession stand, because what would a movie be without tons of snacks? The theater sells the normal movie foods like popcorn, candy and hot dogs (are hot dogs considered a “normal movie food”?), and while sneaking snacks in via your car is probably easy, the prices at the drive-in are much lower than their movie theater counterparts.

The Georgetown Drive-In has been around since 1951 (that’s 63 years!). Originally starting as a single screen, they have added a second screen and kept up with changes in technology by changing the audio to stereo FM radio. On June 27, they will make another jump: digital projection.

For drive-in virgins, their website has some FAQs to help out along the way. Upcoming films and times are also featured. An important thing to note: The majority of the theater is cash only. More info: georgetowndrivein.com. —Olivia Krauth