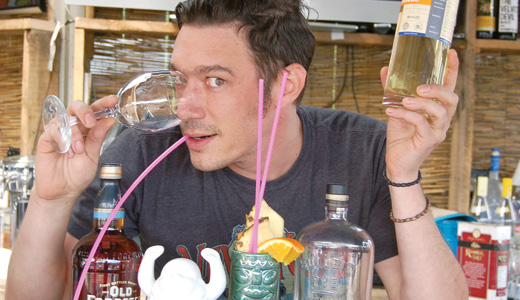 When I asked bartender/mixologist/all-around-cool-dude Jared Schubert of the Monkey Wrench to help me with a piece on summer drinking, I didn’t realize he’d go all out. I was expecting a few fancy cocktail recipes that included rum and fruit punch, and maybe a light pilsner I’d never heard of. But when I showed up to the Lono Lounge (the Wrench’s upper deck) one Friday afternoon, Jared had five intricate drink stations assembled on the bar like he was trying to nab first place at a science fair. This man takes his job seriously. He even had a title for his presentation: “Jesus, people, drink better this summer!”

Jared believes that drinking better doesn’t necessarily mean drinking more expensively — it’s about being mindful of what you’re putting into your body. He points out that some liquors and beers are full of artificial flavors and sweeteners. “We avoid these things in our food, why wouldn’t we avoid them in our drinks? They’re being processed the same way, after all,” he says.

Drinking better also entails an adventure — branch out and try things you may not be familiar with. “Trust your bartender,” he stresses, “especially if they have a wellspring of knowledge about the products they serve.” OK then, let’s put our trust in Jared and hear him out. If mojitos and Coronas are your go-to summer drinks, you’ve got a whole new world to explore.

Beer
First up was the beer station, where Jared had a bottle of Crabbie’s Alcoholic Ginger Beer awaiting to pour over ice. It was delicious — crisp, refreshing and mild — but it wasn’t weak like other trendy ginger and grapefruit beers out there. With an ABV of 4.8 percent, that’s a little less than a Budweiser but more than a Bud Light.

Wine
“Not all pink wine is made equally,” Jared said about the bottles of rosé he assembled on the bar. While a rosé is not quite red and not quite white, it is a tasty and light way to go on a summer afternoon (and if it’s a Sunday, the Monkey Wrench offers their rosés half-off). The wine is served chilled, of course, and gives off a sweetness that makes you want to keep sipping. It’s like cotton candy for adults.

Tequila Shots
Shots often get a bad rap — some consider them a ritual of yesteryear: traditions you leave behind as you grow older and more mature. I say bullshit, and Jared agreed. “Tequila is like wine,” he said and explained how it’s made in the agave fields of Mexico. But he also cautioned against drinking bad tequila. “If your tequila needs a celebrity endorsement, it’s probably not good tequila.” Jared showed off the bar’s array of organic tequilas, most of which wouldn’t be any more expensive than a Cuervo or Patron.

Gin & Tonic
Jared named this chapter of his presentation “Have a good fucking gin & tonic, for chrissakes,” and I stood back as he assembled a drink with more garnishes than a bloody mary. You need three things to make a successful gin & tonic, I learned: good gin, good tonic and good garnish. Over ice, Jared poured in some Bluecoat American gin, a bit of fancy tonic from a bottle and added garnishes like cucumbers, cilantro and other green herbs and vegetables I’ll never know the names of. Limes, he said, don’t always have to be the only garnish invited to the party. The more, the merrier makes this a refreshing, cooling, light summer drink.

Bourbon Tiki Drinks
Jared is most excited about his Bourbon Tiki Drinks, some of which he’s rigged to come out of a tap at the Lono Lounge. In the spirit of the tiki, they’re also served in fun glasses with long, colorful straws. First up is the Happy Bouda, which includes bourbon, triple sec, guava nectar and lime cordial. Next is the Polynesian Paralysis, which is made with bourbon, juices from lemons, oranges and pineapples and something called orgeat syrup. The Wrench will rotate these drinks on the tap machine, or they can make them from scratch if that’s what you fancy.

As for general tips on summer day-drinking, Jared suggests you drink plenty of water, know your limits, eat and share (via punches, pitchers and bowls, which have become popular at places like the Wrench, St. Charles Exchange and El Camino). His last words of advice: “Day drinking is a marathon, not a sprint.”