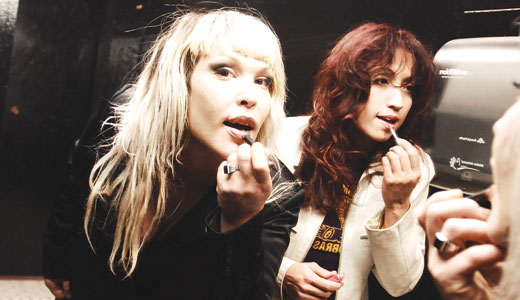 Sometimes there’s an elephant in the room, and sometimes there’s a 5-foot tall, all white painting in the room — a very expensive, all white painting that is inches away from destroying a friendship point blank. Bunbury Theatre closes out its 28th season with Yasmina Reza’s award-winning comedy about three friends and their dispute over a white painting that one of them bought, insisting it isn’t a joke. Directed by Madison Cork and featuring Dale Strange, Phil Lynch and Josh Kroll, “Art” ropes us in to Marc, Serge and Ivan’s discussion about the standards by which to judge true art, which quickly spirals into personal territory and becomes a battleground for pointing out one another’s failures until someone busts out a black marker. A Newsweek review described this 1998 Tony Award Best Play winner as “a marriage of Molière and Woody Allen.” —Jane Mattingly

On Friday, the Filson Historical Society will host the most summery summer event in the history of summer — and they know their history. Moon Pies and Moonshine at Oxmoor Farm is going to be an old-fashioned evening picnic, complete with fried chicken dinner, moon pies, live music, dancing, yard games and moonshine. Oh, and this isn’t any ole moonshine. Limestone Branch Distillery will provide six signature styles, including a new Moon Pie Moonshine. True to the educational mission of the historical society, bourbon historian Mike Veach and master distillers Steve and Paul Beam will also be on hand to talk about the history of moonshine in Kentucky and the modern-day process of making moonshine. —April Corbin

There’s nothing worse than a bad story that goes on endlessly. But slap on a five-minute limit, heated competition and the opportunity to judge others, and the Moth GrandSLAM is something I can get behind. This event is the culmination of the monthly StorySLAM held at Headliners, in which Louisville storytellers share tales with nothing but a microphone and a given theme. The theme this go-around is “When Worlds Collide,” and the participants consist of 10 winners of past local StorySLAM’s who will be judged by chosen members of the audience. GrandSLAM is sponsored by not-for-profit organization the Moth and WFPL, whose Gabe Bullard and Erin Keane will be hosting. Even LEO’s own April Corbin will be sharing her story of collision, so you’re running out of reasons not to come. —Matthew Adams

Hailing from the mean streets of the city for which they are named, The Detroit Cobras are here to make you dance to their slinky style of garage rock. The group, with an ever-changing lineup but for singer Rachel Nagy and guitarist Mary Ramirez, almost exclusively plays covers. Most of their repertoire is retro tunes that would have their place at a drive-in diner, but with a tinge of a snarl added by Nagy. Big fans of the music they cover, they maintain a distinct awareness of the inherent corniness of their source material. The Cobras, as a result, are anything but corny — just fun rock ’n’ roll. The opener, Nashville’s Pujol, are touring in support of their new album Kludge, which was released last month. —Ian Ording

While it has felt like summer for a few weeks now, summer does not officially begin until June 21. This is not stopping those in Lyndon, who will be bringing the Lyndon Summer Festival to crowds in what is technically still the spring season. The festival, brought by Lou-E and the City of Lyndon, will include your typical summer fun fare: craft booths, food, activities and rides for the young ones and a beer garden for the not-so-young ones. Live entertainment will also be available — from BlueZenGrass, Jeni Carr and Twangtown, and The Vinyl Kings — and everything will conclude the summer way: with a fireworks finale. —Olivia Krauth

The Love Goddess. Aphrodite of the Accordion. Diet Dr. Pepper spokesperson. Recently ordained minister and leader of the religion of “Judyism.” It is easy to see why comedian Judy Tenuta kicks off her bio by saying she is “the most famous person who has ever lived.” Tenuta has multiple stage, television and film credits to her name, but it is her comedy credits that she will be showing off when she comes to the Connection this weekend. Her Grammy-nominated work has been described as “outrageous, mind-blowing comedy,” and Tenuta stands by that description. Sounds like if you need a laugh, you can go to her, and if you need someone to officiate your wedding, well, you can go to her for that, too. —Olivia Krauth

After spending a great deal of his childhood in hospitals and under the care of doctors and nurses, 20-year-old Louisville artist Sparrow (Jesse Lane) wants to honor and help out the people who helped him. His upcoming art show “Graphica” will show off his works depicting explorations of pain and dealing with disease. When he was young, his love of art was fostered by artistically minded therapists who helped him express himself with the brush. To ensure kids growing up in a similar manner have the same opportunities he was afforded, 80 percent of the proceeds of “Graphica” will go to the Kosair’s Expressive Therapy program. In addition to his art, there will be an open mic for spoken-word poetry and music. —Ian Ording

Art on the Parish Green Festival

Most festivals seem to have one goal: to provide a fun time for attendees. The eighth annual Art on the Parish Green Festival is different. This festival sets out to provide local artisans the chance to sell their work and gain publicity (even some top high school artists get a booth), as well as showcase downtown New Albany’s growth and help support their community outreach (all benefits go to Shepherd’s Kitchen, the church’s community feeding program). There will be your normal festival festivities: live music, food plus a beer and wine garden, arts and crafts vendors, games and fun for the kids. And then there will be your not-so-typical moments: old-fashioned carriage rides in historic New Albany and a “Jazz Mass on the Grass” Sunday morning at 10 a.m. —Olivia Krauth

Speedy Ortiz is a band that’s been sad before, but isn’t necessarily sad right this second. The delicate, precise lyricism of vocalist Sadie Dupuis punctuates the group’s look back at their past, both in subject matter and in their ’90s heavy-indie-rock feel. They manage to avoid sounding whiny or sappy about heartbreaks or bullies from their school years, and they offer the grown-up’s perspective on how tough it was growing up and why that matters later in life. Their tunes bounce back and forth between light guitar plucking and distortion-riddled, punk-conceived power chords, juxtaposed to keep audiences on their toes. Chris Brokaw, a ’90s indie-rock mainstay of Come and Codeine, and Louisville psychedelic rockers Murals open for the Massachusetts natives. —Ian Ording

A legend unlikely to appear here again, this is a wonderful opportunity to see living history, laugh your tail off and feel bad about your ancestors. All Americans should know that Dick Gregory was one of the first in a long line of great, socially aware comedians; it’s hard to imagine Pryor, Carlin, Chris Rock or Jon Stewart without his influence. Now 81, Gregory — recently saluted on “Arsenio” and TV One — returns for this one-night-only appearance. While his act might not change the world now in the same way his civil rights marching or healthy diet lessons could, the man remains sharp and demands to be heard — especially by any still clinging to an old-world Southern identity. As one of his most famous jokes goes, “I know the South very well. I spent 20 years there one night.” —Peter Berkowitz

Flowers in water are something we really don’t analyze. It’s simple; if cut flowers don’t have water for nourishment, they quickly wilt. This scenario describes most art still lifes where the focus is on the flowers and the water is secondary. But what if the water became as important as the flower? That’s what Madison Cawein’s new oil paintings explore, the equal interaction between the two. The dynamic has changed, and what a dynamic it is. His paintings are a swirl of movement, light and reflection, with flowers floating in water that are a captured moment in time. Photorealism is hard work, and painting in multiple thin layers makes it even more labor intensive. You will have to look twice to make sure you’re not looking at the photograph that inspired the painting. —Jo Anne Triplett

The Louisville Visual Art Association has had quite the success with Artebella. Started in 2012, the program sends a new piece of local art right to you. They call it “inspiration delivered daily to your inbox” (you can also request it to be weekly), and the numbers are impressive — more than 250,000 viewers in 107 countries. LVAA has recently mounted the 2014 Artebella Invitational, an exhibition of 16 Artebella artists chosen by other Artebella artists. The peer-selecting-peer exhibition is a love fest, reveling in the acknowledgement of quality bestowed from one to another. The media is as varied as the artists themselves; just a few invited to show are Vallorie Henderson, Caroline Waite, Victor Sweatt and David Iacovazzi-Pau. —Jo Anne Triplett