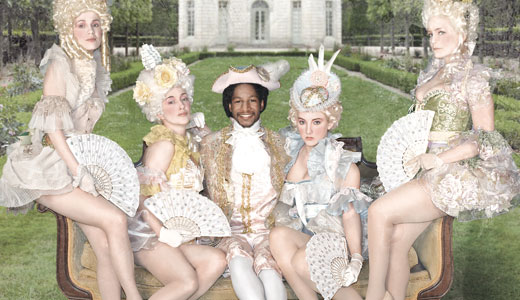 Wine and chocolate go together like a successful marriage — one complements the other, there is no yelling and they laugh together a lot. They are fine and competent on their own, but you get them together and the sparks just fly. Louisville Stoneware is celebrating the union of wine and chocolate at their next Third Thursday Lifestyle Series, which is designed to showcase local artisans along with their hand-made pottery. The event will bring together Old 502 Winery and Cellar Door Chocolates — both Kentucky Proud products — and attendees get to sample and learn about both. Best of all, it’s free! How can you turn down free wine and chocolate? Stoneware is celebrating 199 years of hand-making and hand-painting pottery. Go show respect. —Sara Havens

A band sharing the name of the Wright Brothers’ testing grounds and who describe themselves as “a band from Chicago that drives fast” on their Bandcamp page and “KEYBOARD FEEDBACK” on Facebook, Kittyhawk wants to sprint into your heart and invite you to a sweet early evening show. They want you to crowd in close and sweat through your flannel shirt to their old-school, lady-singer-led emo tunes. They’ll be playing with four other groups, including Louisville punks Xerxes, pop-punkers Fast Friends and indie rockers The Foxery. Nashville emo group Free Throw are touring with Kittyhawk and will round out the night. Get there on time; the five-act bill has to get off stage for a 10 p.m. weekly open mic night. —Ian Ording

Reuben and the Dark

Rye’s “Back Porch Sessions” summer concert series is meant to help boost rising local artists, but Reuben and the Dark is probably the furthest from local the series has gotten in its first two years. The Calgary-based band has a freshly released album called Funeral Skys, which is full of stories from leader Reuben Bullock’s notebooks of poems, expressing his feelings about his childhood and what it was like to grow up as a preacher’s son, only to leave the faith. The band creates a blend of folk and introspective soul, giving you a “feeling of hot and cold” (that’s a direct quote from the album’s lead single, “Rolling Stone”). Louisville-based Mote and Nashville-based Judah and the Lion round out the night. —Olivia Krauth

(Insert joke about leaving your husband at home here), because the self-lauded “country’s No. 1 ladies’ night out” has a sequel! “SPANK! Harder” picks up where last year’s “SPANK! The Fifty Shades Parody” ends, which is right about when I started needing a sequel. The comedy, now on a global tour of 160 cities, follows female author E.B. Janet as she writes her second novel and is carried around by sculpted men in briefs and neckties. This presumably more forceful spanking includes parody of more than just “Fifty Shades of Grey” without skimping on sex appeal. But forget the “lady”-centric advertising; “SPANK! Harder” is perfect for dudes’ night out, obligatory time with grandma or even one guy who’s confident enough in his sexuality to treat himself. —Matthew Adams

The winner of this year’s Bard Award will see its world premiere at The Bard’s Town on Thursday, promising laughs and a not-so-mysterious mystery. “The audience is in on where it’s heading, and the characters are in on where it’s heading, and it’s quite simply a delight to see it unfold,” says Bard’s Town owner and executive producer Doug Schutte. “Drinking Perfume” is a two-character comedy in which a man and woman must confront their obvious differences and reveal some less obvious secrets. Playwright Lindsay Price averages 300 productions a year, both domestic and international, and has garnered many accolades in her career. “Drinking Perfume” is recommended for ages 14 and up, with a “pay-what-you-can” ticket price. —Matthew Adams

‘Marry Me a Little’

Stephen Sondheim’s classic ’80s musical “Marry Me a Little” tackles one of the oldest realities of living in an urban setting: singing at people in the other apartments in your building. The play is comprised almost entirely of songs from other Sondheim works, arranged in order to tell the dialogue-free tale of two lonely single people living adjacent to one another in a New York City building. The always quality Pandora Productions is putting on the piece with their own twist — the four characters in the show will be a gay man, a lesbian, a bisexual and a transgender person. If past iterations of the musical are any indication, it should be an entertaining, music-filled night at the theater. —Ian Ording

So you bought a Hawaiian shirt during your week in Destin, not realizing the fashion wouldn’t translate quite as well back home. We’ve all been there, man, and now Churchill Downs is thankfully offering a solution. This week’s Downs after Dark is celebrating the official start of summer the only proper way: with LED tiki torches and a lot of alcohol. Music will be provided by a DJ and band Lunar Beach House, whose repertoire includes more Jimmy Buffett songs than you knew existed. The event will also include traditional hula dancers, specialty drinks from sponsor el Jimador and free Hawaiian-style leis at the gate. So get out your floral print and flip-flops and help bring in the summer. As for the annoying cowboy hat you bought last year, well, I guess you’ll have to wait for the state fair. —Matthew Adams

Described as a “modern day Vaudeville-style burlesque variety show,” the newest Va Va Vixens production has arrived. Along with nonprofit Art Sanctuary, the same producers who have brought you a slew of sold-out productions have created another possible hit with the “Va Va Variety Show.” More than 25 men and women will take part in the titillating show, which is slated to include everything one would imagine: dancing, a couple of Marie Antoinette-style wigs, fabulousness, contorting and lots and lots of glitter. Oh, and there might be a kissing booth, and there will definitely be entertainer-patron flirting going on. Both Va Va virgins and veterans are welcome to attend. —Olivia Krauth

Satan’s On His Way and He Wants His Drugs. No better sentence could open this than that, the name of the debut album of Touch AC and Filthy Rich. The emcee and producer linked up on Rich’s compilation The Filthy Fifteen; their chemistry led to two separate group projects, the first of which they debut Saturday. It’s 16 tracks of pearl-clutching multisyllabics behind brooding sonics, but, you know, funny. There are songs called “Unholy Ghost,” “Barabbas” and “Into Temptation,” — more Stryper than rapper, sure — so why not counter those with “Locutus” (yes, Jean-Luc) and the exceptional “Poster of a Cat,” because why the hell not? What’s best, it all works. Touch AC is a high-energy performer, and Filthy Rich brings the live band. Support comes from Mr. Goodbar, Kogan Dumb, Psychonautics and B-Rad from the Breeze. —Damien McPherson

Though the term “extreme hiatus” seems like it would result from some sort of “Outsiders”-style rumble or a devastating betrayal, the members of the Walkmen say they’re on as good of terms as ever. In fact, frontman Leithauser has put together a solo record with help from one of his erstwhile bandmates, as well as some other big indie rock names. Leithauser has enlisted the musical prowess of Rostam Batmanglij of Vampire Weekend, Morgan Henderson of Fleet Foxes, Richard Swift of the Shins, and Walkman Paul Maroon to write and record his long-anticipated album, which was released on June 3 after some delay. You can expect the aforementioned Henderson and Swift to be on stage with Leithauser, as they’re in the touring band for the D.C. native’s project. —Ian Ording

Laura and Jeffrey Skinner curated “Transformations,” the photography show currently at PYRO Gallery. When they put out their call for art, their premise was simple: “We love stories in which one thing turns into another, quite different thing. Perhaps this is because we ourselves are always in the process of becoming, turning from something into something else.” The artists who responded have an abundance of stories to tell, including Brenda Wirth’s “Autumn” and Victoria Crayhon’s marquees. Photographers/college professors are well represented by the likes of Anne Langan, Mitch Eckert and the Mary Carothers and Joyce Ogden collaboration. “(The) transformation is part of a sea of larger change …,” continue the Skinners. “Nevertheless, these photographers have found ways and means, and we can be grateful for the result.” —Jo Anne Triplett

Zephyr Gallery continues its mission of presenting innovative art with its third project. Curated by Ryan Daly, Jacob Heustis and Suzanne Weaver, the former Speed Art Museum curator of contemporary art, the exhibition is in two parts. “Analog” is currently on display through July 5, and “Analogy” will run from July 10-Aug. 16. “Analog” features art based on fluctuations that requires a shift in perception. When is an oil painting something other? When the focus is on the paint itself, as explored by Heustis. Daly is fascinated by photography that displays how light changes as time passes. The “Analog” artist reception, with an audio/video performance, is on Friday from 7-10 p.m. “Analogy” continues this analytical process with a multi-artist collaboration. That reception is on Friday, July 25. —Jo Anne Triplett