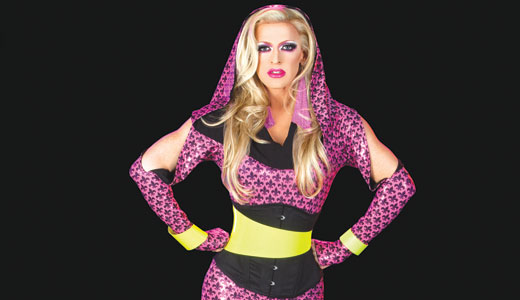 At this point, we shouldn’t need to sell you on WFPK’s Waterfront Wednesdays. There’s free music by the river once a month, every month, all summer long. Do you like happiness? Do you like free stuff? Need we say more? This month’s installment is headlined by alt-country stalwarts the Old 97’s. Still goin’ strong and employing questionable apostrophes after 20-plus years, the Dallas quartet hits the road once again to tout their 10th studio album, Most Messed Up. Despite some lyrics about the members’ long careers and ever-increasing age, there’s still plenty of giddy-up in the group’s brand of country-rock, which they describe as the cowboy boots-wearin’ love child of “the twangy stomp of cowpunk and the melodies of power pop.” Georgia’s The Whigs and Louisville native Dawn Landes round out this yeehaw of an evening. —Ian Ording & Jennifer Harlan

Sometimes I get bored in the summer sitting in bars. After the winter we had, there’s really no reason not to bask in the sun every chance we can get. We complained for so long, and now the hot, hot heat is here — embrace it. One opportunity where you can soak up the sun, be engaged in a team sport and drink dirt-cheap beer and liquor is every Thursday at Turners, when the Derby City Alternative League (DCAL) softballers take the field. Each of the seven teams plays for about an hour, and the Turners Fresh Grille is open all night long. Besides the usual ballpark fare like hamburgers and hot dogs, they offer a full bar — the crowd favorite is an adult version of the snow cone. Blue raspberry, anyone? With team names like Fluffy Unicorns and Scared Hitless, the DCAL encourages everyone to come out and cheer them on. —Sara Havens

David Rawlings has forged his career as a collaborator, collecting producer, performer and songwriter credits on albums by Bright Eyes, Ryan Adams and Old Crow Medicine Show, as well as a long-standing collaboration as Gillian Welch’s songwriting and performing partner. But it wasn’t until 2009 that Rawlings came to the foreground with the LP A Friend of a Friend, under the guise of the Dave Rawlings Machine. Though no new music has been released since, Rawlings is in the midst of a summer tour with his new machine, consisting of Welch, the Rawlings-produced Willie Watson, “Inside Llewyn Davis” contributor Paul Kowert, and John Paul Jones, who’s from some band called Led Zeppelin. Armed with a mandolin and double bass, Rawlings and company pull from a repertoire of traditional songs, covers and other tunes from the learned music-maker’s full-bodied career. —Matthew Adams

Every month, the FAT Friday Trolley Hop offers folks an eclectic mix of live music, sales and entertainment along Frankfort Avenue. This month includes an Irish music “seisuin” — we are told that’s a fancy word for a jam session — over at The Irish Rover and live local blues at The Comfy Cow. Those sound awesome, but what strikes our fancy the most is Merengue on Mellwood. Hosted by Eyedia, this event will feature groovy Latin music and skilled dancers eager to teach visitors a new move or two. The event benefits the Network Center for Community Change, or NC3, which decided to proceed with this event despite last week’s announcement that they will shut down operations on July 11. The decade-old nonprofit still needs donations to fulfill their outstanding obligations, and, equally as important, they deserve to be celebrated with dancing and merriment. —April Corbin

Sometimes in life, you lose. Past that, you have two options: be a sore loser, or convince yourself that you were the true winner and move on. Of course, the latter option is a lot easier if you’re fabulous by nature — say, a drag queen — and have Entertainment Weekly on your side. Despite getting voted off of “RuPaul’s Drag Race” not just once but twice, Pandora Boxx continues to be successful, from being named EW’s “America’s Next Drag Superstar” to creating multiple top-100 dance hits. And now Pandora (aka Michael Steck) will perform with the Play Mates of Butchertown’s Play Dance Bar in a one-night-only type of deal. Show starts at 10 p.m. and runs until 2 a.m. —Olivia Krauth

American Printing House for the Blind

The American Printing House for the Blind, the world’s largest organization focused on creating and making products for those who are visually impaired, is using a slightly unusual method for raising awareness of blindness: a film festival. They will be showing the Oscar-nominated “Butterflies Are Free” on Saturday, which will be followed by a discussion of the portrayal of blindness in cinema. The 1972 film follows blind man Don Baker (Edward Albert) as he moves into his own apartment and meets his neighbor, an aspiring actress named Jill Tanner (Goldie Hawn). Other films in the series are “See No Evil, Hear No Evil” (July 26) starring Richard Pryor and Gene Wilder, and “Ray” (Aug. 16). RSVP for the free screenings by calling 899-2213. —Olivia Krauth

What do Jennifer Lawrence and Muhammad Ali have in common? They’re both on the cover of Kris Applegate’s new book. Oh, and they’re both from Louisville, which is what Applegate’s new book is about. “Legendary Locals of Louisville” chronicles hundreds of historically significant individuals who have contributed to Louisville’s history, from the Kizito cookie lady to the “unsung legends” you may not know. Applegate is a native Kentuckian who previously co-authored the book “Around Lake Cumberland.” She will sign copies of the new book at Carmichael’s on Saturday. Can’t make it? No worries. There will be various other signings throughout the summer: Barnes & Noble Hurstbourne (July 19), B&N Paddock Shops (July 26) and A Reader’s Corner (Aug. 29). —Matthew Adams

Which U.S. lake is the largest by volume west of the Mississippi River? Hell if I know, but on Saturday, The Cure Lounge will host pub trivia with question-askers Gus Bus as part of the Shelby Park Fundraiser. Prizes include gift certificates and merchandise donated by an array of local businesses. If thinking’s not your thing, there’s also a raffle, for which the $1 tickets also work as $1 off your next meal at Smoketown U.S.A. Acoustic soul duo Nzuri Music will perform, as well as local spoken word collective Loohavull Lip Slam. Proceeds benefit the Neighborhood Association of Shelby Park and will provide public-use books and computers for the community. Ohh, Lake Tahoe. I just looked it up. —Matthew Adams

Seeing as “The Big Bang Theory” ruined nerd jokes for all of us, I’ll just be serious in telling you that the Derby City Comic Con is returning to Louisville this weekend for its fourth year. Leading the slate of guests are New York Times bestselling authors Mark Waid and Robert Venditti, and the original illustrator of the “The Walking Dead” (which was turned into a TV show or something), Tony Moore. The convention also features panels on topics like gender politics in comics, crowd funding and film adaptations. Be sure not to miss the after-parties at Haymarket Whiskey Bar on Main Street for steampunk and live art. And, of course, there is the costume contest, but beware — “…body paint, latex, pasties, etc., are not considered adequate body coverage.” Ha, nerds … got ’em. —Matthew Adams

Purple Heart recipient Staff Sergeant Patrick Shannon doesn’t think suffering from a military injury should affect how you live your life. That mindset drove him to help create Helping Hands for Freedom, a nonprofit organization focused on helping members of the military and their families when faced with injury or deployment. The nonprofit is hoping a night full of laughter will help them with their mission as they host Humor for Heroes. Of course, there will be comedy — featured comedians include headliner Alex Ortiz and Louisville-native Rich Ragains. There will also be a silent auction during the show. All proceeds will go to the organization. —Olivia Krauth

Do you fall asleep each night counting koala bears, while visions of Foster’s dance in your head? If so, Monday is your day. Cut Copy, a four-man synth-pop group out of Melbourne, has topped the charts Down Under and toured the globe with the likes of Franz Ferdinand and Bloc Party. This week, they bring the Aussie to the U.S.A., pumping out funky electronic grooves to lucky Louisvillians. With tunes that make it nigh impossible to stand still, this show is sure to result in some heavy duty sweating, and possibly a twisted ankle or two. The group’s newest LP, Free Your Mind, has them touring through both Americas and much of Europe, so you have no excuse not to make the measly trek down to Headliners to help these jet-setters ring in WFPK’s third birthday of “Night Visions.” Americans CLASSIXX and fellow Aussie Nile Delta round out this dancetastic evening. —Ian Ording & Jennifer Harlan

Here’s your art history lesson for the week: Vanitas paintings, popular in Renaissance art, are a reminder that death comes to us all. Usually they consist of objects used in life, topped off with a skull. Perhaps the public became tired of being told they were going to keel over soon, because the style eventually dropped the memento mori to become beautiful floral and food still lifes. The vanitas oil paintings by Judith Lewis fall into the later category. “Painting the wonders of everyday life is my passion,” she says. “It allows me to translate my thoughts and feelings into visual images. As a painter, I wish to evolve to a higher level of awareness and expression, and to share my world of peaceful contemplation with others.” —Jo Anne Triplett