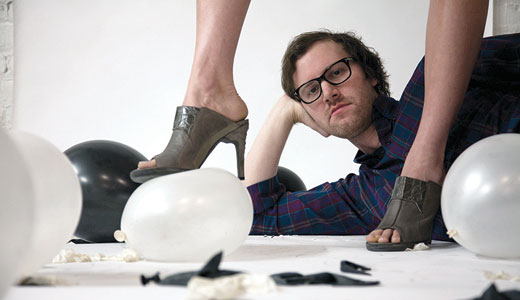 Straddling the line between high and low art, between dive bars and academia, between rigid classical training and anything-goes improvisation, Louisville’s experimental musicians explore the outer limits of sonic possibilities at a pace rivaling that of major metropolitan hotspots — whether anyone listens or not.

“It’s enormous,” says Joee Conroy, founding member of the longstanding, self-proclaimed “pan-idiomatic free jazz” group Ut Gret. “It’s the equivalent of what New York City was in 1977 and 1978. It’s that big, and it’s better, because there are no real weak points. We’re blessed in that we have so much creative energy and talent, and cursed in that there’s not much of an audience for it. But because there is no audience, that may be why there’s so much talent. You have to make music you’re convinced is worth doing. Otherwise, there’s no point.”

The accepted definition of “experimental” music is about as vague as it seems, essentially boiling down to the tried-and-true “I know it when I see it” approach. Some musicians meticulously plan out each note, mood and texture, while others simply gather their favorite collaborators together with a pile of noisemaking tools and see what they can conjure up in the moment. Yet the city’s collective of artists, organizers and promoters offer each other a great deal of support, despite only the loosest conceptual leanings threading through each individual’s contributions.

“To me, there’s really no such thing as ‘experimental’ music, per se,” says Joel Hunt, who books concerts as The Other Side of Life and operates the venue Dreamland with his business partner, percussionist Tim Barnes. “All music that’s worth anything, in my opinion, takes some sort of risk or crosses the limitations of some sort of boundary — whether those limits are imposed by time or, sheesh, any number of other things. Context is everything.”

Barnes knows a great deal about context. Before relocating with his family to Louisville in 2007, he made a name for himself in NYC’s burgeoning free improv scene in the ’90s, primarily in and around John Zorn’s circle of collaborators. After countless years of improvising with some of the most proficient and prolific artists in this realm, Barnes still vividly recalls his first encounter with this sort of risk-taking music while attending New York’s inaugural Vision Festival for free jazz and other improvised music in 1993.

“It fundamentally altered my trajectory,” he recalls with a broad smile. “I went from listening to Sebadoh to Stockhausen overnight.”

Late last year, Barnes and Hunt saw a real opportunity when they learned that the Louisville Film Society had moved out of Dreamland, the small, pew-adorned theater behind Decca on East Market Street. Barnes began booking low-key concerts and film screenings there, and some casual talk of a partnership with Hunt quickly grew serious.

“It’s been a lot of work, with a huge learning curve and a lot of obstacles thrown in our way, probably even more than people realize,” admits Hunt. “And it’s a long way from paying for itself. But Dreamland, or at least a place like it, needs to exist in a city the size of Louisville. We’re not a small town anymore, nor are we a place that should pride itself on ignoring what the rest of the world has to offer.”

This weekend, Dreamland will host the three-day Louisville Experimental Festival, now in its fourth year of operation. Organizer Douglas Lucas saw a clear need for an annual event that focused specifically on presenting artists within experimental, improvisational, noise and related genres shortly after relocating here in 2008, and set out “to celebrate the city’s rich musical diversity as well as to help enhance it by bringing more national experimental artists to Louisville.”

This year promises to be the festival’s biggest yet, and true to Lucas’ vision, it will host a wide range of both local and world-renowned musicians. Among the out-of-towners are New York avant-garde turntablist Maria Chavez, who recently spun her carefully curated magic at MoMA, and John Wiese, the free-noise sound designer and composer whose colossal discography could fill an entire museum, representing L.A.

But those in the know are perhaps even more excited about this year’s local offerings. Astro Black Records’ owner Jim Marlowe will be improvising in a horn trio with local players Steve Good (Ut Gret, Crappy Nightmareville) and Dan Willems (The Belgian Waffles!, Sick City Four); multi-instrumentalist Joee Conroy will improvise in a trio featuring Misha Feigin and Jackie Royce, and, as with the aforementioned trio, this will be their first live performance in this arrangement. Tim Barnes is scheduled to collaborate with Arizona’s Jeph Jerman, whose live performance typically involves the manipulation of field recordings and objects found in nature — from stones to shells to driftwood.

While experimental music is often unfairly written off as pretentious, or more conceptual than musical, in practice there is little that matches the in-the-moment excitement of watching a group of musicians feed off each other’s energy and create a piece of music in front of you that can never be replicated outside of that single performance. The key, says Barnes, is to allow yourself to be open to the experience as a listener.

The same goes for the musicians, too. There’s a common misconception, Conroy notes, that improvising musicians are simply so skilled with their instruments that they’ve left the earthly realm of music behind, with only passing concerns for quaint notions like “chords” or “melodies” — call it “The Coltrane Effect.” The truth is that anyone can improvise, and the best part is, you don’t even need instruments.

Douglas Lucas, who performs under the name Mu, says his creative process is all about “turning everything on and then seeing what transpires.”

“Mu is all about improvisation,” Lucas explains. “Every recording and performance is done spontaneously. In most cases, I decide what instruments and/or non-instruments I’m going to use only a few hours beforehand; I’ve used guitars, hammers, oscillators, plastics, tape, knives, turntables, synthesizers, rocks, etc., etc. Sometimes I play with an ensemble that consists of rotating members who play various instruments such as sax, guitar, drums, electronics and so on.”

?During the LEF, Lucas will join local improvisers Norman Minogue, Mike French and Thaniel Ion Lee to play behind Steve Good, who will be giving a rare reading of his surrealist poetry. While all this talk of jazz, noise and the avant-garde may leave some people feeling out of the loop, it doesn’t take any high-minded notions or special knowledge to enjoy the adventure of watching artists tap into their deepest creative impulses right before your eyes. Joel Hunt hopes that Dreamland — and the artists who perform under its roof — will help lay that misconception to rest.

“So-called ‘experimental’ or ‘weird’ music is not something only academic types can or do enjoy,” says Hunt. “Same with film or visual art or any other type of performance art. I didn’t come from a particularly astute musical family myself, so I definitely think exposing people to what they otherwise might miss out on is a big motivating factor for making Dreamland work.”