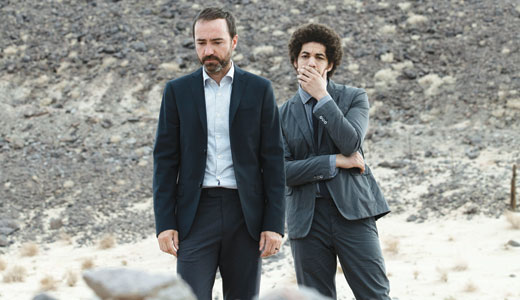 When James Mercer’s band The Shins became popular, and the songwriter and musician was finally making good money, he thought about moving to Kentucky. Lexington, no less. The Albuquerque, N.M., native was 32 at the time.

“I liked the way it looked. I liked the way it felt,” Mercer recalls. “I was in a position in my life, for the first time, that I really didn’t have to worry about getting a (day) job. It was, like, ‘You can live anywhere,’ and it felt right when I was there.”

When it’s pointed out that a college-town environment might have hindered his anonymity, Mercer laughs. “Yeah, maybe you’re right.” The well-traveled son of an Air Force officer decided instead to relocate to the musician-heavy Portland, Ore., where he already had several friends, including Louisville native Greg Brown. Shortly after the move, Brown co-directed a Shins video, “The Past and Pending.” On visits to Portland before the move, Mercer notes, “It was never raining when we came up,” which seemed like a good omen.

Since then, Mercer has also started another band, Broken Bells, with Brian Burton, aka Danger Mouse. Their fusion of organic pop and electronic, studio-based creations means their touring lineup this summer will include several instrumentalists; Burton moves around from drums to keyboards and string instruments, and Mercer is spending less time behind his guitar, adding keyboards or merely crooning. “It’s been really fun, this whole new set up, especially the visual aspects of this tour,” he says.

They’ve teamed with Luz Studios to create lights and other design elements. “They’re just such wonderful artists, really creative people … so, really, it’s on them. They designed it and we just approved it,” Mercer laughs. “It’s interesting how it changes the vibe on stage. There’s so much to look at that has nothing to do with us — it reduces the amount of pressure on you. Which is really strange to think about, but you feel more loose and free up there on stage.” He laughs again. “You know that there’s a lot of shit that has nothing to do with you. For Brian and I, our personalities, that really helps us.”

Parts of the two men want the spotlight, he agrees, but they’re not totally comfortable in it when they get it. After a decade or more of renown, how have they not yet learned how to balance their shy sides and their show-offy sides? “Man, I don’t know,” Mercer says. “I think, certain nights, it’s getting the right amount of whiskey.”

He also says he’s been surprised to learn over the past several months of touring how much better his singing comes through when he’s not also playing guitar. “It goes back to confidence — because you can concentrate on just one thing, you can do it really well; and when you do it really well, you’re bolstered by that, so now you’re confident, more comfortable on stage … so it’s really a different world,” he says. “If you’re playing an instrument and singing — at least for me, I’m self-taught, I’m not a natural at it — it’s really nice to be able to focus on one thing.”

The live show ties in to the futurist theme of their latest album, After the Disco, which has extended to their videos and even to 3-D printed models. Part of the proceeds from this tour have gone to the B612 Foundation, which — no joke — is working to keep Earth safe from asteroids.

After six hit albums with two bands, what else does he hope to accomplish? Sounding like a Woody Allen character, Mercer’s somewhat surprising answer is, “I’d like to make a really killer record … I’d like to make something I’m really proud of. I think I always end every project feeling that way, but then I feel, like, ‘Oh, I should have done more of this,’ or ‘It could have been stronger in this way or that way’ … I can’t help it, but I just look forward to the future, and the prospect of making something great, you know? I don’t know that I’ve done that yet.”

I thought you would have said something like “Astronaut,” I say. The married-with-kids rock star, now 43, laughs and says, “I think I’m more pragmatic than that.”