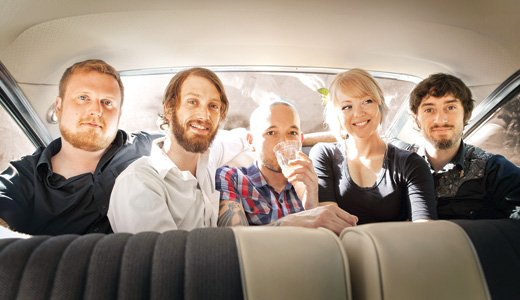 When I graduated from Louisville’s Youth Performing Arts School in 2000 and enrolled at Indiana University in Bloomington, there were two things I never could have guessed: that I’d drop out and travel the world playing electric cello with a rock band for 14 years, and that I would eventually move back to Louisville.

I worried IU was too close to home. I brought my cello, but I was so certain I wanted to be a doctor (or something) that I didn’t enroll in a single music class. My new life was going to be science … and then the world!

When I walked through the door of the house at the corner of Second and Park streets (my first college party!), the first thing that caught my eye was a guy with floppy brown hair and tight pants held together by patches. He was holding a half-gallon of liquor completely upside down and drinking deeply. With my 18-year-old brain, I thought, “Damn. That’s hot.” That guy was Adam Turla, the singer/songwriter of a rock band composed of IU students. The bandmates were all at the party that night, and I learned they were about to lose their violinist to the music school grind. I told them I would bring my cello to their next practice. And that’s how I joined Murder by Death.

On weekends, we began playing out of town. Then, in the summer of 2002, Adam booked us a tour that took us all the way out to California with a band from Chicago called Volta do Mar. I remember thinking at the time, “I have never had so much fun in my whole life.” And it was true. Ever since that first tour, I’ve been making records and touring the world with Murder by Death. For 14 years, Bloomington remained our perfect home base, with its affordable living, small-town charm and middle-of-the-map convenience. In fact, the farther we traveled, the more I found myself explaining to people all over the world what we loved about Bloomington and why our band still called it home.

People (mostly in big cities) were confused. Why didn’t we move to New York, Chicago or L.A. to “get famous”? I’m sure we lost a few opportunities by not being a New York or L.A. band. But for my money, Bloomington was the best. We came home from our first tour with little more than what would have been beer money in New York, but in Bloomington, it was enough to pay our rent. Years of touring passed like a dream. All the while, we were close enough to my Louisville family to visit. I got to see my brother Max work his way up in the Louisville restaurant scene and buy a house in the Germantown neighborhood. I got to see him start his own business, the locally famous Holy Molé Taco Truck. These things are priceless to me.

Now, the girl who was afraid she wasn’t putting enough space between herself and her hometown is moving home to Louisville. You hear about people returning to their hometowns after college, but I never thought it would be me. I was going to live in Paris or San Francisco — or on the moon. But I got spoiled by Bloomington, and I miss Louisville. Forget big-city traffic, expense, cramped quarters, lack of nature and the constant throng. Nope. I am coming home to the city where I grew up, to Louisville, a city whose charms have been revealed to me more clearly over the years through the clean window of perspective. I’m proud to bring home with me the new parts of my life I found in Indiana, my band and my husband. And I’m excited to be close to my family again, so I can meddle in their business firsthand. Look out, Max.

Murder by Death is moving home to Louisville with me, and we are playing a show at Headliners on Saturday. Come out and welcome us to our new home! This summer, we’ll also be recording with Louisville’s own Kevin Ratterman at La La Land. Farewell, Bloomington, thank you for everything! Hello, Louisville, you sweet embraceable you.