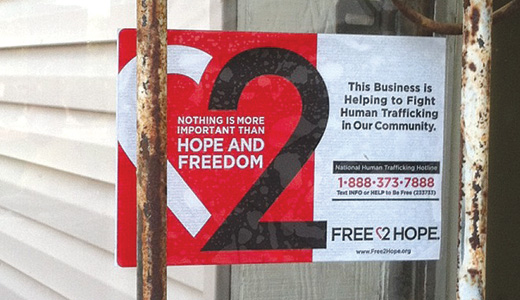 Long hours, demanding bosses, little pay. Most of us have had demoralizing jobs. In a still-struggling economy, less than ideal employment is expected, but for some among us, feeling trapped and helpless isn’t just in our minds. Last month, Louisville Metro Police arrested the owner of Golden Palace Buffet, alleging he and his wife locked employees in the basement of their home, restricting their freedom by shuttling them in a van to the Outer Loop restaurant, where they worked 12-hour shifts six days a week for no hourly wage and limited tips.

Despite this, labor trafficking is believed to be going on just as much as sex trafficking, says Sgt. Andre Bottoms, who investigates both kinds of human trafficking for LMPD, adding, “It’s just harder to find out about and harder to investigate.”

This is partially because labor trafficking is often associated with otherwise legitimate businesses. Unlike sex trafficking, where the victim is typically the center of the industry, labor trafficking often happens in the background — the nail technician whose tips are collected by her boss and never returned, the farm worker whose passport has been “confiscated” until he pays back an exorbitant amount of fees, or the line cook slinging teriyaki sauce because his family thousands of miles away has been threatened.

“It all comes down to coercion,” explains Marissa Castellanos of Catholic Charities’ Kentucky Rescue and Restore, which provides services for victims of human trafficking and assists in training others on current trafficking laws and best practices. These aren’t just individuals bending a few wage laws in order to chase the American Dream. They are enslaved through intimidation, threats and abuse.

According to police officials, last month’s arrest was the result of a yearlong investigation into the business. That’s a testament to just how difficult it can be for law enforcement to obtain the proof they need to bring up human trafficking charges. Often, the victims themselves are uncooperative. Many are foreign nationals with English language barriers and pervasive distrust of the American legal and social service systems.

When it comes to the law, Kentucky offers more protections for victims of human trafficking than most states. Before this year’s Kentucky Derby, Gov. Steve Beshear signed a law sponsored by Sen. Morgan McGarvey of Louisville allowing people to expunge non-violent offenses if said charge was a result of being a victim of human trafficking. The law goes into effect this summer. It means, among other examples, a sex trafficking victim with a prostitution or minor drug charge will now have a better chance at rebuilding their future. (Human traffickers have been known to get victims addicted to drugs in order to strengthen their power over them.)

Similarly, in 2013, the state passed “safe harbor” legislation aimed at better protecting underage victims of human trafficking from being charged and revictimized by the legal or social services systems.

Such advancements are bolstered by the once-a-year boom of the Kentucky Derby, which, like any major tourism event in other cities, results in a noticeable spike in sex workers and increased attention to the issue of sexual human trafficking. An Ohio-based nonprofit called Save Our Adolescents from Prostitution, or SOAP, has come in and distributed bars of soap with the number of the National Human Trafficking Hotline printed on them at hotels and motels where victims might see them and have the opportunity to reach out for assistance.

At the same time, this focus on sex-related crimes and the Derby may give Louisvillians a false impression that human trafficking is an issue of outsiders, one that we only have to deal with for one frantic week in May. Free2Hope, a local nonprofit founded by Amy Leenerts, hopes to change that.

Leenerts asks local businesses to place a decal with a Free2Hope logo and information about human trafficking. The idea is not to reach the victims themselves like SOAP does, but instead to increase awareness among the general public. “It sounds basic, but it’s what we need,” says Leenerts. “We need to admit it’s happening here.”

Timothy Bledsoe, a local volunteer with Shared Hope International, which also advocates and provides assistance for victims of (mostly sex) human trafficking, adds that the public outcry needs to be greater, especially on the national level. “How do we get that awareness to become public outcry?”

Many human trafficking arrests begin with someone fielding a tip to local police. According to Bottoms, four or five years ago LMPD only received a handful of tips a year. Now they receive about 10 to 20. He adds, “We are headed in the right direction. As more cases come to light, that’s going to increase even more.”

Castellanos and Kentucky Rescue and Restore recently trained LMPD officers in the updated human trafficking legislation and offered tips both on how to spot situations and how to deal with victims. Human trafficking can be difficult to spot. Some equate all prostitution and stripping with trafficking, a position many sex workers take issue with. When it comes to labor situations, the difficulty only gets muddier, but everyone agrees there are things to look out for.

“We (the consumers) are the best equipped to notice and bring attention to trafficking,” says Castellanos.

Physical signs of abuse are most obviously telling, but there may also be signs of emotional abuse, such as employees who are socially withdrawn beyond normal shyness or language barrier issues. Other red flags might include seeing employers helicopter around their tip-driven employees and take away their money periodically, or seeing numerous people work at a business from opening to closing, 12 or 13 hours a day, six days a week, as is alleged at the Golden Palace Buffet. Similarly, seeing vans transport every single employee to and from work is also unusual and worth noting.

Castellanos adds that being a conscious consumer will also help. Just as more attention is being paid to things like fair trade and sustainability in their coffee, produce and groceries, people should be aware of the places they frequent for services. “Sorry, but if it seems too good to be true … if you can have all-you-can-eat for $4.95, that business owner is making money somewhere. It could show in the quality of their products, but it could be that they’re not paying their employees.”

What it comes down to, really, is that feeling that something just doesn’t look or feel right. Leenerts believes it is better to report something that looks suspicious than turn a blind eye.

One word of caution Bottoms adds is not to assume all Chinese buffets or nail salons are guilty of trafficking. “We don’t want the public to think they can’t go to Asian restaurants. It’s not all foreigners. Most of their businesses are not involved in human trafficking. Wherever you go, keep your eyes open.”