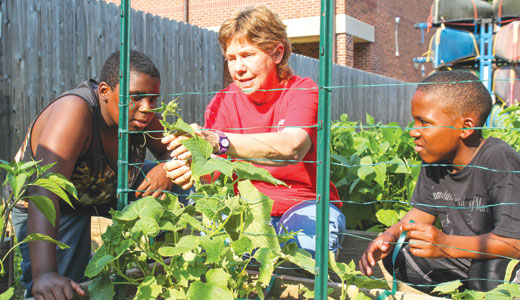 It must be the hottest day of the summer so far; the temperature shot up overnight. But even in the sweltering humidity, a group of kids is excited to be out in the garden. Except one.

He’s off by himself and seems to be feeling out of place. Volunteers mutter to each other that this is his first day at the Cabbage Patch. Ms. Leslie goes over and asks him about school and the like, and slowly starts to build his confidence. Pretty soon, he’s helping to water the corn.

The Cabbage Patch Settlement House is a nonprofit organization whose goal is to provide tools for success for kids who otherwise wouldn’t have access.

“Most of our kids would be considered ‘at-risk,’” says Jesse Hendrix-Inman, Cabbage Patch’s public relations manager. “So, at-risk for negative behavior or not achieving higher education — things like that.”

They have all the programs you would expect from a youth-based organization of its kind: homework help, tutoring, art classes, etc. But there’s one program more kids are excited about than just about any of the others.

“I can barely walk down the hall here without hearing, ‘Can I cook? Can I go cook?’” says Ms. Leslie, known outside the Patch as Leslie Ellis, the de-facto coordinator of the Seed to Table program. “Which is music to my ears.”

Seed to Table is a multi-faceted operation that, at its heart, teaches gardening and cooking skills. During the summer, the kids of the Cabbage Patch start and maintain a small vegetable garden in the back yard of the building, usually consisting of green beans, watermelon, corn, tomatoes and other such staple veggies. Then, during the school year, there are several sessions of a cooking class for the kids that incorporates many of the same flora they planted just months before.

“We want kids to understand where their food comes from … to understand what’s involved in raising different kinds of vegetables and knowing how growing your own can be easy and contribute to a much healthier lifestyle,” Ellis says.

And the kitchen-bound aspect of Seed to Table teaches kids even more universal skills. “As part of the cooking program, it’s learning to read directions,” Ellis explains. “It’s learning to get along in a small group, trying new things.”

Hendrix-Inman says the volunteers at the Cabbage Patch have “made an art out of teaching children while they think they’re playing,” and that philosophy carries over into the kitchen with the Seed to Table kids.

“We sneak a lot of math in,” says Ellis. “We’re often doubling and tripling recipes, so they learn there is a real-life application to knowing how to multiply with fractions.”

It’s a program that has seen its share of obstacles but has persevered, much like the plants its participants cultivate. The gardens they used in the first couple of years were not exactly ideal; they had to do their planting in inner-city empty lots.

“Then, around ’95 or ’96, Sloane Graff, who had been on the board here at the Patch — his family had a beautiful farm out in eastern Jefferson County,” Ellis says.

The abundant room they had to work with meant the kids could really let their gardening chops shine. They started entering their crops in the State Fair and, in some cases, took home blue ribbons.

“It was … a girl who’s now off to college who said, ‘City kids kick butt!’” Ellis recalls of a particular year’s fair.

After that farm had to be sold, they moved to a Germantown community garden and set up several plots there. But getting the kids to and from the offsite gardens remained a problem.

That has been remedied with the Cabbage Patch’s most recent renovation. “When they did the big renovation, there was a big debate about ‘Do we do a garden?’” Ellis says. “And I’m, like, ‘We were ahead of the world in doing gardens and cooking, which is all the rage now’ … I don’t want to see us stop, because we kind of led the charge in that.”

“Against all odds, this has managed to do OK,” says Lea Fishbach, another Seed volunteer and Patch board member, known as Ms. Fish to the kids.

Now that the Cabbage Patch has space in its courtyard, the gardening happens within yards of the kitchen. This makes for a much more streamlined process. “I can just grab a couple kids and say, ‘Let’s go see what’s going on in the garden,’” Ellis says of the current plot location. “And they can get the idea that even if you have a little back yard, this is what you can grow.”

That’s become an important facet of the program to Ellis. She wants the kids to know they don’t need some huge farm to be able to grow food to make a healthy, tasty dinner; all they need is some good soil at home.

“I’ve been here so long, I’m getting some of my kids’ kids,” Ellis says, laughing, about why she has stuck with Seed to Table for so long. “There’s just really good things going on here, and I want to be a little part of that.”