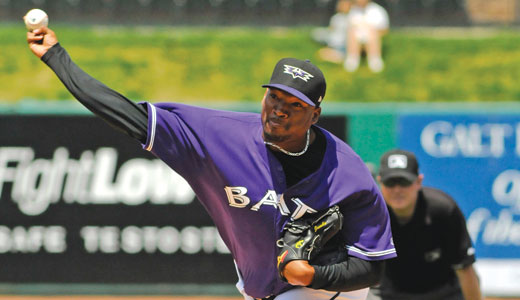 All ballplayers have a “walk-up song” for when they come to the plate to hit, or take the mound pitching. When reliever Jose “Jumbo” Diaz comes in to save a game for the Louisville Bats, the Slugger Field sound system blares “Pa Que Tu Me Saluda.” Whether opposing batters understand the fast-paced Spanish lyrics is a question. But they do get the message.

“In English,” explains Diaz, “It would mean something like ‘Don’t say hello.’ Like I say to the hitter, ‘Don’t say hello — because you won’t be around long enough to meet me.’”

And they’re usually not.

Diaz ranks second in the International League with 15 saves, a 2-2 record and a miniscule 1.63 Earned Run Average. That’s in 25 appearances — almost all coming with the game on the line, and usually in the ninth inning, with the Bats calling upon Diaz to hold the lead. In baseball, that’s the role of the “closer.” And closing a baseball game is just like closing a sale — get the deal signed, sealed and delivered. Diaz wants to settle things with hitters right now. No dilly-dallying around. Party’s over, turn out the lights.

“What I want to do is throw eight, maybe 10 pitches — that’s all,” says Diaz, a 6-foot-4 right-hander from the Dominican Republic. “Face just three batters, maybe four. I want to come in and get the job done as fast as possible. Get them out 1-2-3, and the game is over.”

“I would say, first and foremost, he never gives in. Never,” says Power. “And then, he’s got a dominating four-seam fastball, and I would say a two-seamer that has average movement, but above-average velocity. Then his split-finger change gives him three pitches that make him very tough.”

Most fans can’t see the nuances of a pitch from the stands. But we sure can see a hitter swing and miss. Or top a roller, or pop up. The pitches Power is talking about have different grips and releases that determine the flight the ball will take. The four-seamer is thrown so that after leaving the pitcher’s hand, four of the red stitches “bite” into the wind as the ball rotates, giving it a lifting ride on the air as it comes to the plate at, say, 95 miles per hour. That’s the heater. The two-seamer is also thrown hard, but Diaz instead places his fingers on opposing seams, with open leather in between, so that just two seams bite the wind, and the ball sinks — riding in on right-handed hitters.

“A tough pitch to hit,” says Power. “Especially on right-handers. When Jumbo starts it up about chest high, they think they’ve got a pitch they can drive. Then it darts down and in and jams them.”

The split-finger change? You’ll have to ask Diaz, though he probably won’t tell. “I don’t want to give up anything to anyone,” he says. “If I face my mama, my brother — when I have the ball, it is my game.”

A year ago, Jumbo Diaz fit his nickname perfectly, tipping the scales at a jumbo-sized 347 pounds. Fans loved the big fella, but he didn’t seem to be a hot prospect for the major leagues. More like a Jumbo guy dancing through his Triple-A days. Despite posting 13 saves with a 1.66 ERA for Louisville in 2013, Cincinnati did not call him up at the end of the Bats season to help in the Reds pennant drive.

So Diaz did something about it.

Over the winter, from last season to this, Diaz carved his weight from 347 to 278 pounds — shedding a whopping 69 pounds.

It was a pleasant shock for pitching coach Power. “The first time I saw him, I just saw his head above a crowd and almost didn’t recognize him. He’d lost so much weight in his face. Looked terrific.”

And just what the baseball brass hoped to see.

“He and I had a little talk at the end of the year last year,” says Power, who was a hard-throwing starting pitcher in his major league playing days. “He asked me what he needed to do. ‘How come I didn’t get called up? What more can I do? Look at my numbers.’ I said, ‘Jumbo, with you they don’t see an athlete, an athletic-looking person. The people making these decisions probably think you are not real serious about wanting to be a big league pitcher, or you’d do something about your physique.’ I said, ‘I think you need to lose a LOT of weight. And don’t pitch the ball all year. Don’t pitch winter ball this winter. This winter, give yourself some rest, come to spring training 100 percent strong. And on time.’ Two years ago he was late, he had visa problems that delayed him reporting to spring training in Arizona, and we had to kind of baby him along until he got in good shape. I said, ‘Lose weight. Come ready to compete.’ And he did it.”

Diaz, 30, says he went to work on his weight as soon as he returned home to La Romana, Dominican Republic, last fall.

“I go to see the doctor in the Dominican, and a nutritionist, and start eating healthy,” Diaz recalls. “They change the way I eat. I start to lose weight so quick, many people think, ‘Are you sick or what?’ Everybody say if you lose weight so fast, you lose your velocity. But I got my velocity and I am feeling so good. At spring training, they say, ‘Where is Jumbo?’ I say, ‘I left Jumbo at home.’”

Recently, his wife, Anny Escorborg de Diaz, gave birth to the couple’s first child, Jose Alejandro. The club sent Diaz home for a few days, and the players all signed a baseball for his son. “He is a big boy,” says the proud papa. “52 centimeters, 9½ pounds. Little Jumbo.”

Louisville opens an eight-game home stand Wednesday night, with four games each with Gwinnett and Durham — with the league’s three top closers involved. Durham’s Kirby Yates has 16 saves, 0.36 ERA, and has given up just one run this season. Diaz has 15 saves, and Gwinnett’s Juan Jaime has 11.

But don’t leave early, or you won’t see any of them. Managers save their closers for last, and the best ones like it like that.

“Everybody is waiting for the last three outs: boom-boom-boom,” says Diaz. “Up here they say the team trusts you when you are the closer. They say, ‘We’ve got the lead, and we got Jumbo for the save.’”

On the mound, Diaz takes a couple of warm-up tosses, then turns to survey the situation on the base paths as the hitter steps in. It is no time to be humble.

“Yeah, when I’m going in, I think there is nobody better than me — that is what I have on my mind,” says Diaz. “I know I face some good hitters. They want to hit on me. If the guy gets a hit, that’s OK, because they got a bat.

“But I want to be in there if the game is win or lose. Sometimes I got the bases loaded and I got to get out of a jam. Sometimes they go out 1-2-3. But if I lose a run, I lose the game. I say in my mind, nobody is better than me. I got the ball and I got this guy out.”