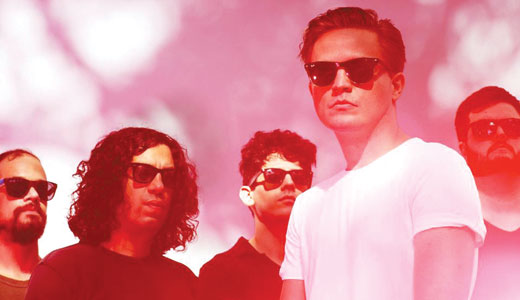 Signing with British record label 4AD was just one of several paradigm-shifting decisions recently made by Tampa, Fla., indie rockers Merchandise, who also picked up two new permanent members in the time since last year’s LP Totale Nite. But the band hasn’t lost sight of its DIY sensibilities in the process of making their third full-length, After the End, which guitarist Dave Vassalotti says is their most intentionally straightforward pop record to date.

“Home recording is all we really know,” admits Vassalotti, who is part of the core founding trio that also includes singer Carson Cox and bassist Patrick Brady. “Even though we’re on a reputable label and have a budget for the first time ever, we could never have made this record in a real studio. All the hours of recording, re-recording, cutting, arranging … it would have cost a million dollars. It took a continuous six months to complete. We work best at our own pace.”

The band also seems to work best in close quarters. All five members, including new additions Elsner Nino on drums and Chris Horn on saxophone, also live together. “It seems insane,” remarks Vassalotti, “but somehow it works.” Now that the band is successful enough that its members don’t have to work side jobs anymore, they’ve got plenty of time to indulge in home recording experiments. Cox takes the lead as producer.

“We recorded After the End in Carson’s bedroom and closet,” says Vassalotti. “Nothing fancy. His knowledge as a producer has grown considerably since we started as a band. You can hear it get better on each record. After the End is definitely the ‘cleanest’ and most ‘pro’ sounding recording we’ve made yet, but it still maintains a certain rawness.”

All of those characteristics are on full display in lead single “Little Killer,” especially in the faux-glossy, deliberately sloppy music video, directed by Cox. Yet the musical style has been boiled down to its essential elements, with the cavernous space found on previous records walled off in order to pack in the endlessly pleasurable pop hooks that much more tightly.

Stylistically speaking, however, the band has no intention of burning bridges, as is evident on “Begging for Your Life/In the City Light,” their introductory 12-inch release for 4AD earlier this year. The sprawling, 12-minute jam, built around an afternoon improv session recorded while “under a heavy hashish spell,” was originally created for a limited-run split cassette with Chelsea Light Moving, Thurston Moore’s post-Sonic Youth project.

“‘Begging’ is probably my favorite song of ours,” says Vassalotti. “I’d love to do more pieces like that in the future. We’ve had our share of long songs in the past, and since we wrote After the End to be some sort of a ‘pop’ record, doing that 12-inch temporarily satisfied the itch for extended long-form jams.”

Cox, Brady and Vassalotti worked as a trio for several years before bringing Elsner and Horn on board, and earlier tours made heavy use of drum machines and pre-recorded loops to make up for the personnel gaps. While some fans may lament the loss of that humbler lo-fi aesthetic, the band couldn’t be happier with this new, more organic approach to live performance.

“Playing with a human drummer feels so much better than playing to samplers and drum machines,” Vassalotti admits, while noting that “studio Merch and live Merch have always been two different beasts. The dynamics have changed mostly in the live realm.”

“We never spent too much time reimagining the old material,” he continues, “but now that we’ve played those songs so many times, we’re trying to change things up a bit for the sake of our own sanity. Chris, our newest member, is playing rhythm guitar and keyboards live now. The songs are starting to fill out in a real nice way. I’d really love to do a live record one of these days …”

With seven months off since Merchandise’s last lengthy tour, Vassalotti says he has become “a bit stir-crazy. I enjoy the comforts of home life — I have a girlfriend and a massive wall of records to keep me company — but travel and exploration are important and necessary.”

But no matter how far the group ventures from their local scene in Florida, they’ll always be working-class punks trying to forge meaningful connections by way of their beautifully messy art-pop.