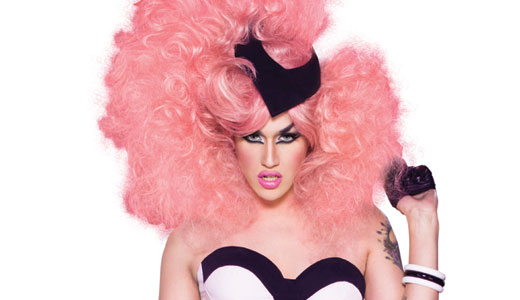 The past decade of reality TV has seen some highs and some very low lows, and Danny Noriega has seen it all. First achieving notice in 2008 as an “American Idol” semi-finalist, his sassy teen attitude made him a regular punchline for Joel McHale on “The Soup.” After a brief phase as YouTube personality Angel Baby, the singer, now 24, has become better known and more beloved as drag queen Adore Delano, a runner-up on the recent season of “RuPaul’s Drag Race.”

“They still say, ‘Angel Baby’ and ‘YouTube’ and stuff like that, but it’s mostly ‘Adore,’” when he encounters fans these days. “Like, I had kids in Party City the other day that were crying, and I was so uncomfortable and scared. Like, it was so awesome these 13-year-old little girls were excited to meet Adore. What the fuck?” laughs Noriega.

The mother-loving native of Azusa, Calif., has been on the road lately, satiating Adore fans with nightclub gigs like next week’s stop at Play. Life on tour has been an adjustment for the surprisingly reclusive queen known for shouting out “Party!” in any situation. “I do love to party and I love being around crowds, but when I’m not working, I just wanna be by myself, with a fucking box of pizza, and that’s my party time,” he says. “I love my alone time.”

His current persona was born after seeing earlier “Drag Race” contestant Raven perform at a West Hollywood club three years ago. After performing at various southern California clubs, including a stint hosting a weekly Friday night show called “Sour Puss,” Adore Delano finally made it back onto the hot reality competition series of the moment. While seeming unlikely to win at first, for a handful of reasons including an inability to sew, Adore finally got on track, impressing the judges and fans with other skills — including singing, rapping and comedy — and an unexpectedly charming side.

Though not the winner, Adore has made the most of the experience for Noriega: In addition to finally making good money touring, an Adore Delano album — Till Death Do Us Party — was released last week, featuring sure-to-be hits like “DTF,” “I Look Fuckin’ Cool” and “Party.” Sewing is an art not yet mastered, though, he says: “No, but I got a fuckin’ bomb-ass glue gun!”

Adore also gets to inspire those 13-year-olds, living as the kind of role model he didn’t have a decade ago. “When I was 12, I looked up to Marilyn Manson, shit like that. I loved him. I loved people that pushed boundaries, like Anna Nicole Smith and Freddie Mercury, people like that. I wasn’t really, like, ‘Ooh, Good Charlotte!,’ or the bands that were popular … I was more focused on kind of what people made history in pop culture, for different reasons — like, why people were so attracted to Queen in the ’80s and why Freddie Mercury was a fucking lyrical genius. I was clearly obsessed with him when I was a kid, and I love Marilyn Manson so much.”

He has a theory on why young kids can look up to him and other queens. “They’re powerful, they’re fun, they’re almost like double personality superhero anime characters. That’s the awesome thing about (“RuPaul’s Drag Race”), though, is they’re putting drag in a different light, kind of pushing it almost mainstream.”

Fans don’t see everything that happens on set, though. He says his friend Laganja Estranja’s epic meltdown was even more epic, and that viewers only got to see a snippet of what went on for hours. It happened, he says, because the queen decided to change her persona shortly before filming began, becoming unfocused and confusing the producers who had cast her for what they had seen in the clubs. “If you don’t go into the competition with a fully developed character, you are completely fucked,” says Noriega. “She wasn’t aware that it was coming off phony bologna because she hadn’t done it for a while.”

Adore Delano isn’t much different than Danny Noriega, and that authenticity got her — and him — this far. The Louisville appearance will be “a fucking party,” because he likes the flyover states. “I feel like there’s a different appreciation of drag and I … do you guys have Whataburger? Oh, fuck, man, it’s so good.”