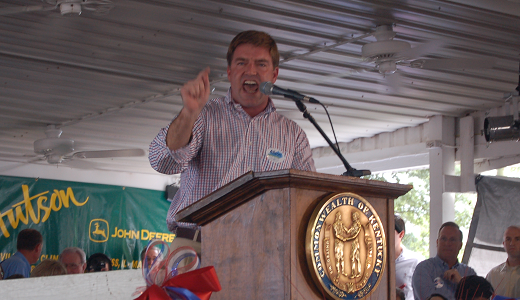 Dennis McGuire struggled, gasped and choked for nearly 10 minutes after receiving a lethal injection in Ohio this January, before eventually dying. In Oklahoma in April, Clayton Lockett grunted, writhed and clenched his teeth more than 10 minutes after his lethal injection, before his execution was abruptly aborted. After an attempt to revive him, Lockett died of a massive heart attack.

These two executions have touched off a renewed debate over the death penalty system in America, and defense attorneys in Kentucky are now arguing that the state’s lethal injection protocol violates not just the Eighth Amendment against cruel and unusual punishment, but the First and Sixth amendments as well, due to the secrecy surrounding how the procedure is to be implemented in Kentucky.

A 2010 injunction by Franklin Circuit Judge Phillip Shepherd temporarily banned executions in Kentucky over concerns that its three-drug cocktail used in lethal injections caused an unacceptable amount of pain and suffering. In 2012, Kentucky changed to a one- or two-drug protocol including the sedative midazolam and the powerful painkiller hydromorphone — the same two drugs used by Ohio in the McGuire execution.

David Barron, an assistant state public advocate, is currently representing six death row inmates in a case against the state of Kentucky, arguing that its current lethal injection protocols violate the Constitution. Barron’s motions in the case attempt to pull in the examples from the Ohio and Oklahoma executions to show Kentucky’s protocols do not safeguard an inmate from great pain during an execution and aren’t backed by research on its effects.

Barron notes that the amount of midazolam Kentucky would use in lethal injections is the same as what Ohio used in the McGuire execution. Ohio later increased their execution dosage of midazolam from 10 mg to 50 mg, and Florida’s is currently 500 mg.

“They’re remaining deliberately indifferent to avoid learning information that could force their hand into making changes,” says Barron. “Right now there should be absolutely no doubt that there are significant issues with the usage of the one- and the two-drug protocol, and there is no legitimate reason for failing to increase the dosage of the protocol at least to as much as Ohio.”

Barron says that motions from Attorney General Jack Conway’s office reveal that their current protocol has not been vetted or studied (Ohio was the first to use this two-drug cocktail), and even admit that pain is not avoided during executions.

“When we pointed out the drugs caused suffocation and air hunger — which would be extremely painful and akin to the feeling of drowning — they actually responded in the pleading that the drugs are intended to cause air hunger,” says Barron. “To me, that’s pretty much an admission that they’re injecting drugs for the purpose of violating the Eighth Amendment.”

When asked a series of questions on this matter, Conway’s spokesperson referred LEO to their briefs filed in the case. Among their pleadings was an argument that inmates are not entitled to a painless death — noting their victims did not have a choice on a pain-free death — and the state is not obligated to discover a method that is free from discomfort.

According to a May story from WDRB, the lawyers for Ellen Crawley, accused of killing her grandmother, are currently using the Ohio execution in their case in Jefferson Circuit Court, arguing she and the jurors must be informed of how specifically she would be executed if given the death penalty. There are currently 33 death row inmates in Kentucky, which has not executed an inmate since 2008 and only three in the past 40 years.

Kentucky admits they currently have no drugs in stock to perform a lethal injection, which are now difficult to obtain legally due to pharmaceutical manufacturers insisting that their product not be used in executions. The DEA confiscated illegally obtained drugs from the state in 2010, and many states, including Kentucky, have considered an attempt to find black-market drugs to perform executions. Citing this difficulty, Tennessee recently decided to switch back to using the electric chair.

Barron notes that the insertion of the IV in Kentucky’s lethal injection protocol also raises constitutional questions. While the botched execution in Oklahoma was originally blamed on a blown vein, an autopsy concluded that the IV was not inserted properly, which took a total of 51 minutes to complete. Barron says Kentucky’s protocol allows up to 60 minutes to insert an IV and doesn’t give any provision allowing stoppage during that time. Doctors are also barred from participating in this process in Kentucky, increasing the chance of error.

Based on these circumstances, Barron argues that legal counsel and the media should be allowed to view the IV insertion process, which is allowed in other states directly or by a closed-circuit camera. Kentucky does not allow this to occur — saying it is not part of the execution — but Barron counters that the First and Sixth amendments require this.

“The 9th Circuit Court has ruled twice that there’s a First Amendment right to see it,” says Barron. “So we’re trying to force them to change their procedures so that the viewing curtains are open, so we can see what’s going on in case something pops up during the insertion of the IV, and if we need to try to get a hold of the governor to grant a reprieve or the court to intervene.”

A recent national poll in the wake of the botched Oklahoma execution found that support for the death penalty remains high at 61 percent, though if given a choice, 52 percent chose life in prison as a preferred punishment to the death penalty, which received 42 percent support. Six states have stopped using the death penalty in the last six years.

Last year, after the American Bar Association called for Kentucky to end its “broken” death penalty system, a poll of Kentuckians found support for the death penalty at 67 percent. This year, a bill in both chambers of Kentucky’s General Assembly to ban the death penalty picked up the sponsorship of two House Republicans, but it did not receive any committee hearings.