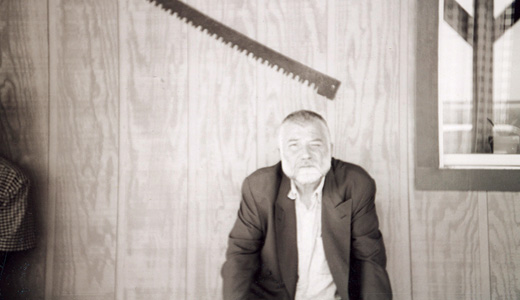 Peter Brötzmann, 73, is a force of nature. His high-energy saxophone and clarinet work has been a mainstay of European improvisational music, and ultimately of free jazz throughout the world, since the late 1960s. His 1968 album Machine Gun is a cornerstone of many free-jazz collections, and his discography is remarkably vast. Louisville will have a rare opportunity to hear non-mainstream jazz by this groundbreaking German musician in collaboration with two longtime American collaborators, Chicago drummer Hamid Drake and New York bassist William Parker, in what Brötzmann’s site refers to as The Classic Trio. Brötzmann has toured and recorded as a solo artist and as leader and member of duos, trios and large ensembles (including his Chicago Tentet and the Globe Unity Orchestra). Brötzmann spoke with LEO from his home in Wuppertal, Germany.

Brötzmann met Drake and Parker separately and introduced them, saying he now considers them friends, not just colleagues. They have participated in many ensembles with Brötzmann, not only in trio format, but also in a foursome with trumpeter Toshinori Kondo, sometimes referred to as the Die Like a Dog Quartet (from the title of an album in homage to Albert Ayler’s music).

Brötzmann offers both practical and aesthetic perspectives for touring with just Drake and Parker. “One of the reasons is economic. It’s nearly impossible to keep a large band going. The other thing is, in my more than 50 years, I always had small groups, mostly trios. The trio is very intimate, the place where you can develop your ideas more directly, find out new ways to express yourself and find out what’s possible.”

Conspicuous in its absence from the bandstand will be sheet music. “The music of this trio will be the music of the moment. We develop our language in a way that everybody has his own voice. We are able to listen to each other — I don’t think we need written music.”

As a child, Brötzmann was interested in visual art and attended the Art Academy of Wuppertal. He began playing clarinet, and as depicted in the documentary film “Soldier of the Road: A Portrait of Peter Brötzmann,” he soon began playing with Dixieland bands, learning swing and bebop along the way, essentially teaching himself. To this day, Brötzmann continues to produce paintings and other artwork; many of his album covers feature his art. Asked if he feels a connection between his visual and musical arts, he responds, “The connection is the same guy is doing it — the guy with the same feelings. The difference is that making music is mostly together with somebody, a different and interesting side. Here in my studio, I’m alone. If I’m not satisfied with what I’ve done, I can throw it in the garbage. With music, you do it and you can’t take it back. Music is risky business.”

The risks Brötzmann takes can stir up controversy. A quick perusal of some of his music posted on YouTube leads to posted comments from “brilliant” to “What the fuck is this shit?” Take the risk yourself if you have even a passing interest in adventurous, in-the-moment, take-no-prisoners music.