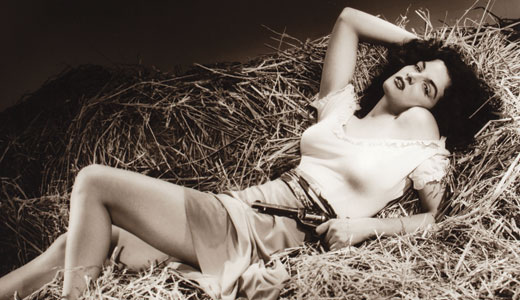 It’s rare that my visual arts side crosses paths with my interest in classic film history, but “Stars of the Silver Screen: Through the Lens of George Hurrell” lets me indulge in both. The exhibition features a selection of Hurrell’s gelatin silver prints of 1930s-40s movie stars.

Hurrell (1904-92) was the movie studio photographer, known for his style of high-contrast, soft-focus black-and-white portraiture that became known as glamour photography. He got his start at MGM Studios thanks to actress Norma Shearer.

In the book “Complicated Women,” Mick LaSalle writes about how Shearer changed from an ingénue to a screen siren by way of Hurrell’s portraits. Shearer wanted to play the lead in “The Divorcee” but was told she wasn’t glamorous enough. She went to the young and unknown Hurrell with a specific plan, and their collaboration, as well as his career, was launched. Hurrell shot Shearer in a series of poses, sexy enough to get her the role in the film that later won her an Academy Award for Best Actress. For his part, Hurrell became head of the MGM portrait photography department. He later worked for Warner Bros. Studios and Columbia Pictures.

While Shearer is not in the exhibition, her nemesis Joan Crawford is. Many words have been used to describe Crawford, with “tough” leading the way. LaSalle is not a Crawford fan. “Even in still pictures,” he writes, “her hardness has a velocity to it. In the many portraits she made with photographer George Hurrell, she looks like a woman trying to stare down time. In 70 years, she hasn’t blinked.” Yet the Hurrell 1932 image in the show is one of the loveliest photographs of Crawford I’ve seen. He made her softer — even if it’s just by a little.

Jane Russell’s introduction to the public came by way of the Western film “The Outlaw.” The studio marketed her as the latest sex symbol, even announcing that Howard Hughes had designed a new bra that gave her breasts optimal lift (although she said she didn’t wear it because it was too uncomfortable). Hurrell’s 1946 portrait of her sultrily stretched out on a bale of hay with her gun provocatively resting on her hip continues the sexual theme.

Men got the Hurrell treatment, too. His Johnny Weissmuller portrait from 1932 looks like he should look. Perhaps the quintessential “Tarzan,” you expect the former Olympian athlete to be bare-chested, and he is. But it’s not just beefcake, as Weissmuller looks more contemplative than you expect him to be.

It may be Hurrell’s portrait of Anna May Wong that removes all doubt why these images were taken. The beautiful Chinese-American actress goes full on sexy. She poses with her head tilted, eyes lowered and wearing clothing that just can’t stay on, revealing most of her breast with just a hint of nipple. In 1938.

Sex sells, and Hurrell made it look so good.

‘Stars of the Silver Screen: Through the Lens of George Hurrell’
Through June 30
Paul Paletti Gallery
713 E. Market St. • 589-9254
paulpalettigallery.com