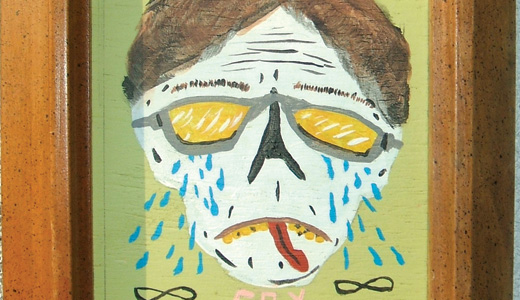 Patrick Jilbert moved from Louisville to Santa Cruz, Calif., a few years ago for a job at Consolidated Skateboards. He met a fellow artist while out West, Sid Enck Jr. The pair became fast friends and remained in each other’s lives even after Jilbert moved back to Louisville.

Enck has visited Louisville twice since, so while organizing an art tour for this summer, showing alongside his friend made Jilbert’s city a perfect stop. It’s their first proper show together.

“We both got into art because of skateboarding, and we both started off making really morbid art,” Jilbert says. “As time progressed, I got more into language-inspired work, and he has moved into Native American-inspired work. But we are still able to collaborate on things together well somehow.”

Enck, “passionate for creating and driven to share,” has shown often in California, but this time he’s traveling across the country showing at a variety of venues with different partners in each location. Louisville is the first stop, to be followed by Macon, Ga., and Chicago. Jilbert rejoins the show in Chicago. The intention of the tour, they say, is “to get their creations noticed beyond the boundaries of their local area and to promote the talent of other phenomenal artists.” Enck will be chronicling the adventures online at fromcanvastocountry.tumblr.com.

While the tour is a big leap forward for Enck, he has already spent time traveling, fueling his art with inspiration found primarily from two sources: American Indian culture and found objects. His mixed-media work often blurs lines between the two, mixing animal bones, vintage clothing parts, black-and-white photos and new, hand-drawn or cut details. One important connecting theme is using recycling creatively, honoring every part that might help complete a new creation. Enck notes that he takes “great pride” in using recycled materials that are all American made, adding that showing the importance of sustainability is an important part of his process.

Trained as a woodworker and craftsman, and also experienced as a photographer, Enck mostly paints directly on hand-cut wood, putting a lot of sweat into his already complicated pieces. Cutting, sanding, printing and painting is only the beginning, as some works then require further detailing and ornamentation. It’s a kind of labor often lacking in art assemblage, but making the viewer see how much work and attention to detail has gone into each inch is perhaps the main point Enck wants to make — to pay attention, to not take this planet for granted.

If Enck’s work is based in the natural world, Jilbert’s is seemingly in contrast, as his very modern, urban perspective is influenced by city life, primarily its slang and music. Self-taught, Jilbert has already served as an artist-in-residence at the Kentucky Museum of Art and Craft, and spreads his street style through paintings, posters and shirts. What the pair share is a love for documenting the effects of industrialization — native culture affected by the material world, and the detritus created by that collision. Both have preserved cultural moments that will keep that energy alive, even after its time has passed.

An opening reception will be held Saturday, June 7, from 5-9 p.m. at Ultra Pop.