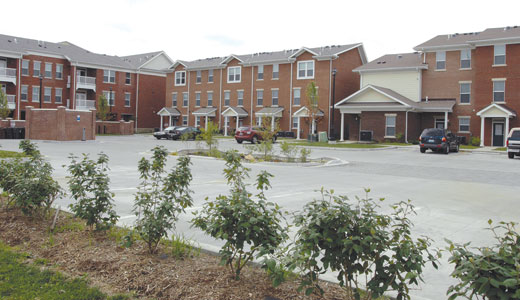 Pick yourself up by your bootstraps and get to work, you lazy poor black women. That’s how local housing advocates are interpreting the underlying message of a Housing and Urban Development-sponsored study being considered by the Louisville Metro Housing Authority that could make it more difficult for the poorest of the poor among us to afford low-income housing and adequate childcare.

The study — entitled the Housing Choice Voucher Rent Reform Study — would modify policies and rent calculations for a group of 1,000 randomly selected participants and compare the results to a control group operating under current policies and procedures. Those chosen for the study cannot opt out. Among the major modifications for them: determining the percentage of Section 8 rent you pay based on your gross income rather than an adjusted gross income that factors in things like childcare and medical expenses, and instilling a minimum rent payment. This would impact the majority of participating individuals, as 93.3 percent of households in LMHA receive at least one deduction.

Currently, someone with no income pays 30 percent of zero, meaning zero. A program participant would not have that luxury and be required to pay $75 unless they received a hardship waiver.

While that change might seem insignificant to the majority of the city’s residents, there exist individuals and families for whom $75 a month is a burden, says Cathy Hinko, the executive director of Metropolitan Housing Coalition, one of the advocacy groups expressing concern over the proposed study. The study exempts from participation the elderly, disabled and individuals enrolled in various preexisting housing programs. However, “we have people who are not declared disabled, or not considered elderly, who aren’t functioning enough to be able to earn $75 a month,” says Hinko.

According to Sarah Laster of LMHA, the hardship waivers will protect the people Hinko is concerned about. “There are a number of safeguards in place to help people who are cost burdened,” says Laster.

Further grinding advocates’ gears is the lack of consistency in minimum rent requirements among the four housing authorities — Louisville, Lexington, Washington, D.C., and San Antonio — that have signed on to participate in the rent reform study. Adds Hinko, “They said one of the places is doing $150. There’s no internal consistency. So they said $75. Seriously? You are going to impose this on people and it’s as casual as ‘I made it up and I can change it because it’s not based on anything except what I ate for breakfast and prejudices.’”

Whatever its inspiration, this minimum rent requirement could force working parents to rethink their current childcare options and downgrade — possibly to something cheaper but less safe. “We’re very concerned that this policy, even on its face, does not support licensed childcare,” says Hinko. “It doesn’t even pretend to be concerned about where they’re putting their children.”

According to the study’s introduction, the goal of the alternative rent policy is to “create a stronger financial incentive for tenants to work and advance toward self-sufficiency.” Hinko and groups like Louisville Showing Up For Racial Justice see in that statement a built-in assumption that the Section 8 people it targets are actively choosing not to work. While that’s a popular talking point for many ultra-conservatives, according to the Center on Budget and Policy Priorities, studies have found that most housing voucher households that can be reasonably expected to work do work.

Seventy-one percent of housing voucher recipients are African-American. If you exclude the elderly and the disabled, as the proposed study will, that percentage is even higher. This disproportionate number of single black women with children in low-income housing has been well documented, including in the Metropolitan Housing Coalition’s most recent annual report.

If Hinko seems incensed, she is.

Cate Fosl doesn’t blame her. The director of the Anne Braden Institute for Social Justice Research at the University of Louisville is an academic and historian who has written about race and housing policy, including as lead researcher on the city’s 20-year fair housing action plan. “American history teaches us there are dangers to this sort of human experiment,” says Fosl.

She is talking about things like the infamous Tuskegee experiments or cases in the 1990s where young black women were aggressively pressured by judges and other authorities to take Norplant, a birth control implant.

“Housing vouchers are obviously not as intimate as placing devices in people’s bodies,” says Fosl, “but the general analogy stems from the greater likelihood of negative impact of policy experiments on black mothers given our difficult history of denigrating black motherhood, which may include negative stereotypes such as the ‘welfare queen.’”

On their end, Housing Authority says the study isn’t intentionally singling out single black women with children. It’s just a reality of the numbers utilizing Section 8, says executive director Tim Barry. “Make no mistake, the questions and concerns are legitimate. This is a demonstration program, and we have to see what works. Concerns about minimum rent, childcare are legitimate.”

Barry adds that rent reform is a national trend. Though only three other housing authorities have signed onto this particular study, many more are experimenting in other ways to figure out what works best. “We’re not going about this solo. We’re trying to stretch the dollar and provide more services with less money.”

Not every element of the proposed study is being opposed. Hinko acknowledges strong points, including the plan to require recertification of individuals every three years instead of annually, as is the process now. Similarly, she concedes that the current process for calculating utility costs is complex and possibly outmoded.

“There is a lot we object to,” she says, before adding, “but there doesn’t appear to be any reason why they can’t keep the good part and kick out the bad part.”

Adds Laster, “These are the types of conversations we can have locally.”

Louisville Metro Housing Authority will hold a public hearing at 6 p.m. Thursday at Avenue Plaza, 420 S. Eighth St., to discuss and receive comments on the current draft of the proposed rent reform study, as well as on their overall Moving to Work annual plan. The mandatory commenting period ends July 13, after which the Housing Authority could approve the study. The full proposal can be found online at lmha1.org.