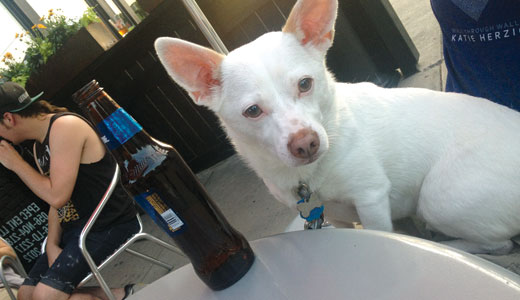 So here’s the scenario: You’re out to dinner with a friend. A human friend. The two of you are eating, having a drink or two and discussing current events like the World Cup or politics or J. Lo’s new boyfriend.

This friend isn’t your favorite. You’re hating every minute of it, actually: his dumb clothes, his opposable thumbs, his bipedalism. You find yourself wishing you could just have a meal with a species that doesn’t have so many annoying opinions on indie music or online dating. One that doesn’t insist on ordering their burger without pickles like a lunatic. You wish you were eating with a dog.

Although Louisville still has leaps and bounds to go before it catches up with dog-friendly cities like Portland and Austin, dining out with your furry best friend is easier than ever. Most restaurants and bars around town allow canine companions on their patios, for sidewalk seating and, in some cases, even inside the establishment (if food isn’t served).

One such dog-friendly destination is Apocalypse Brew Works (1612 Mellwood Ave.) in Clifton. They not only let patrons bring their dogs to the outdoor area but also allow them inside to the bar as well.

“Dogs get better treatment than some of the people here,” jokes Apocalypse co-owner Leah Dienes. “We’re dog-friendly. Who doesn’t want to go have a beer with their four-legged best friend?”

The bar does plenty to bring in furry visitors. Dienes says they often use the spent grain from brewing to make dog cookies. They also hold events throughout the year that are dog-oriented: During Louisville Craft Beer Week, Apocalypse hosts its Yappy Hour, a day when all proceeds go to the Kentucky Humane Society.

If you’re wondering why dogs can hang out basically anywhere on the premises, it’s because Apocalypse is just a bar with no restaurant or kitchen component. There are more regulations when food enters the equation, and restaurant owners often exhibit more caution when dealing with dogs on their property.

“As well-behaved as they may be, (when) you’re waving a cheeseburger in front of them, you don’t know what they might do,” says Tommy Clemons of the Highlands Tap Room and Grill (1058 Bardstown Road).

The Tap Room has been on both sides of the dog issue. When they first opened, they allowed dogs in the outdoor patio area. However, after several incidents of canine misbehavior (one dog snapping at a customer and another urinating on a patron), they decided to enact a ban.

“Most people understand. It’s just a liability issue for us, and for the dog, too,” says Clemons.

There’s good news, however, for Tap Room regulars with dogs: Now that they have relocated the original Highlands Tap Room next door, the bar is once again allowing German shepherds, chihuahuas and the like on that half’s patio.

Also in the partial-ban camp is Flanagan’s Ale House (934 Baxter Ave.). Similarly to the Tap Room, they have differing rules about dogs on their two patios.

“We allow dogs on our side patio out on the sidewalk, but we no longer allow dogs out back,” says general manager Matt Meehan. “There was a slight incident last summer with a child — a dog snapped at the child.”

In most cases, a simple call to the bar or restaurant to inquire about their dog policy should save you any hurt feelings. As excited as Fido is to go for a car ride and join you for a beer, you’d hate to grab a seat underneath an umbrella only to be told dogs aren’t welcome.

“My dog, Blanco, is a regular at the Nachbar all year ’round, and we go to the Barret Bar frequently, as soon as the weather permits,” says Germantown resident Steph Jordan. “As for places to dine, we like to frequent El Mundo, where dogs are welcome on the sidewalk only, and we plan on going to Zanzabar soon, since I just found out you can bring your dog to their enclosed patio.

“I don’t mind going out to places alone, but having Blanco with me changes the dynamic. It’s like an instant ice-breaker.”

The choices in Louisville for al fresco dining with your dog are vast, but it’s clear that these allowances could easily be rescinded without proper control of the situation. According to the restraint section of Louisville’s animal ordinance, in places that consent to allowing dogs on their premises, said dogs must be under direct control by their owners.

In other words, Louisville has a leash law, and disobeying it could lead to more bars and restaurants closing their doggy doors.

But with establishments like Apocalypse still churning along and dedicated to their canine cause, there’s no reason to believe Louisville will become any less dog-friendly.