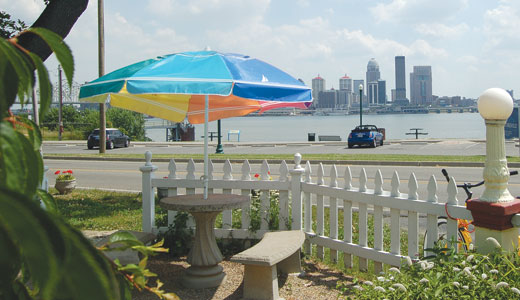 I was on a mission. And it involved Southern Indiana. I wanted to find the best al fresco dining spot to behold the Louisville skyline. Where can I find a snack, a comfortable chair and a great view of my city?

I headed across the mighty Ohio with a few dollars in my pocket and the LEO camera. It was a humid Thursday afternoon, so hot that I was bothered. My first stop was Rocky’s Sub Pub in Jeffersonville, just a quick right off the Second Street Bridge. The patio was expansive and clean but empty. Did I mention the sticky heat? Most of the lunch crowd opted to stay indoors, and I don’t blame them.

While the view from the Rocky’s patio is a nice one of the river and some of Waterfront Park, the skyline was obscured by that pesky Second Street Bridge. Still, if you’re in the mood for some spaghetti and unlimited salad and breadsticks, I can see the Rocky’s patio being a nice place to chill and watch the barges narrowly miss taking out a bridge or two.

I headed down Riverside Drive toward the Big Four Bridge, and that’s where I spotted Cluckers. I spent a lot of time in that building when it was called Jimmy’s Bar & Grill, and I remember the view of Louisville being exquisite. When I entered, the waft of wing sauce immediately made me salivate, and I nearly forgot my mission. I took a pitstop at the bar and refueled with a pint of Miller Lite and an order of Hot & Sassy Garlic boneless wings. Hey, this was hard work. The large nuggets of white-breast chicken were delicious, and I savored the tangy yet spicy sauce. I wish I had ordered more, but time was ticking.

I made my way upstairs, which was not technically open during lunch, but I had explained my quest to the friendly bartender, and she just said, “Make yourself at home.” I found myself unsupervised with a fully stocked bar — the thought to truly make myself at home by pouring a stiff drink crossed my mind — but I behaved myself. I was on the cluck, err, clock.

Anyway, the Cluckers upstairs patio is now enclosed, but it offers a great view of the pedestrian bridge. The skyline, however, is now blocked by two bridges and lots of construction. Cluckers also has an outdoor patio off the first floor, but again, you’re just taking in the Ohio and the folks walking over it. Which is nice in its own right, but not why I was braving the afternoon heat.

Finally, I decided to take Riverside Drive back toward Rocky’s, past the Second Street Bridge and on into a whole new city. It was only a block or two from Rocky’s, but apparently I crossed into Clarksville. Who knew? That’s where I found the Widow’s Walk Ice Creamery, an oasis for my taste buds on a day when temperatures rose above 90. I ordered a scoop of mocha almond fudge, turned around to find a place to sit and nearly lost my balance when I glimpsed the post-card view of the Louisville skyline. I found it! No bridge in the crosshairs. The river flowing breezily along.

Widow’s Walk has a few tables scattered around, and they also have a thriving bike rental business if you feel like cruising about the sleepy Southern Indiana towns on two wheels. There’s also a park a stone’s throw away where you can get even closer to the edge of the river, the Louisville skyline becoming even more in focus.

I took a seat on one of the park benches and admired the view. It didn’t matter that I was sweating my imaginary balls off. I just ate my ice cream and stared off into the horizon. This would be a great place to bring a date. Or bring my mom. Or just bring myself when I need a little afternoon delight — and not in the Starland Vocal Band sorta way. Pervs.