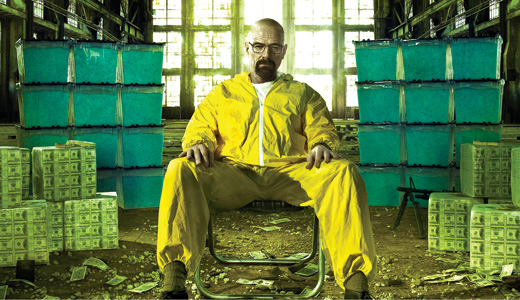 It would be an insult to our readers to review any aspect of this amazing, genre-busting cable-TV drama about high school chemistry teacher Bryan Cranston, who discovers he has lung cancer and turns to cooking meth to provide for himself and his family. One of the most popular cable series in history, all 62 episodes and a plethora of unseen special features, now available on 21 DVDs or 16 Blu-rays. Pace yourself, bitch.

This unnecessary re-imagining of Paul Verhoeven’s masterpiece about a murdered cop in a brutal future being resurrected against his will as a half-human cyborg lacks the original’s dark comedy, charisma or damning — if prescient — take on the fall of consumer society, but it does have Gary Oldman, Michael “Batman” Keaton, Jackie Earle “Rorschach” Haley, Samuel L. Jackson and Abbie “Suckerpunch” Cornish. Joel Kinnaman puts on the suit and, in a departure from previous versions, remembers his past life, suffering greatly the loss of his humanity.

To be honest, we had never heard of this show, but after seeing it, we feel compelled to tell the world! A year after “Star Trek” was canceled, William Shatner joined with Doug McClure for this rip-off of “The Wild Wild West” as Old West secret agents fighting world crime from a ritzy San Francisco casino. With big Richard “Lurch” Kiel as “Moose,” an ever-changing palette of TV guest-stars from the day, and plenty of eye-candy for the guys to woo, this playful, lighthearted adventure was canceled after only 14 episodes. Way too soon; a hoot.

A very personal doc on the rise of openly LGBT elected officials throughout America, each telling their own tale from their unique perspective, with minimal use of news footage. There’s little if any discussion of politics (in the dirtiest sense of that word), keeping the focus squarely on the individual’s personal struggle and how it might apply to the viewer’s own experience.

We enjoyed this talky, low-rent horror for its nice sense of style, with a classic retro plot and artwork reminiscent of Charles Addams’ famous pen-and-ink sketches. Movie buff Brian Sutherland (“Grimm”) will win $50K if he can spend one night in a long-abandoned haunted theater, the scene of a gory murder/suicide long ago. He’s not afraid, but his psychic wife (Lisa Coronado) is terrified, which really ratchets up the sense of dread. Includes the short, “Morella,” and an entertaining making-of. Co-stars underrated actor Russell Hodgkinson, also from “Grimm”; worth your time.

A nice turnabout on the “frenzied hubby rescues his kidnapped wife/daughter” actioner, Cam “Twilight” Gigandet is the abducted husband of MMA star Gina Carano (“Fast and Furious 6”) who oh-so femininely dismantles a Caribbean island when Cam disappears during their honeymoon. And let us tell you, this gal can kick butt! The always entertaining Treat Williams shows up briefly, as does Danny “Machete” Trejo. Lots of fun.

Another of those entertaining-as-hell, long-running BBC cop shows you never heard of but will be addicted to in the near future. A trio of retired police officers are dragged back into service kicking and screaming to help solve the most baffling of cold cases. Beautiful Amanda Redman stars (for most of this season) as the Super in charge of the three, and despite their individual flaws and fears, the four generate some of the best, most human laughs imaginable while up to their elbows in bloody mayhem. This thing rawks.

While this tanked at the box office, it is still one of our favorite straight-out lights-on horror films — even if it does star (ugh) Guy Pearce. He and Robert Carlyle duel to the death — or at least desert — in this darkly humorous tale of cannibalism, madness and murder in the isolated Sierra Nevadas of 1847. Now on Blu-ray.

Frankly, these American-made Bible stories always crack us up; Jesus did not look like a buff-white Euro surfer-dude, he looked like those swarthy guys you always see being strip-searched at the airport! That being said, this is a heartfelt telling of the Jesus myth starring a bunch of largely white folks we never heard of, spun off from last year’s “The Bible” TV miniseries. Roma Downey returns as Mary, with Diogo Morgado as Jesus.

TINY: A STORY ABOUT LIVING SMALL

An intimate and very personal doc/diary about the nascent human desire to be self-reliant and the joy of being unencumbered by possessions. Christopher Smith buys 5 acres of rugged land high in the Colorado Rockies and sets out to build a home — a tiny home, on par with the average shed — despite having no real experience. He and his girlfriend are part of a growing movement away from our runaway consumer society, enjoying healthy self-sufficiency over rampant sloth. Remarkably good, despite (like everything else in the film) being a first-time DIY project.

WHAT’S IN A NAME?

A damn-funny French comedy about a young man (Patrick Bruel), about to become a first-time dad, pondering what to name his expected son. When he mentions his choice to the family over dinner, comments ensue, escalating brilliantly until everyone is in an uproar — just like in real life! Lots of love and laughs; lighthearted, knowing and wise: the very definition of a good indie movie.

More from this raucous collection of 8mm sex shorts made between 1960 and 1980, representing the world’s first true home-video products. These “peepshows” were shown in adult bookstores, abandoned urban theaters, living rooms and especially bedrooms all across the country, lubricating the spread of sexual freedoms, stimulating the sense of experimentation that spawned today’s society. Watch them anyway. John Holmes leads the parade with Desiree Cousteau, Candida Royalle, Chris Cassidy and others.

DEPORTED WOMEN OF THE SS

This horrid bit of celluloid slime is something of a time capsule of the short-lived ’70s Nazisploitation fad that gripped Europe. Italian-made, it stars a bevy of dark haired, dark-eyed young nudie-actresses who are rounded up by the Nazis and shipped off to a slave camp where they are stripped, brutalized, violated and forced to be whores in service to the Third Reich. Completely without redeeming social value, it is nonetheless historical as the “high” point in the cleansing of Nazi hatred from the European cinematic palate.

This is one of the best-written shows on the tube. The U.S. seizes a SoCal beach house in a drug raid and turns it into a secret residence for undercover agents. But what would life be like for a group of people with secret identities and other lies on top of lies, always aware that a single slip of the tongue or the slimmest of unguarded moments could spell tragedy for themselves, their contacts, their families and their partners still in the field? A deep, complex and brilliant drama with the sexiest cast imaginable.

A look at one of the world’s most respected theater directors. With an uncanny ability to coax remarkable and intimate performances from his actors, Brook forces them to explore their most primitive fears and joys, many from deep in our collective human subconscious, evoking the powers of religion, myth, and ritual as necessary to help actors find their emotional centers. A must-see for any fledgling actor or fan of the theater.

Comedy Central’s resident lazy, dimwitted, beer-besotted, drug-fueled telemarketers are back with more unpredictable lowbrow shenanigans. Clearly inspired by “The Office,” a trio of slackers (Blake Anderson, Adam DeVine, Anders Holm) do an hyper-animated update on Cheech and Chong, making life miserable for their employer. It may sound juvenile but rises above its boring sitcom roots by sheer unpredictability and just a hint of true inspiration in each episode. Our favorite this season is when the boys try to get Alice (Maribeth Monroe) laid as part a scheme to hold a fish fry.