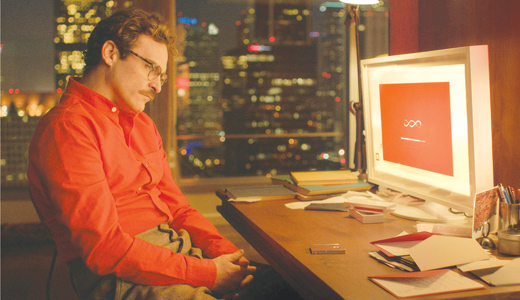 Despite the highly praised performance of Joaquin Phoenix in this “falling in love with Siri” experiment, the real star is director Spike Jonze, who makes us give a damn about Phoenix’s wimpy, whiny, sad-sack lost soul whose lonely longing is so great that he develops an intimate relationship with his cell phone. Or something like that. Scarlett Johansson gives voice to the computer, which is designed to intuitively sense what the user wants — which, in other hands, might have resulted in a wacky sex-comedy. Amy Adams and Rooney Mara complete the cast in this look at how seriously fragile we humans are.

This based-on-a-graphic-novel continuation of the Frankenstein tale was royally trashed at the box office, but there’s a lot to like as Aaron Eckhardt’s 200-year-old “monster,” Adam, finds himself at the brink of humanity’s downfall. Caught amid an apocalyptic war between gargoyles and demons, Dr. F.’s journal — and Adam’s existence — become weapons in the hands of leggy blonde scientist Yvonne Strahovski (TV’s “Chuck”). Ultimately a flashy, fun, silly, CGI-actioner with a great cast including the lovely Miranda Otto, the irrepressible Bill Nighy as the demon king, and Caitlin Stasey from “Reign.”

For the first hour, this follows a distraught father (Michael Thomson, TV’s “White Lines”) searching for the sadistic killer of his young daughter. But when he discovers who the murderer is (we won’t spoil it), he goes completely insane, implementing carefully researched, gut-wrenching torture techniques that will keep his victim alive and in blood-drenched agony for a week or more. Not really a “good” movie, but timely, nicely paranoid and very satisfying to those who enjoy a brutal splatterfest done with remarkable realism. Gory as hell.

First-ever Blu-ray release of a fondly remembered chestnut from the heyday of the dead-teenager movie. Starring no one you’ve ever heard of, with a plot that goes “College kids get sliced up by a maniac, credits roll,” this is a model slasher film in all its stupid, talky glory. Star and first-time actress Cecile Bagdadi was so awful that she quit acting after seeing herself on the screen. Her co-star, geeky Joel S. “Radish” Rice, also quit to become a TV producer, recently launching the animated “Bounty Hunters” series starring Jeff Foxworthy. See them before they became big stars!

Arnold Schwarzenegger, who first rose to fame under the name Arnold Stang (German for “strong”) in the bodybuilding doc “Pumping Iron,” joins with the same filmmakers in this updated look at the sport with help from narrator Mickey Rourke, Michael Jai White, Lou “Hulk” Ferrigno (also from “Pumping Iron”), Busta Rhymes and a score of massive musclemen preparing for the Mr. Olympia competition.

If this doc doesn’t make you sick, then check with your doctor — you may be dead. Famed filmmaker Roger Ross Williams turns his camera on the homophobic assholes infesting the American Evangelical movement. Unable to spew their hate at home, they’ve gone to Uganda where they can poison minds unencumbered by that pesky ol’ Constitution, whipping the poor, wretched, superstitious populace into a frenzy of biblical proportions, resulting in widespread violence against gays — with an officially sanctioned death sentence when discovered. Sickening.

While this “trapped with a stranger” 3 a.m. cable chick-thriller may not be a great film, it has one overwhelming reason to watch it: Ally Sheedy. Yes, it’s been a long time since “The Breakfast Club” and “Short Circuit,” but she’s still a beautiful lady and a fine actress. This movie plays as something of a bisexual bodice-ripper, with Sheedy as a rich heiress alone with her lover (Patsy Kensit, “Lethal Weapon 2”), when unwelcome stranger Stephen Baldwin appears at the door.

There were a lot of haters clogging the ’net when original co-star, Wenzhuo Zhao, walked out of production on this film. Yes, that caused a few hiccups, but Donnie Yen’s impressive and beautifully choreographed martial arts scenes more than make up for them. Also added were longtime Yen co-stars Andy On, Collin Chou and Ken Lo; their work here is first-rate, especially in the all-important action sequences. Plot? Who cares! This is the cutting edge of modern cops-and–Kung-Fu-gangster cinema. We liked it.

Three hot male former-teen heartthrobs — Zac Efron, Miles Teller and Michael B. Jordan — take a funny/hard look at adult relationships, particularly that whole “So, where is this going?” thing women love to spring on you once things get comfortable. But the women here are worth the torment, starting with Imogen “A Late Quartet” Poots, gangly-cute Mackenzie Davis of “Smashed,” Jessica Lucas from “Melrose Place” and Addison Timlin, who rocked “Odd Thomas.” A nicely R-rated romcom, well-written, with a few bare boy-butts.

If you are an actor or a fan of the performing arts, this deep, intimate doc/TV series on the inner workings of London’s famed Theatre Royal Haymarket will become a prized possession. Ian McKellen and Patrick Stewart headline what would become 172 sold-out performances of “Waiting For Godot” in the historic, century-old building. Eight wildly entertaining episodes filmed over six months, taking you from the front row to the back, to centerstage and backstage, meeting all the players — seen and unseen — that make up a theater family.

Master storytellers Jason Aaron and Ron Garney took a major gamble in developing their own take on the venerable Deathlok character (no doubt inspired by TV’s “Agents of Shield”), but it pays off in this time-travel tale of war and frosty foam as Wolverine’s beer-drinking overindulgence goes global. You think they’re gonna fight? Boy howdy!

A rather fawning look at the recent uptick in visible Bible thumping, which we cynically suggest is just a marketing gimmick. Which happens to work. See the various ways that too-proud Americans openly praise themselves and intimidate others while doing yoga, riding Harleys, handling vipers, surfing professionally, working rodeos, playing the trumpet, doing stand-up, and — our favorite — bloodying opponents in a brutal, staged “cage match.” Hypocrisy aside; isn’t it a sin to be so prideful?

Before Tom Hanks became a big-time Oscar winner, he made a living playing horndog party animals and spent two TV seasons in a dress. This may have been his biggest movie from those days, co-staring with Adrian Zmed and smokin’ Tawny “Holy Crap!” Kitaen, in this sex-farce/romcom built around an out-of-control bachelor party. Right up there with “Porky’s” as one of the most tasteless and demeaning movies from a truly offensive movie decade — and it’s funny as hell! A must-own; now available in a brilliant Blu-ray.

Nubile blonde model-cum-actress Gabriella Wilde (“Carrie”) is perfect in this remake/re-imagining of the 1981 Brooke Shield innocence-lost classic, with Alex Pettyfer as the requisite hunky guy who pops her cherry. But while the boy struggles to prove himself worthy, her wealthy dad (Bruce Greenwood) and his blue-collar father (Robert Patrick) are determined to stop this Romeo and Juliet tale before it reaches its Shakespearean conclusion. Fun.

Clint Howard (Ron’s bro) is the perfect social misfit in this ’80s mix of early PCs and demons from hell. Put down by his cadet buddies, he summons retribution at 8-bit resolution and 300 baud. The great R.G. Armstrong is perfect as the drill sergeant, with Joe Cortese, now a successful voice-over artist as the holy man, and Don Stark (Donna’s dad from “That 70’s Show”) as Bubba. Some nice ’80s bare boobs big hair, rat-demons and the occasional jockstrap (watch the shower scene), all combine to great effect in this unredeemable piece of celluloid nonsense. Highly recommended.

There are a lot of reasons to check out this first-ever Blu-ray release of a John Wayne war classic, the first being Wayne himself who was at the top of his game in 1942. The second is Mae Clark, most famous for playing Dr. Frankenstein’s fiancee, Elizabeth, 10 years earlier. But the best two things about this gritty, raucous “kill the enemy or die trying” combatter are Theodore and Howard Lydecker, the famed pioneering special-effects wizards who created all of the film’s spectacular dogfights — never topped to this day — without using a single actual airplane! A must-own.

FRENCH FOR KIDS: DEDANS ET DEHORS (INSIDE AND OUT)

This live-action/animated outing, part of a series on teaching young children a furrin’ language, is part of the ever-expanding wave of language-learning sets to be found at your local vidstore. Why the increase? Because with all the supposed intelligence building to be found in most “educational” kidvids, nothing truly delivers smarter rugrats quicker than having them learn a few words of another language. And given that our country seems to be getting dumber by the day, can you really afford not to boost your kids’ IQ? Buy it. Quick.

While this could be construed as just another damn reality show about a crazy-hot woman who will say or do anything to get on TV, we have to admit that wife, mother, model, nude goddess, author, actress and entrepreneur Kendra Wilkinson Baskett seems to be the real thing. A buxom bombshell with unbelievable energy and no knowledge of the word “boundaries,” she blows through life like a blonde tornado — in this season in a charity celeb high dive competition and throwing the world’s largest bachelorette party. Making the world a better place, one smile at a time.

This run-of-the-mill Limey revenge/splatter flick rises above the genre with superb young actors and a focus on their relationships instead of the grue. Martin Compston (“Strippers vs. Werewolves”) is inconsolable after the beating death of his brother, until falling in with his bro’s best friend, Piggy (Paul Anderson; Colonel Sebastian Moran from “Sherlock Holmes: A Game of Shadows”). This leads him to a dark world of revenge and retribution, where he eventually learns the truth about Piggy, but by then it may be too late.

The great James “Babe” Cromwell is simply marvelous, as always — and who wouldn’t be, working next to Geneviève Bujold?! — in this heartwarming tale of an 80-something couple, still very much in love, but needing a more oldster-friendly dwelling. So Cormwell decides to build it. From scratch. Cutting down his own trees, milling it into lumber, and hammering each nail, all to plans that exist only in his mind. The local building-code people have a shiitake-hemmorage.

Kristen Bell returns to the character that made her a star in this fan-demanded, Kickstarter-funded dramedy about the former high-school sleuth. She’s reluctantly back in town for her class reunion and long done with investigating when she gets sucked into a murder mystery to help old flame Logan Echolls (Jason Dohring). If you were a fan (and who wasn’t?), you’ll love this; newcomers may find all the Neptune in-jokes a bit thick. Far more comic elements than the TV show, but most of the old gang is here, the writing spot-on, and the pace as spry as ever. Wonderfully welcome.