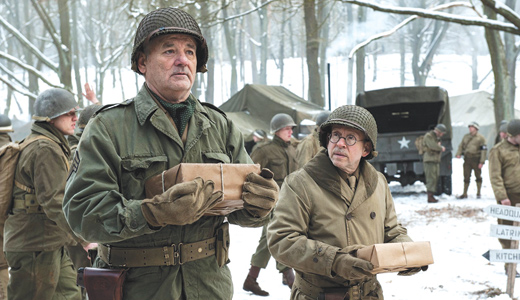 There’s an old adage in Hollywood about the career-ending curse of working “with animals or kids,” to which some have added, “or in sword and sandals.” Kit Harrington from “Game of Thrones” challenges that belief and drags Emily Browning — who has made some out-there career choices of her own — into the mix, along with Carrie-Anne Moss, Adewale Akinnuoye-Agbaje and Kiefer Sutherland. Gladiator action, senatorial dirty dealings, PG-13 lust and real actors falling out of real, speeding chariots all come to a slam-bang finish when the local mountain explodes. Gangs o’ igneous fun.

An entertaining look at the real-life exploits (sort of) of an overeducated WWII platoon whose job it was to rescue as much of the Nazi’s purloined artwork as possible. With the Cast of the Gods — George Clooney, Matt Damon, Bill Murray, Cate Blanchett, John Goodman, Bob Balaban and more — this could have been a truly over-the-top madcap war-comedy, but writer/director Clooney opts for education and pathos as the seven erudite museum directors literally risk their lives to save the artwork from destruction. Murray, of course, can’t be contained, providing some of the best lines. Entertaining.

Kevin Costner is clearly having a ball just goofing off in this “spy who wants to quit killing and get closer to his estranged family” thriller. Of course, the plot demands that he babysit the daughter he hasn’t seen in 10 years while hunting down a deadly terrorist. Silly spy fun that’s almost a spoof of spy flicks with Hailee “True Grit” Steinfeld as the teen daughter, Connie Nielsen (Lily Gray from “The Following”) as the wife, and Amber “Boom Boom” Heard as the hottest blonde on the planet.

A surprisingly good Afrocentric re-imagining of the classic 1986 romcom that made stars of Rob Lowe, Demi Moore and James Belushi. This one stars this week’s flash-in-the-pan, Kevin Hart, plus Michael Ealy, Regina Hall and sexy Joy Bryant (famous for her topless photo spread with 50 Cent). Fueled by great chemistry between the leads, this would have been better without motor-mouthed Hart, but the rest of the cast keeps his tirades to a minimum. Worth a look.

This Limey mismatched-buddy-cop dramedy is a hoot, largely because of the undeniable chemistry between stars Warren Clarke and Colin Buchanan. Clarke is big, older, grumpy and wildly politically incorrect; Buchanan is younger and wiry, with a mouth that goes non-stop. Frankly, these guys hate each other. They respect what each brings to the table and are fully away that they are better together than apart, but they still don’t hesitate to take a shot when the chance arises. Season 9 starts with a bang when black-market body parts are traced back to a scandal-ridden hospital — where Pasco just happens to be a patient in the neuro ward! Addictive.

The always-scary David Morse and “Glee”’s late Cory Monteith (in his final screen appearance) are terrific in this tale of an overzealous cop (Morse) trying to kill newly-released ex-con Monteith, lest he reveal something icky about the cop’s past. A real, honest-to-God street-level druggies-and-bad-cops action/thriller with Ciaran “Game of Thrones” Hinds as the chief. Our vote for the best thing Cory ever did.

THE RIGHT KIND OF WRONG

This movie charms, not by emulating every other romcom on the planet, but by rejecting the premise completely. Ryan Kwanten (“True Blood”) is a loser: a failed writer with a shit job whose ex-wife writes a blog about him called “Why You Suck.” Then, on the day of her wedding, he meets and falls instantly in love with a beaming bride-to-be (Sara “Vampire Diaries” Canning) and must convince her that he is worth taking a chance on. Not the greatest movie ever made, but engrossing, original, heartfelt and clearly in love with its characters. Worth your time.

It was inevitable that someone would make a movie of this popular YA book series: It has “vampire” in the title. Zoey Deutch and Lucy Fry star as 17-year-old best friends who must deal with all the pressures of high school, plus the dangers of being a Moroi (peaceful mortal vamp) and her Dhampir (half-vamp/half-human/three-quarters cocker spaniel) guardian. There are also evil “real” vamps called Strigoi to complete the high-school social allegory and provide drama. Kinda fun, some good gags, a hint of virgin lesbianism and hunky bad boys with Gabriel Byrne, breathtaking Sarah Hyland from “Modern Family,” and Joely “Nip/Tuck” Richardson. Certainly no worse than “Twilight.”

WAY OF THE WICKED

Christian Slater goes slumming as a preacher in this quick, low-rent shocker co-starring Vinnie “X-Men” Jones, winsome Emily Tennant and Jake Croker as the baddie. Slater’s the one who warns policeman Jones about a new bad guy in town (Croker), with an eye on the cop’s impressionable daughter (Tennant). But it turns out the real evil is more supernatural: an immortal force that demands more psychic protection than the law can provide.

WEEKEND OF A CHAMPION

Famed filmmaker Roman Polanski is a life-long auto-racing junkie who, in 1971, spent a weekend with his hero, driver Jackie Stewart, as he competed in the Monaco Grand Prix. The result of that weekend was the 1972 doc “Weekend of a Champion,” a masterwork of camera, light and sound that redefined the art of cinematography. For this 2013 re-release, the filmmakers took advantage of all the latest technology to sharpen the images and sound, adding a postscript where the two take a look back at a gilded age, their friendship and the sport.

Rebuilding the former site of the World Trade Center has taken over a decade and cost some 20 “billion-with-a-B” bucks, much of it spent dealing with the crazed political, social and religious furor among hundreds of interested parties, yielding thousands of lawsuits and millions of contradicting opinions. At the core are the families of those who died, including first responders, and the notion of what we as a nation owe them. This doc takes a look at that whirlwind and Larry Silverstein, the much-maligned real estate developer behind the project. Interesting.

This no-budget queer comedy plays like a movie version of TV’s “Modern Family,” with two gay dads (Chad Darnell of “Lost” and Rib “The Bay” Hillis) becoming increasingly obsessed with a first birthday party for their adopted child. While we thought the similar short, “Groom’s Cake,” which inspired this, was more focused, this has a parade of terrific guest stars including Helen Shaver, Lee Meriwether, Jane Badler and supermodel/actress Jennifer Gimenez (“The Bold and the Beautiful”). Fun.

A low-budget shocker containing every cliché in the book, yet succeeds at being seriously spooky and very disturbing thanks to beautiful cinematography and an even better looking cast. Inspired by a true event, a group of collegiates go exploring an abandoned hospital where they become possessed by the spirits of insane inmates whose cremains they accidentally inhale. “Entourage”’s Maxim babe Inbar Lavi leads the pack, with Holland “Teen Wolf” Roden and damn-hot Alesandra Assante (Armand’s kid) close behind.

This seemingly run-of-the-mill Martial Arts four-fer is a treasure trove of masterful Kung Fu action, including work by Kwan Tak Hing. For the unwashed, Hing originated the role of Wong Fei Hung — the part that would later make Jet Li a star — in literally hundreds of films. Here he joins with Sammo Hung in a classic crimer, “The Skyhawk.” Also included: the underrated “Manchu Boxer” (Anthony Lau Wing, Sammo Hung), “The Dragon Tamers” (John Woo directing) and a hidden gem, “The Association” (1975), starring a who’s who of SK and HK fighters.

NO GOD, NO MASTER

David Straithairn from “Alphas” gives a surprising performance in this tale of mail-bombs in 1919, inspired by real events. He’s the agent assigned to halt an unknown perp’s reign of terror amid runaway government overreach and a public that is all too ready to give up their liberty in return for safety. Nice parallels to today’s ever-tightening grip by those dedicated to keeping us “secure” are obvious, with Ray Wise and Sam Witmer adding dramatic spice to the mix. Would have been better if R-rated, but what wouldn’t?

History quiz: What stopped Hitler’s conquest of the planet? Uh, the combined armies of the free world? Nope, it was the brutal Russian winter: His attempt at taking frozen Stalingrad decimated his troops and depleted his resources, leaving him with only a fraction of his forces to hold onto Europe. This film — one of several recent titles on the subject — is a Russian-made military soap-opera about the struggling citizenry’s deeds, noble and ignoble, and a band of patriotic soldiers protecting the populace from the unscrupulous. And the two hot women who made it worthwhile.