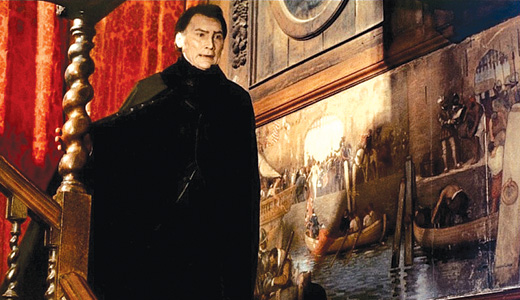 This largely forgotten, much maligned, highly underrated, made-for-TV version of Bram Stoker’s Count — made flesh by Curtis, the man behind such great fare as “Dark Shadows,” and master horror writer Richard Matheson — finally claws its way into the Blu-ray light. Jack Palance is terrific as the snarling, vicious throat-ripper in gentry’s clothing, though few today remember the movie’s premiere. Why? Because of Richard Nixon! Tricky Dick broke into the broadcast on Feb. 8, 1974, to announce the resignation of VP Spiro Agnew, pounding a ratings stake into the hearts of horror fans everywhere.

The inimitable Newhart plays a quiet Chicago psychiatrist with an office full of veteran nut-jobs and a home decorated with gorgeous, fiery Suzanne Pleshette in this, arguably the greatest sitcom ever made. All 142 episodes featuring the Supporting Cast of the Gods, including Bill “I Dream of Jeannie” Daily, angry Jack “Mr. Carlin” Riley and director Peter Bonerz as the dentist next door, all finally available in a 19-disc boxed set — including the never-before-released-to-vid final two seasons! — plus sublime bonus goodies like the unaired pilot and 1991’s hilarious 19th anniversary special. Without question one of the top 10 video releases of the decade. Buy it, uh, buy it, buy it now.

Right up front: This is one silly damn movie. You can’t take it seriously, so just lay back and enjoy as art curator Colin Firth devises a plan to swindle rich asshole Alan Rickman, with help from screwy-but-beautiful rodeo-mamma/sexpot Cameron Diaz. The script comes courtesy of the Coen Brothers, inspired by the 1966 Shirley MacLaine/Michael Caine movie (and bits of “The Pink Panther” from that same year). A ridiculous, implausible, old-fashioned caper flick like they just don’t make anymore.

HOUSE IN THE ALLEY

This Vietnamese horror is a real treat for fans of Korean-style spookers where the sense of “ick” builds slowly to a slam-bang finish. A happy young couple’s joy in their new home turns to horror when the wife miscarries. She’s inconsolable, keeping the infant’s body with her, refusing to bury it, while having strange, weird visions that spawn brutal acts of violence. It’s up to the husband to uncover the secret of the house before it claims two more victims.

Yes, it’s yet another SyFy Channel end-of-the-world CGI crapfest — not like that’s a bad thing! A bunch of familiar TV faces and second-string stars celebrate the Fourth of July until the Earth is attacked, both from the skies and from underground in this throw-everything-against-the-wall-and-see-what-sticks stinker. A blatant rip-off of Roland Emmerich’s venerable 1996 hit, but as these things go, this one is damn good, with Andrea “50/50” Brooks as the requisite babe and Tom Everett Scott as the prez. Hacker/nerds Emily Holmes and Iain Belcher save the Earth. What more could you want?

More great stuff from Guy Pierce (who we usually avoid) as the titular Australian former attorney who now walks the urine-soaked backstreets of Melbourne. At heart a film noir straight from the days of Bogie and Bacal, yet surprisingly funny — even sexy — as gumshoe Irish reluctantly investigates a drug overdose, only to discover crimes from his own past. Based on Peter Temple’s “Dead Point,” the exceptional writing and cold, distant portrayal by Pierce makes this absolutely riveting. There’s nothing to compare it to on American TV; our highest recommendation.

JOURNEY TO THE WEST 2

One of the more entertaining martial-arters of recent years; a welcome return for writer/director Stephen Chow (“Kung Fu Hustle”). Zhang Wen plays a demon hunter who bests a trio of colorful monsters, then takes them as his disciples in a grand quest (to be completed, no doubt, in a sequel). With Shu Qi (“Tai Chi Hero”) as the love interest/cute-and-sexy butt kicker and brains of the operation, this is modern comic Kung Fu at its best.

A none-too-serious yet remarkably entertaining series from Australia, with Essie Davis from TV’s “The Slap” as Miss Phryne Fisher, a shapely private eye who rules the streets of 1920s Melbourne with a pearl-handed pistol in her purse and a tongue sharp enough to cut a man off at the knees. Fearless, sexy and resourceful, she trusts only her maid, Dorothy (Ashleigh Cummings, “Puberty Blues”), and occasionally a pair of hunky policemen, as she sashays and purrs her way into and out of trouble with style, grace and a bit of titillation. Wonderful stuff.

One of the best remembered of all the “Friday The 13th” killer-at-a-summer-camp slasher rip-offs, largely due to clever plot twists and an unforgettable, over-the-top ending. The first film of long-running horror-vet Felissa Rose (who has nearly a dozen films coming out in the next 12 months) as the shy orphan girl sent to camp with her cousin Ricky just as people start “accidentally” dying. Lots of bare boobs, buns and one truly extraordinary penis in the best ’80s tradition. A must-own.

Aka “Bron/Broen,” this subtitled Swedish/Danish series is remarkable and unlike any similarly named or plotted TV work out there. When a woman’s body is found on the bridge between Sweden and Denmark, both police forces investigate. But this is actually a twisted double murder! There are two bodies, cut in half and laid carefully together as a calling card by the murderer, who then goes on a killing rampage. A brilliant cast, flawless writing and a gifted director driven to raise the bar on TV drama combine to make this an unforgettably visceral experience. Worth the read.

How could we pass up a title like that? Trevor “Mean Creek” Morgan is despondent over losing breathtaking Analeigh “Hung” Tipton (no doubt!), when he stumbles onto brown-eyed hottie Elizabeth “From Within” Rice trying to off herself from a great height. He “saves” her, only to incur her comic wrath in this odd drama about … well, we’re not sure what the hell it’s about, but it is definitely entertaining, particularly the extended co-ed bath scene.

Aidan Bristow is the hunky and popular high-school jock in this unique, surprising drama. He didn’t know Claire (Jennifer Baute), killed by a drunk driver, but comes to understand how he and everyone he knows is intimately connected to her death. And when he points this out to his friends, their dark response surprises him. He becomes ostracized and ever more obsessed to know more about her, even to the point of madness as he suspects that he, himself, may have inadvertently had a hand in her demise. Worth a look.

More Cartoon Network fun, capturing the friendship and adventure that made “How To Train Your Dragon” such a hoot. Best of all, most of the original voice cast — including Jay Baruchel, America Ferrera and Christopher Mintz-Plasse — return, making these stories mesh seamlessly with the rest of the fire-breathing franchise. Two discs of great learning adventures astride flying dragons; what else could you possibly want in a cartoon?

Great, deadly drama set during the Japanese occupation of China starring Yi Zhang (“Caught in the Web”) and Xinyi Zhang. YI is on a personal vendetta against the Japanese invaders, even allowing himself to be captured by a local mafia run by Fang (Xiaoming Huang) as a cover. When Fang discovers this deception, only Fang’s sister (Xinyi) can save him, and the three eventually form an uneasy and unlikely force for vengeance.

Warning: If you watch this, you will find yourself ordering the first two seasons! Krister Henriksson plays an aging police detective, filled with regrets as he enters the twilight of his career. Estranged from his family, hated by his by-the-book superiors, and clearly stifling the progress of his junior partner, he can nonetheless get into the mind of a killer like no one else. Whether they be pedophiles, white slavers, spies or simple human garbage, he sees their thoughts in every clue. This is a profoundly good series — a bit rough for squeamish U.S. tastes at times — about very flawed people trying to do the best they can in an imperfect world. Addictive.