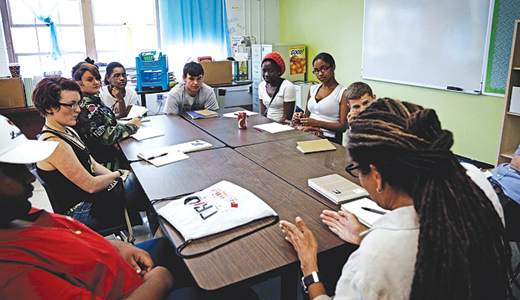 I live in a neighborhood where it’s normal to have cracks in the sidewalk, on the side of your house, in the windshield of your car — cracks that show something has been through hell, but they are seen as warrior scars and not a disgrace.

These are the words of a voice we don’t hear often enough.

Written by Taylor “Nala” Winemiller about South 40th Street, this is just a snippet of “Our Shawnee,” a soon-to-be-released book written by eight seniors from the Academy @ Shawnee as part of the Louisville Story Program.

“We see the world in a way nobody else does,” explains Asia.

Cody says that one of the perks of participation — aside from the promise of $500 upon completion — was being able to dispel the reputation that the Academy @ Shawnee is a bad school. Though it has chronically underperformed, new efforts, like a three-mentors-for-every-student initiative, have the administration and students excited about the turnaround possibilities.

For Callie, the weight of the project hit her during a well-attended kick-off dinner held for Louisville Story Program. “Our Shawnee” was partially funded by a successful Kickstarter campaign.

“That (kick-off event) is when I realized this wasn’t just about 10 people in a room,” she explains, “that there were hundreds of people excited and behind us.”

Darcy Thompson, a former teacher who now works for Teach For America, created the program and, along with Brian Weinberg and Joe Manning, led students through instructional workshops all throughout last summer. The students also met and received training from local journalists, photographers and poets, including National Book Award winner Nikky Finney.

From their writing came the book’s personal essays, which vary from exciting to heart wrenching. One takes a reader through the process of learning how to fly an airplane, a unique academic opportunity offered through the Academy’s aviation program. Another recounts a traumatic brain injury and the lingering effects on academic goals. Yet another documents the transition from gang member to college-bound scholarship winner with brag-worthy standardized test scores.

“Age doesn’t determine wisdom,” says Jodeci. “Everybody has been through something.”

Awkward hugs and praise. That’s what Callie knows awaits her next Wednesday at the book-release party, which will be held at the Muhammad Ali Center. “I’m so nervous,” she adds, before pondering aloud where she can buy makeup that can handle the tears she knows she’ll cry that night. “I don’t need to be that Goth kid with the mascara running down her face.”

David admits he’s nervous, too, but maybe more nervous-excited than nervous-nervous. “I want to hear feedback,” he says, before throwing in, “I’m Shawnee famous now.”

Sensing the twittering of young nerves, Thompson tells his students to remain calm and just enjoy the moment. It will go by quicker than they realize. They may not be used to the spotlight on them, but they have more than earned it.

Jodeci nods knowingly. Teachers and classmates have been stopping them in the hallways asking if the book is out yet. Friends are asking when they’ll be able to read the stories they have been working on for almost an entire year. “People are treating us like we’re celebrities because we wrote a book,” she says.

“The initial reaction some had at the beginning of this was that teenagers wouldn’t be willing to commit and give up their summer, or they’d self-select and we’d wind up with only the highest achieving students,” says Thompson. The reality, however, has been far different.

Thompson says the kids represent a normal cross-section of the Academy @ Shawnee. Some are high achievers, some are less so. They come from a variety of racial and social backgrounds. If any of them knew each other prior to spending the past year together, it was only in passing. Yet now, they describe each other as an “awkward family.”

Louisville Story Program hasn’t finalized its next project yet, though Thompson says he is talking with people familiar with The Dirt Bowl. A longtime Shawnee staple, The Dirt Bowl is “on the surface, a basketball tournament,” but like a lot of things, “so much more that that to a community."

Due to a reporter’s error, the original article described the the Dirt Bowl as an Algonquin staple. While it began there, the tournament was moved to Shawnee and has been there for 40+ years. The article also incorrectly stated that the Network Center for Community Change financially supported Louisville Story Program. The LEO regrets these errors.